I appreciate dance performances that are different; that take risks; that are visual shocks to the status quo. Most of the time. But I don’t enjoy dances, however audacious they may be, that make intelligence and technique subservient to form, and that are contradictory, ponderous, pedantic, and self-important. BiT, which Compagnie Maguy Marin brought to the Joyce Theater last week, is all the above. And it gives avant-garde a bad name.

The point of the piece, at least according to advance publicity, is that sexual violence against women is both pervasive and reprehensible. Fair enough, and its topicality is a bonus. Further, advance audience advisories cautioned that there would be nudity and violence. Also, fair enough. With those predicates, at the very least one wouldn’t expect to need caffeine to get through the piece. But after it became clear that even the shock value, as staged, was more weird than shocking, I doubt that even strong coffee would have helped stifle yawns. And after it becomes further apparent that what Marin is expressing is a poorly staged tantrum not so much against sexual assault but against society (Western society) as it has come to be, the dance becomes both a manifesto and a betrayal. Ultimately, a lack of clarity isn’t the problem with BiT – the muddy message, and indulgent delivery of it, is. 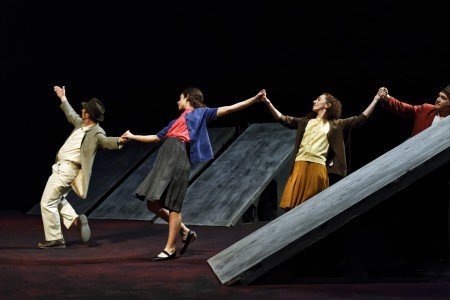 The piece begins with the six-person ‘primary” cast aligned 3/3 alternating by gender, dancing a stereotypical “folk dance” – legs moving forward, back, sideways, one leg crossing the other, with steps constantly being repeated – while they hold hands. The dancers move in a traveling line (occasionally in a circle) happily in, under, around, and atop “mountain” slopes (angled painted plywood, or metal, or some other substance). The accompanying music is all rhythm, and all electronic and/or percussion. As the sound’s tempo increases and the lighting gets darker, the tempo and timbre of the dance do as well. The dancers, who appear to be villagers – common folk – remain happy, and gradually remove outer layers of clothing, implying that what everyone in the audience knew was about to happen was being presented as some sort of low-decibel prelude to Dionysian revelry.

Very slowly (way too slowly) the couples separate out. Eventually one man leads his companion behind one of the slopes; she seems suddenly unwilling, but goes (or is cajoled to go) where directed. A few moments later, the man emerges and adjusts the zipper on his pants. 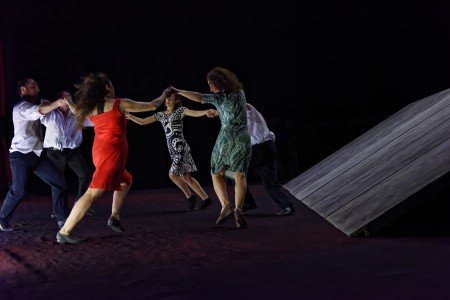 Ok. So this is the sexual assault, which takes place out of audience view and in the context of a (perhaps deceptively) happy occasion.

Next, a red fabric or malleable plastic is unrolled down one of the slopes, the implication here being that the unrolled substance is supposed to be seeping blood. Then one by one the dancers in varying stages of undress, emerge and writhe slowly down the slope atop the “bloody” platform as if in a trance. 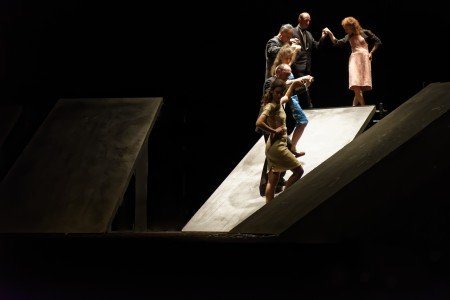 Ok. So the sexual assault is generalized to all three men. But why do the men, the presumed assailants, look like they’re dazed victims also?

After the bloodied semi-clothed bodies make their way in fits and starts down the slope, rolling over each other in the process, sexual activity which was initiated out of view resumes at its base, with bodies humping other bodies. And I noticed that one of the bodies sexually assaulting another was a woman. On a man. Wait. What? The woman’s assaulting the man? So is Marin saying that everyone’s a victim? That’s what this dance is all about?

Gradually the dancers retreat behind the slopes, the stage darkens, the accompanying sound becomes eerie rather than pulsing, and three spotlessly clothed women looking somewhat like Renaissance paintings of herald angels emerge one by one from behind the slopes, which now have the sense of slanted cemetery stones or a Stonehenge-like ritual array. Then, excruciatingly slowly, the original six dancers reemerge, five of whom are outfitted like genderless monks wearing distorted face masks, the sixth a decrepit rag doll also with a distorted face mask (the initial “victim” I think, but that fact seems irrelevant). All wear robes. These “monks” and the “monk” rag doll look like living dead – as if they are representative of excavated assailants and a victim from the Dark Ages. Literally. The monks then take turns sexually assaulting the helpless female (there’s no nudity here, partial or otherwise), who seems powerless (or unwilling) to resist – or is already dead. 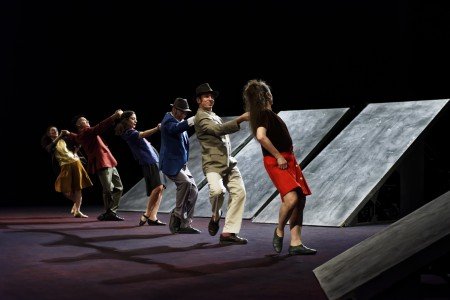 Although all that’s apparent is the absence of anything resembling clarity, in hindsight Marin’s intent is quite clear: whatever they (all) have done/are doing has been programmed. Consequently, the fault is not with any one individual male or all men, but with society as it has evolved. It’s all ingrained ritual sexual aggression. Blame the monks.

Then the lights come back up, the six original dancers reappear doing exactly (literally) what they did in the piece’s opening section, except instead of being dressed like “ordinary” country folk cavorting, they’re dressed for business (the men wear ties), and implicitly the “cavorting” is the sexual dance between men and women that takes place daily. The audience doesn’t need to be told how that will end – they’ve already seen it.

Many members of the audience left the theater while the dance was in progress; and although I must admit that roughly a quarter of the remaining audience gave the cast a standing ovation upon the dance’s conclusion, there’s no way to know whether that represented enthusiasm for the dance, the dancers, or the cause. Regardless, BiT (the program note doesn’t explain the title’s meaning; if it hadn’t premiered in France, I might think it’s a contraction of “be it”) might be fine for purists for whom the movement, no matter how repetitious, is the message, but it’s a waste of time for those who prefer a bit more.