For my second installment of Cuban dance as part of the Kennedy Center’s Artes de Cuba festival, I saw Compañía Irene Rodríguez, led by executive director, prima ballerina, and choreographer Irene Rodríguez, who according to the program notes is “highly regarded in Cuba as a cultivator of the Spanish dance genre.”  The company, in its sixth year, has eight dancers, plus Rodríguez herself, its unrivaled star. Its sole performance was sold out. Spanish speakers aplenty sat in the audience. I also noticed a number of young girls, perhaps aspiring flamenco dancers themselves.

Compañía Irene Rodríguez’s performance was a crowd pleaser, if not a critic pleaser. I imagine the little girls were delighted with the long ruffled dresses and pretty high heeled shoes of the female dancers. The ensemble brought a definite buzz of energy, and so did a burgeoning thunderstorm, which could be admired from the Kennedy Center’s expansive rooftop during intermission.

For me, however, only in the final solo by Rodríguez did the evening really come to life. The remainder of the program hovered around cuteness and pure entertainment, sort of like a TV-special version of flamenco from Cuba for a general audience. I’m not terribly fond of cuteness when it comes to dance, especially when there’s a meaty theme that’s overlooked in favor of more shallow showmanship.

The first piece on the evening’s program, Emigrantes, purports to address the immigrant experience in Cuba, but it captures only a tiny bit of genuine emotion. The rest is an over-the-top soap opera, where of course the boy (a Spanish migrant danced by Marlon Fernández) gets the girl (a Havana sweetheart danced by Rodríguez). There was a voiceover at the beginning, and a few words were spoken here and there by the dancers. All was in Spanish, which I don’t speak, so I can’t say what was revealed.

I don’t mind a good love story, but I cringed when Fernández aggressively and repeatedly kissed Rodríguez’s arm from her fingertips up toward her shoulder. Although she initially spurned him, with this act, somehow she quickly became his lady. Also irksome to me was the clichéd use of suitcases, staring into the distance, and even the sounds of a boat’s horn to indicate travel and longing. I really prefer it when dancers tell a story through their movement, rather than relying on props. Surely there was a way for Fernández to relate his travel other than picking up his suitcase and moving with it from one side of the stage to the other, and surely there was another way to show he’d decided to stay in Cuba other than him kicking his suitcase triumphantly on its side.

The saving grace of Emigrantes was the different styles of Cuban dance that were introduced — dance battles between the immigrant, Fernández, and the Cuban men he encounters, wearing white with straw hats — even if the format was clichéd, too. The dance offs were, yes, cute, but educational as well. African-inspired instruments and dance fought against Spanish castanets and flamenco, and when melded, one could see the Afro-Cuban flair the program touts. 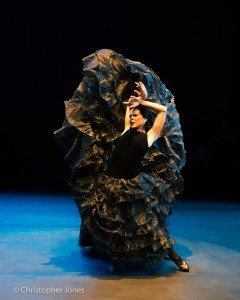 Another cute piece, El Mito, hit the stage after intermission. I felt more forgiving about this piece being cute, as its theme was very simple. Behind a low-hanging scrim, the audience saw only legs up to the knees. The legs were active. They strutted, they scooted, and when in unison, they powerfully shifted direction or synchronously jumped. And they were led by a pair of white heels (the rest of the shoes were black). The white shoes had to belong to none other than Rodríguez.

The feet engaged in a series of comic tricks to the amusement of a little girl in front of me. Dancers stood on one foot while holding up the other and shaking it in front of them. The little girl giggled. You might guess the ending? Rodríguez, in her white shoes, was lifted high into the air, above the line of the scrim, and she completely disappeared. Moments later, the shoes fell with a thud, and Rodríguez’s legs were nowhere to be seen. More laughter from the little girl.

The next two pieces, Tifoeo and Encontra2, featured a backdrop of bright sunset colors. Here, the flamenco dancing looked quite contemporary. Rodríguez’s choreography had the dancers arranged with different facings, moving in geometric patterns, including many diagonal lines. And pirouettes were sprinkled in as well.

With Solera, a solo by Rodríguez, rhythmically accompanied by the male dancers, clapping and hand-tapping on the cajón, a boxed-shaped percussion instrument, the night livened considerably. Rodríguez wore a shiny silver gown, and many times she leaned far forward to pick up the trailing hem in order to flaunt her lower legs. Flamenco seemed to be at its most traditional here, and was without a doubt at its most satisfying. Rodríguez’s feet acted possessed as they rattled rapidly against the floor. She kept teasing the audience, pausing as if she had finished, and then dancing even more madly than before. She slowly, in a sensuous manner, ran a hand down her long ponytail and then suddenly swung it high into the air and took off dancing again to the roar of the happy crowd. Her whole body shuddered as her back foot tapped like a mechanical woodpecker on high speed. Before she walked toward the back of the stage and the lights dimmed, she dramatically arched backward and held that pose for a prolonged period. Through this solo, I understood Rodríguez’s greatness. Particularly as a soloist, she commands attention and deserves it.