As part of JFKC: A Centennial Celebration of John F. Kennedy, DC’s own Company E performed a Kennedy Center-commissioned work titled (In)Security: Or, Jack and Nikki do the Cold War Tango. As its title suggests, the work centers on the relationship between the USSR and the United States during a critical period in American history. Uniquely, the performance was designed to take place on both the North and South Millennium Stages, simultaneously, along with dancing throughout the Kennedy Center’s Grand Foyer, and even outside. That means that the audience had to choose what action to follow when — it was impossible to take in all of the dancing at once. And that was fine with me.

(In)Security was conceived, directed, and produced by Paul Gordon Emerson, Company E’s Co-Artistic Director (with Kathryn Pilkington). Washington dance-goers know that Emerson once worked for the U.S. Foreign Service and is committed to international diplomacy through art. He was the perfect person to lead this project, but a plethora of other artists contributed. The program notes detail the extent of collaboration: in addition to six primary choreographers, including Emerson, there was an original score by Gavin Stewart; film and media by Emerson and Aidan Katsumi Dunning; costumes by Marija Djordjevic; lighting and technical design by Ari Korb and Owen Burke; writing by Emerson, Stewart, and Olga Sunyaikina; musical performances by Michelle Fowlin (soprano) and Wanzhen Li (violinist); guest artist Sirena, and a bunch of other dancers. Sometimes, of course, too many cooks spoil the broth, but not here. (In)Security succeeded, in my opinion, in giving its intense subject matter sensitive treatment that sustained audience attention — a real challenge in such a sprawling space. 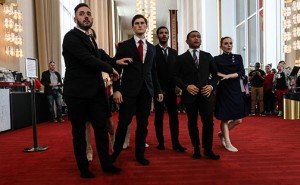 Presidents Kennedy and Khrushchev and their respective countrymen, at first on opposite stages, presented American and Soviet perspectives while the vast red-carpeted lobby stretched between them, a symbolic and literal gulf. Screens above the respective stages showed live video footage of what was taking place across the hall, or sometimes in the middle. The opposing figures approached and backed away and eventually physically engaged. There was a handshake, a wrestling match, poses for the camera, and even a funeral procession headed by a white horse. (Yes, you read that correctly, a white horse led a funeral march just outside the Grand Foyer). 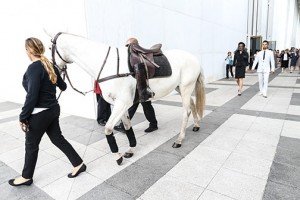 During the work, audience members were encouraged to watch in whatever manner they wished, whether selecting a single vantage point or strolling from place to place. I walked around a lot, but paused a lot, too, taking in the dancing as I pleased. When I saw the white horse on one of the screens, I went outside. I felt drawn to walk alongside the dancers as they exited. I appreciated the freedom. Many immersive dance pieces force audience members to participate, and it can be uncomfortable. In (In)Security, however, there was no wrong way to be part of the experience. And watching fellow audience members was fun as well. Little children joyously roamed, older adults stood still, enrapt, and vice versa.

I began my viewing on the Soviet side, admiring energetic folk dancing in colorful costumes and then the more anguished dancing in dull gray dresses for the women that followed. Subsequently, I strolled to the other side, where dancers in navy blue costumes represented the United States. They later departed the stage and clustered together as they danced through the lobby, first leaning heavily to one side, then leaning backward, and finally sneaking up warily within view of the enemy. The movement was dynamic and dramatically told the story of the feelings each side possessed. Besides the dancers that started out on stage, there were dancers placed here and there throughout the audience, and when they joined in dancing, it was a nice surprise (although not too surprising, maybe, since they wore no shoes and looked, well, like dancers, most with hair swept back and strong makeup). 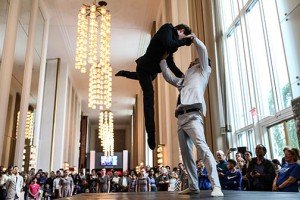 I thought this JFK-focused work was far more compelling than Frontier, Ethan Stiefel’s JFK-inspired space ballet that I watched the previous evening. While Stiefel’s choreography didn’t really move me, the dancing in (In)Security did. I think the biggest difference in my reaction may have had to do with my proximity to the artists. My seat for Frontier was only a few rows from the back of the theater, whereas for (In)Security, I could venture much closer to the dancers. That closeness has its rewards, particularly when the dancing is as powerful as it was in (In)Security. Ryan Carlough, of all the dancers, kept my attention the longest during the performance. He dances with amazing ferocity and has a bright future as a contemporary dancer.

Company E: I Never Dreamed It Could Be Like This: Leonard Bernstein at 100