I was last in the Kennedy Center’s Theater Lab in the 1980s when I had a brief opportunity to dance there. This particular theater has been used almost exclusively during the past 30 years for productions of Shear Madness, a comedic play popular with tourists that involves audience participation in order to help solve a hair salon murder mystery. It was fun to be in that space again, as it provided a trip back in time. The theater seems not to have been touched by many updates. The orange colored seats couldn’t be of a recent vintage. If you’re going back in time anyway to celebrate Leonard Bernstein, why not schedule this dance event in the aging Theater Lab? 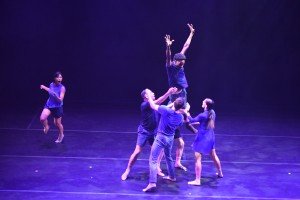 I’ve seen a lot of centennial performances lately — multiple tributes to The Rite of Spring, Aaron Copland, John F. Kennedy, Jerome Robbins, and now Leonard Bernstein. Sometimes the performances have been enlightening. Company | E’s May 2017 performance in honor of John F. Kennedy, (In)Security: or Jack and Nikki Do the Cold War Tango, was wildly creative and successful. Thus, I had high expectations for Company | E’s performance dedicated to remembering American composer and conductor Leonard Bernstein. High expectations can be dangerous, and unfortunately, my expectations were dashed.

I’ve sung the praises of Robert J. Priore’s choreography before and still believe he’s one of the most talented young choreographers in the DC area. But not even the best choreographers strike gold every time. Priore’s Bernstein work, I Never Dreamed It Could Be Like This: Inspirations / Leonard Bernstein at 100, left me feeling confused. Above all, when one attends a dance event in tribute to someone famous, one anticipates leaving with a new appreciation for that esteemed figure. Yet I gained no real insight into Bernstein’s life and art. On that level, the performance failed. 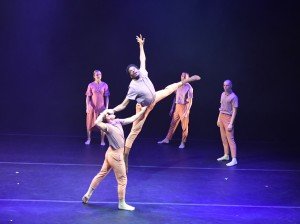 The Bernstein-themed performance failed in other ways, too. The costumes, by Priore and Company | E’s Co-Artistic Director Kathryn Sydell Pilkington, were unflattering and uninspiring, especially the boldly striped bottoms for the men in final section that looked like ill-fitting boxer shorts. The lighting design by Co-Artistic Director Paul Gordon Emerson didn’t flatter, either. The lighting in the second section, in blue hues, made the dancers look sickly pale, and the jumble of words and phrases that appeared on the floor and at the back of the stage weren’t incorporated well and just seemed distracting. All the haze didn’t help matters. The theater was filled with sticky sweet smelling fog that gave me a headache and irritated my eyes.

As for the dancing, I felt I could sometimes see what I imagined Priore had in mind, but more often I felt that there were execution problems. What might have been solid and attractive choreography if done well came across as sloppy and inelegant. And the energy level of the dancers fell short. From my vantage point, only Grace Cho on occasion looked like she was truly throwing her heart into her dancing, extending her movement and making a big statement. More punctuation was needed overall. There were many interesting phrases that repeated, but they became lost, the dynamics muddled. 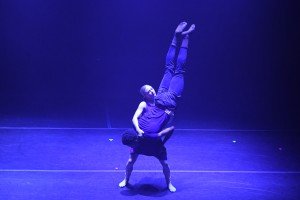 I admit that Priore’s choreography adequately captivated me in the first few minutes. In the first section, “The Composer,” I really liked the way a dancer’s hands wrapped around his or her face, elbows out, and circled, or the hands rested tightly against the chest. I also really liked hands that reached and shuddered like a mad mad conductor. There were also lifts in which dancers rolled up a partner’s body, or twirled in the air. All this twisting and weaving was intriguing. I was hooked only briefly, however.

The second section, “The Man,” was set to music by a variety artists that I guess Bernstein supposedly was inspired by, or maybe that inspired the dancers. Sure, I like Patsy Cline’s Crazy, but it seemed very odd in a Bernstein tribute. I’m open to creativity, of course, but this second section, with lengthy overlapping voiceovers by dancers talking about what they believe in, seemed out of place. According to the program notes, the dancers found themselves “telling our own stories.” Indeed, the focus shifted from Bernstein to the individual dancers. I understand that the dancers were purportedly expressing how Bernstein inspired them, but this idea just didn’t translate strongly on stage. I also understand from the program notes that much of the music the dancers hoped to use and had even created choreography to was “off limits” to them. I’m sure that was a huge challenge. Another challenge was that Prior danced in his own work. Ultimately, I Never Dreamed It Could Be Like This didn’t conjure Bernstein for me at all. 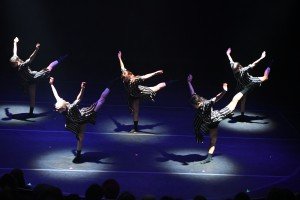 In the final section, “The Conductor,” the ten-member company danced to a recording of Beethoven’s Third Symphony conducted by Bernstein. The dancers here were out of sync. Leaps that should’ve been light looked heavy. Some of the conducting gestures resembled air traffic controllers more than a musical genius with a baton. I longed for the movement to have more contrast, for steps to be sharper, slower, and for there to be more stillness. Instead, the choreography was unrelenting and messy.

None of this should take away from reasons to celebrate Bernstein. Yet it added up to a missed chance to do just that.

Company E: (In)Security: Or, Jack and Nikki do the Cold War Tango