Do you remember Monchichi?  As I remember it, Monchichi was the Asian-sounding name of an unattractive stuffed monkey with a plastic face, and there was a catchy commercial jingle to go along with it.  So why would Company Wang Ramirez (Hongji Wang and Sebastien Ramirez) name a duet after this toy? The mystery is resolved within the work. When she was younger, Wang, who is of Korean heritage, was asked by a neighbor in Germany, where she was born and raised, for her name. She replied, “Ingrid,” hoping to please him, I suppose. He insultingly responded that he thought “Monchichi” was a more appropriate name for her.

Even if you didn’t read the program notes, you would quickly understand that Wang and Ramirez come from different places, with different influences. Ramirez, who was born in the south of France, comes from a family with Spanish origins. This pair of dancer/choreographers represent multiculturalism at its best. Monchichi is about their personal relationship, as well as the larger experience of clashing with someone from another culture. It’s an enjoyable exploration that’s well polished, accessible, and full of wit.

What is perhaps most stunning about Monchichi isn’t the dancing, but the set and lighting design, which are almost like third and fourth figures in the dance. The spare set design, by Ida Ravn, features a tree with stumpy branches that morphs frequently and dramatically in conjunction with Cyril Mulon’s brilliant lighting design. The tree changed from dark silhouette to chilly barren white. Occasionally it twinkled with blossoms. The scrim and stage floor changed along with the tree. From a grassy patch of green beneath the tree and a blue sky behind it, to colors ranging from a vivid red to velvety purple-blue. I found myself captivated by the varying moods and painterly scenes those changes made possible. I wasn’t a fan of the music, primarily composed by Ilia Koutchoukov, arranged by Fabien Biron. Electronic whooshes and clacks are a kind of blank slate, but I’m just not fond of those sounds.

In my opinion, Monchichi leans more in the direction of theater than dance. Yes, Wang and Ramirez danced throughout the roughly one-hour piece, but the object was storytelling. The dancing served to emphasize the separation between and coming together of the couple. In the beginning, Wang and Ramirez didn’t face each other, they faced in opposite directions, moving independently, as if completely unaware of the other. Very slowly, they approached, and their bodies turned now and then so a glance between them was possible. The dancing subsequently took the form of a hunt or chase. Then finally, actual confrontation. Like different species, they studied each other’s movements. Their different dance styles mimicked language differences. Ramirez showed off some hip-hop moves, Wang moved more like a contemporary dancer. The two swapped moves, like trying on new clothes (they do that, too!). Of course, ultimately they intersected and became able to speak the same language. 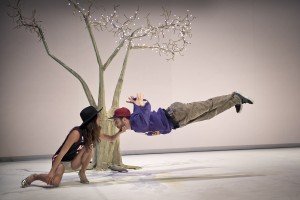 At one point, Ramirez tossed Wang some silver high heels, a pale blue dress, and a platinum blonde wig. Don’t we all sometimes wish people we knew were someone else, don’t we all sometimes put on an act that we think will impress others?  He dressed up, too, and the pair danced a kind of tango. He complained she always wants to lead. Eventually, he exchanged his fancy shoes for sneakers. Both dancers shed their outer layers, literally and figuratively, and got comfortable showing their true identities.

There were moments when the dancers spoke, and some voiceovers. A conversation between the dancers turned from pet names Ramirez called Wang to racist names. Wang screamed, “I’m not Chinese!” Even after they first connected, there were periods of engagement and disengagement. Wang and Ramirez talked aloud at the same time, sometimes in English and sometimes rattling on in different languages. “She’s Korean,” he said, while simultaneously she said, “I’m German.” “I’m French,” he announced, while she remarked that he’s Spanish. The audience roared with laughter.

I found Wang to be the more compelling dancer. She seamlessly alternated between liquidity and robotic jerks in a style the program describes as an “abstraction of hip-hop dance” that includes “influences of earlier martial arts and ballet training.” Ramirez tended to repeat movement, a lot of it low-to-the-ground hops over his own legs with his hands placed on the floor. Often his movement was significantly slowed, like street dance ooze. He delivered some surprises, though. Early in Monchichi, Ramirez jumped over Wang’s head and brushed her shoulders. Most successful were the waving ribbons they later created with their arms. Their hands joined, and the undulations they created together were mesmerizing. Fast and light as air, their arms rhythmically whipped as a single unit, more like waving tentacles of a sea creature than human limbs.

The audience was on its feet hooting and hollering at the end. Although the rowdy applause was warranted, the reception was so fiercely enthusiastic, I think, because the University of Maryland happened to be hosting the Mid-Atlantic North’s regional American College Dance Association conference, and dancers and dance educators made up a huge percentage of the audience.