Company Wayne McGregor’s Atomos begins with a group of thinly clothed slowly writhing dancers within a square block of light in an upper corner of the stage. They roll and twist and swap partners like creatures enveloped in primordial ooze. They lift each other, cling to each other and extend their limbs as if they’re testing their newly forged bodies. As the dancers execute relentless series of poses, their faces are blank. The meaning of the connections between them are elusive. Although they sometimes interact intimately, sliding off each other’s bodies, their emotions are unreadable, more robotic than human. Ballet technique ripples throughout Atomos, in spins and turns and crisply pointed feet, but the movement is contemporary. Upper bodies undulate and heads dip mimicking ocean waves or prayers and providing a kind of rhythm. McGregor’s choreography, in collaboration with the dancers, challenges both the dancers and the audience.

The music, A Winged Victory for the Sullen, a collaboration between Adam Bryanbaum Wiltzie and Dustin O’Halloran, is described in the program as “seven landscapes of harmonic imagination.” To my ears, the music was a combination of classical and electronic sounds. The lighting design, by Lucy Carter, plays a major role in Atomos. Dark colors predominate such that the dancers’ faces are often somewhat obscured. At one point, there’s actual purple haze. The design clearly places emphasis  on the movement quality, not the individual dancers. The costume design, by Studio XO, is simple and understatedly elegant: tight briefs, cropped tops, and leotards, in black, green, and brown, with some color blocking. Here, the emphasis is on the dancers’ bodies, especially their bare muscled legs, arms, and torsos.

The film and set photography, by Ravi Deepres, unfortunately doesn’t enhance Atomos. The video art is interesting, to some extent, but seems to serve little purpose, with one exception. In the middle of Atomos, black and white film footage of dancers on several mid-size screens that float above the stage at varying heights gives the hard-working dancers a break. When this footage is playing, the stage is otherwise empty. Other images on the screens (balls of fire, cityscapes, bugs, and lines of glowing green computer code), seen through complimentary 3D glasses, seem superfluous. Like the dancers’ connections to each other, the connection between the dancers and what appears on the screens is mystifying. Alone Deepres’s art is perhaps museum worthy, but when paired with dancing, it distracts. 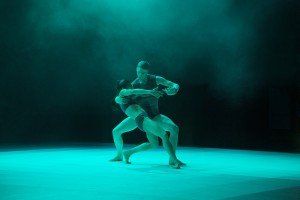 The other mystery is the program notes discussing the theme of bodies. While Atomos certainly evokes contemplating bodies, it doesn’t strike me as being particularly about bodies, save for the opening minutes. The approximately hour-long work feels like it loses focus quickly, and the dancing becomes monotonous. My issue with the choreography isn’t that it isn’t good, it’s that the movement speeds along so quickly and is extremely showy. Much of Atomos reminds me of what a dancer might choose for a short audition piece. Legs are constantly flying up to brush ears and noses. The dancers move rapidly, squeezing incredible complexity into linked phrases, but allowing few pauses. I’m also reminded of run-on sentences with no punctuation. If there had been more commas, periods, and distinct paragraphs, I might have appreciated Atomos more. I kept wanting to freeze moments, to make the dancers stop so I could process an attractive phrase before another began.

Nevertheless, I have to praise the nine dancers, who were led by rehearsal director Odette Hughes. They are strong and beautiful and hold together well when pushed to extremes. Gender seems to make little difference. Male and female dancers alike attack. I could hear heavy breathing and loud footfalls, but the dancers, like the choreography, were impressively unstoppable.