Myth supplies the groundwork and inspiration for a lot of creativity, infusing itself into our cultures and minds. We have all heard how the Greek goddess Athena sprang fully-formed from the head of Zeus, but exactly how this came to be is less well known. Inspired by the myth and legend of Metis (wife of Zeus), choreographer Natascha Greenwalt, by putting together excerpts from previous works and the premiere of a new one, has given voice to this story. Not literally told, her cadre of dancers amazed me with their prowess as they moved through five sections or scenes that reflected this story in their mode and mood. 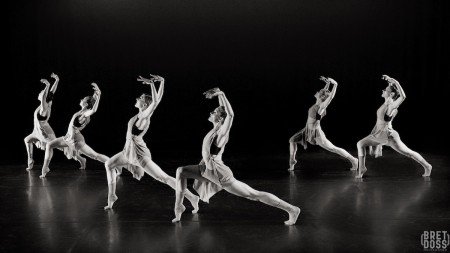 Transit of Metis began with fireflies (held by dancers in waving patterns) lighting up the stage as Christin Call and Thomas Phelan showed us the parting of ways in at this [ ] we part, followed by the group in Estranged Incandescence, a Funeral, the spirit of Tethered Apparitions, Transit, and then the finale of the new Athena Unfettered. Greenwalt tapped into the cast’s depth of ballet and modern dance technique, their acting abilities, and fused this into the artistry that makes dance art. The cast included: Danny Boulet; Sylvain Boulet; Call; Greenwalt; Katherine Murphy; Mariko Nagashima; Phelan; Lara Seefeldt; Hannah Simmons; and Marissa Quimby. 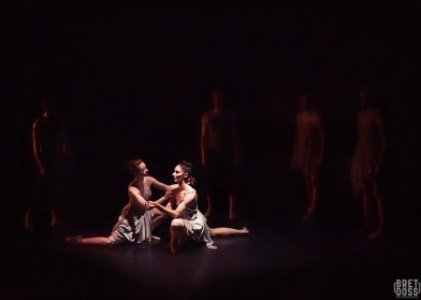 Both Estranged and Athena were accompanied by the excellent and powerful soprano Sarah Davis and Transit was set to an extended violin solo (Julia Gish-Salerno) with a score by Kevin Puts. Athena‘s music is an original composition by Avi Lasser and Garrett Overcash/Hevanti Productions. In terms of production values, my only fuss was that I found the lighting intensity levels to have been too low for most of the sections, unintentionally creating murk more than mood; the dancers were hard to see. It’s possible to create the feeling and moods desired without having to compromise clarity. 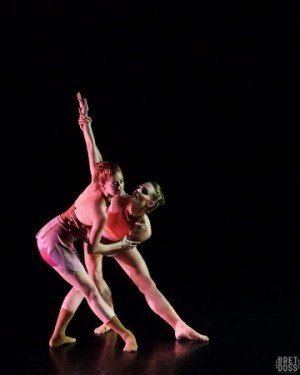 Greenwalt’s dance designs use motifs and builds on these, giving good structure to her dances. She effectively uses groupings and partnerings of small to larger units, such as duets, trios, and in a couple of cases, triple trios, plus of course, bringing the whole ensemble on stage to good effect.

Coriolis Dance (co-founded by Greenwalt and Call) offers some of the best of what contemporary dance, in my mind, should be — excellent production values including live music, full use of superb dancers and dancing, solid choreography and importantly, sincerity. They believe they have something of import to say through dance. This attracts and retains the best of the best and also attracts enthusiastic audiences who will want to see Greenwalt’s work again.

Christin Call: What is Home

Preview of Coriolis Dance’s “Transit of Metis”: What Becomes a Legend Most?