Over the past five years, we have seen examples of choreographers working in parallel with theatre directors to make outstanding works. Annabelle Lopez Ochoa and Nancy Meckler collaborated to create the award winning A Streetcar Named Desire. Then  Crystal Pite and Jonathan Young brought us another two award winners with Betroffenheit and The Statement. So  it was with great anticipation that I ventured to Sadler’s Wells for this latter duos latest, Revisor. The fact that I went back for a second viewing two nights later tells its own story.

Pite has described how  Revisor has links to Betroffenheit, a dark, traumatic personal  journey, ameliorated by “showtime” when the central character is on drugs  and deliriously happy show biz dance is  the order of the day. The dancers loved the “showtime” section so much that Young had to step in and say, “it’s enough now.” So, Pite and Young wondered about a new comic piece using similar moves and Young came up with an adaptation of Gogol’s “The Government Inspector”.  He wrote a fifty minute version of the play and his company recorded the text which we hear on-stage with the dancers mouthing the words. 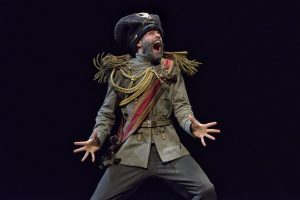 The first section had myself and many others laughing out loud as the Kidd Pivot dancers act out sharp, exaggerated movement expressing their fears that an inspector is coming incognito from Head Office. Doug Letheren as the Director moves with sinister power intimidating Jermaine Spivey’s hilariously troubled Postmaster. They are joined by a gaggle of authority figures each with their own deranged movement. We hear about a disturbance the previous evening and the co-conspirators mistake a lowly male clerk, the Revisor, sent to change the position of a comma in a document, for the Inspector. The Revisor and his assistant are in deep trouble with no money, their goods seized, locked in the worst room in the Complex. So, when the Director comes in with his mistaken view, The Revisor plays along, the Director believing that his true role is a clever cover. Feted and bribed by several of the senior staff, The Revisor and his assistant have a fine time with the latter inventing a story to keep the bigwigs on the wrong track. Moved to a room in the Director’s suite, the Revisor is visited by three of the establishment figures who want him to expose the Director, but leave them out of his report. 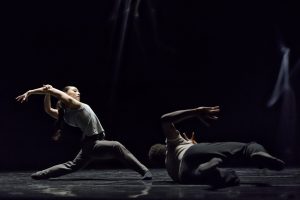 When the Minister for Culture, Religion etc tells him that she will illustrate the Director’s many crimes, the production changes gear. We see a deconstruction of the initial farce with the most enthralling dance from Ella Rothschild, Rena Narumi and the others, making extraordinary patterns with jagged movement. On my first visit I enjoyed the farce most, but the second time it was this contemporary dance section which excited me. Gogol was unhappy that his drama was always played as a farce and Pite’s dance section underpins deceit and corruption as malevolent factors and I was reminded of the activities of Trump and his cohorts. 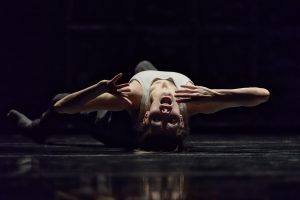 Pite returns to the farce for scenes with the Revisor penning a letter to the press with his findings, but then caught in flagrante with the Director’s wife, he exits fast, thrusting his letter into the hands of the Postmaster who reads it, as he always does, and shares his despair at the damaging contentswith the others. Jermaine Spivey’s solo is a whole body experience with rapid spins and jumps with arms and legs scything the air, leading to a final message to end the comedy – corruption is no joke. Pite is a notable collaborator and lighting designer Tom Vissar brilliantly illuminates the set for both phases and I particularly appreciated the fillagree light patterns on the back of the stage reacting to the spoken text. On my way out a leading dance producer told me, “ Crystal Pite’s a genius,” – it’s hard to disagree.