Have you celebrated Merce Cunningham yet this year? Had he lived a decade longer Cunningham would have turned 100 in 2019. In honor of the centennial of his birth, there’s an ongoing celebration around the world in tribute to this legendary American dance artist. The influence of Cunningham on contemporary dance today cannot be denied. He is among the most iconic figures in modern dance, and his choreography still captivates.

At Dance Place in Washington, DC, I was able to see a unique Cunningham program. First, John Scott Dance from Dublin, Ireland, presented three early Cunningham works: Totem Ancestor (1942), Solo from Second Hand (the solo was first performed in 1944, and later became the opening movement of a full company dance titled Second Hand, which premiered in 1970), and a duet, Night Wandering (1958). These works are deceptively simple and refreshing. Their beauty lies in the connection between movement and the human form. Cunningham allows the body to move glacially slowly. An arm will reach forward, a leg will extend backward, the torso will twist, then the head follows. It may not sound all that interesting, but it is. Coupling the movement with music that sometimes is as meandering as the dance seems makes it all the more intriguing and lovely. Adam Tendler on piano expertly added his magic to the three short pieces.

In Totem Ancestor, a brief solo, dancer Kevin Coquelard, with a hand on a hip forming a triangle at his side, turned ever so slowly and smoothly toward the piano at a back corner of the stage. He began moving on a diagonal from upstage left, opposite the piano. Like a frog, Coquelard propelled himself forward into a squat, dragging his toes underneath him before bouncing up again. The music by John Cage, also titled Totem Ancestor, achieves something similar to the dancing. There’s a shared curiosity and unhurriedness, a sense of simplicity and joyous surprise, and a sort of circularity, too. When the movement and music end, it feels less like an ending and more like a period at the end of a sentence, as if the choreography might easily continue on.

In the Solo from Second Hand, dancer Ashley Chen, to music by John Cage (the first movement of Cheap Imitation), exercised intense focus, but the work comes across as gentle and measured. Recognizable ballet vocabulary (deep pliés, relevé, arabesque) combines with distinctly modern elements (arms bent upward like goalposts, a hand hovering just above the head). There’s also much balancing and weight shifting. With the non-melodic quiet accompaniment that reminded me of rain, one can concentrate on the mechanics of the body as it moves through space, enjoying the shapes it forms. 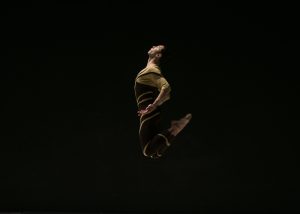 In Night Wandering, Coquelard and Julie Cunningham (probably not related to Merce, but a great name to share with him), wore costumes after the original Robert Rauschenberg design — a rather shapeless brown fur dress for her and a tighter-fitting, more colorful ensemble for him. The dancers kept the audience guessing about what would come next and why. Sometimes they faced each other, sometimes not. The choreography features angular leans, simultaneous squats, arms around waists, feet atop feet, even some leaps. It’s both awkward and intimate. And there are deliberate staccato notes (the music this time is not by John Cage, but Bo Nilsson). At one point Cunningham rode on Coquelard’s back like a cowgirl, and she later sat on him like a chair. To me, all of this was oddly fascinating.

After intermission came the DC MinEvent. A “MinEvent” is an unbroken sequence of excerpts taken from Cunningham works that form a one-of-a-kind new dance suited to the space in which it’s performed. The DC MinEvent was was staged by Jamie Scott (I believe no relation to Dublin’s John Scott, but again, it’s fun that they share the same last name) and Patricia Lent. This pair of stagers both grew up in the DC area and danced with the Merce Cunningham Dance Company. They took some talented young local dancers; drew material from Roaratorio (1983), Fabrications (1987), and Interscape (2000); used music by John King (100tone-candles); and pulled off a minor dance miracle. The result was a stunning and fairly seamless high caliber performance.

The diverse group of dancers (Malik Burnett, Nicole Daniell, Shonnita Johnson, Gabriel Mata, Jovick Pavajeau, Ashley Rivette, Robert Rubama, and Lindsey Scouten) executed crisply and looked well rehearsed. They wore plain solid colored dancewear and captured the look of a Cunningham dancer — not a blank stare but a semi-blissful, rather unreadable expression. If the music, which sounded a little like noise that would accompany a 1980s space-themed video game, happened to punctuate the dancing, it was a happy accident.

Here, the choreography picked up real speed. Dancers leapt, kicked, hopscotched, and sprung vertically into the air. When they were still, their balance was often put to the test. Upright on one leg, upper bodies twisted like weather vanes. While the early Cunningham works that opened the program had an elegant purity to them, the choreography culled for the MinEvent was not just faster in pace, but more complex and seemingly more physically challenging. This closing work appeared totally contemporary, and I found it utterly appealing. Thank goodness for Merce Cunningham, those who studied with him, and those who are able to learn his dances for the first time today.