The Grange is a venue that dance lovers need to add to their calendars. Buried in the Hampshire countryside, it is unusual among country house opera stages as it includes dance along with opera in its programming. Dance@TheGrange, directed by Wayne McGregor, brought together his company and Ballet Black to perform McGregor’s  Outlier, Cathy Marston’s The Suit and works by up-and-coming choreographers, Alice Topps and Mthuthuzeli November. 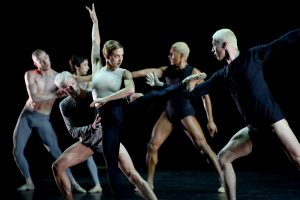 In Outlier, to Thomas Adès’s violin concerto Concentric Paths, the movement and music are complex and intricately structured, underpinned by design and choreography that show the Bauhaus inspiration in shapes clean-cut, distinctive and authentic. Duets complement and contradict, there is harmony and discord but never predictability and always invention. The dancers live in the instant, working with incredible speed and fluidity. Tetchy duets bring innovative partnering and brief ensemble sections lead to interestingly fractured trios, the friction drawing and holding attention. Alessandra Ferri, making a guest appearance contrasted with her quiet elegance. Watching her still superfine ballet technique in modern guise takes the work to another level of beauty in a duet of understated and unsentimental depth.  Both dance and music deliver an emotional impact that overrides the technical intricacy making this a wholly satisfying work. 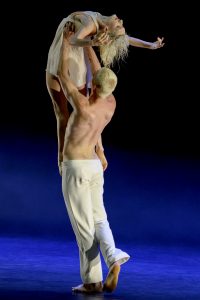 Alice Topps, a name well known in Australian ballet circles, was a welcome find by McGregor. Her body language has a clear and distinctive voice. Her two works, a duet, Clay and a trio, Little Atlas show a use of contact and partnering that avoids clichés to find surprisingly fresh pathways. Clay, danced by Rebecca Bassett-Graham and Izzac Carroll (see image to the right) expressed a loving relationship torn apart by suffering. The concept initiated a range of powerful emotion for Topps’ eloquent choreography while the dancers found the honesty to express them. It was a thrilling debut. 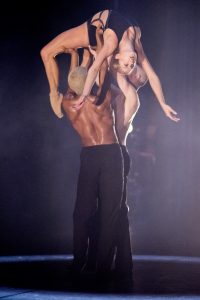 Little Atlas, part of a longer work played on memories and the scars, stories and fabrication left behind. The dancers, Camille Bracher, Jacob O’Connell and Jordan James Bridge formed the trinity of past, present and future (see image to the left) and while nothing was explicit there were moments that caught and held the imagination like a vice. The choreography at times athletic and virtuosic was never ostentatious, seeming as natural as flight and enhanced by Ludovico Einaudi’s haunting music. 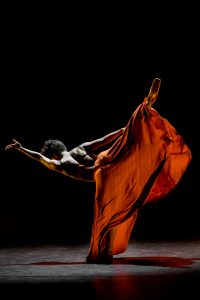 Washa, by Mthuthuzeli November, is the latest work from a very new choreographer. After proving his skill in the emotional punch of Ingoma, here he tackles abstraction. The work plays on the relationship between dance and music and sets shapes to rhythm. Ebony Thomas leads the opening, the frictive rubbing of his palms, duplicated in the score (by Peter Johnson) and seeming to light the fire. (Washa means ‘the burn from within’.) Strong rhythmic movement permeates the work and the beauty comes from the intricate play of arms and detail in the hands. Within this company, ballet is finding new roots as dancers move seamlessly from pointes to deep plie and from a classical jeté into an articulated roll in an exciting evolution of the form. 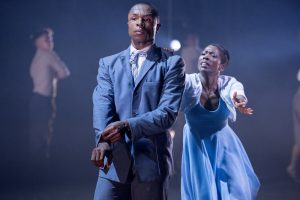 Ballet Black closed the programme with Cathy Marston’s award winning The Suit. Set in old Sophiatown, home to hot jazz in the 50s, Marston skilfully captures the essence of this psychologically disturbing story by Can Themba. The dancers become the set as they mime the domestic furnishing of wash basins and mirrors while the alarm clock, November’s furiously trembling hand, is slapped into silence by a sleepy José Alves. The characters are interestingly ambiguous. The erring wife, a magnificent performance from Cira Robinson, moves from kittenish charm to genuine regret and finally total despair. Alves, the wronged husband is the sort of man who helps old ladies across the road but wreaks terrible revenge on his wife. Nobody’s perfect and all are interestingly flawed. The company have the right blend of commitment and theatrical skill to make it a gem of narrative dance.

The estate has its own dramatic narrative. It was bought in 1662 and has seen much change. In the early nineteenth century it underwent massive restoration to become the first Greek Revival house in Europe in the form of a classical temple. In 1823 an Orangery was added which was adapted into the 600-seater opera house in 1998. The building under the guardianship of Historic England, was restored as a ‘roofed ruin’ and it is this arrested decay that gives its unique charm.

The opera house is a gem with comfortable seating and excellent sightlines. Michael Chance, a countertenor of international renown, is the artistic director and his vision is exciting, refreshing and, importantly, includes dance. His future programming plans promise, ‘a thrilling and somewhat daring leap into the unknown but done as well as we can possibly do it.’ Watch this space!