Since 1954, the Dance Magazine Awards have recognized outstanding contributors to the dance world. The awards are primarily bestowed upon meritorious performers and choreographers, but they’re also given to others who enhanced the presentation of dance. The tradition continued this year with the 2018 awards program at the Ailey Citigroup Theater on Monday. 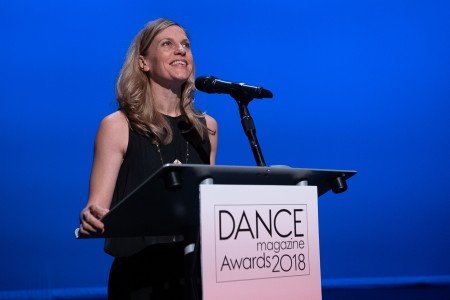 This year, in addition to four awardees, the breadth of the awards was increased with the addition of the inaugural Harkness Promise Awards recognizing new talent at the “upswing” of their careers, and the inaugural Harkness Leadership Award to acknowledge the contributions of those who have enabled dance to flourish.  This year’s award winners were Michael Trusnovec, Crystal Pite, Lourdes Lopez, and Ronald K. Brown; the Promise Awards recognized Aphrat “Bounce” Asherie and Raja Feather Kelly; and the Leadership Awardee was Nigel Redden. The award presentations were preceded by brief performances (or, in the case of the Promise Awards, filmed synopses) that evidenced some aspect of their careers, and by speakers who introduced the awardees and summarized their achievements.

Since the awardees and presenters were announced in advance, there were no surprises in the program. As a general theme, the emphasis on inclusion in the dance world permeated the evening, from the opening remarks by American Ballet Theatre principal dancer Misty Copeland through nearly all of the spoken presentations, acknowledging and encouraging the changes in perception and opportunity that have occurred in recent years.

It would be inappropriate to “review” the program, so except for a few adjectives here and there (or maybe a bit more), the following is limited to reporting that summarizes the evening. Quotations may not be exact, but they reflect the words I captured. 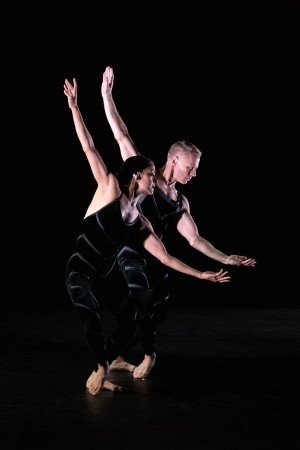 Copeland’s brief address referenced the love of dance that she’s had since she was a young girl, evidenced by her subscribing to Dance Magazine – never dreaming that she would one day grace its cover. She continued by emphasizing that the awardees exemplify those in the dance world who speak to change, and that “we all have a responsibility to move the art form forward.” Following additional remarks by Wendy Perron, Dance Magazine’s Editor at Large, the presentations began with the first performance, an excerpted duet from Paul Taylor’s masterpiece, Promethean Fire, danced by Parisa Khobdeh and the first of the evening’s honorees, Michael Trusnovec.  As brilliant, shattering, and ultimately uplifting a dance as Promethean Fire is, and exquisite as that duet is, I’ve never seen it danced better.

I recently described Trusnovec, who is retiring in June, 2019 after more than 20 years with the Paul Taylor Dance Company, as one of the most powerful dance presences anywhere. That power seemed to evaporate as he accepted his award. Following a compelling introduction by Patrick Corbin who informed that the honoree, his student, colleague, and friend, “changed my life in a profound way” (and described him as “living, breathing, gold”), Trusnovec exuded joyous humility, saying that “I never feel more alive when I’m dancing,” and thanking, in addition to friends and family, the late Paul Taylor “for allowing me into his genius world.”

An excerpt from The Other You, first performed by Pite’s company Kidd Pivot in 2010, preceded the presentation to Pite. Here the excerpt was danced by Andrew Murdock and Michael Gross of Hubbard Street Dance Chicago. I’ve not previously seen the full piece, but the male duet performed here was extraordinarily intricate, powerful, and moving. Whether the two characters are supposed to represent separate individuals or two sides of one person (onstage, the dancers looked like identical twins) might be more clear in the piece as a whole, but here it didn’t really matter: the impact was the same either way. The choreography provided a glimpse of Pite at her choreographic best. 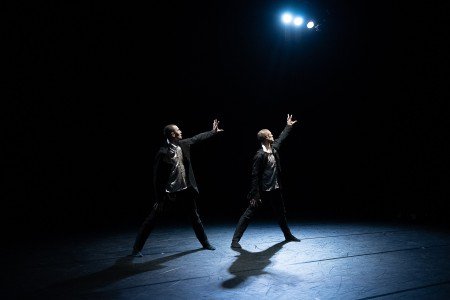 In his introduction, Sean Curran, Chair of the Dance Department at NYU’s Tisch School of the Arts, described Pite’s choreography quite accurately as “dynamic and strange, a mixture of dark and light that digs into our body of hopes and fears” and Pite herself as an educator and mentor with an ability to challenge and nurture, who is extraordinarily generous and who will have a lasting impact. Pite spoke about being motivated as a young girl by her mother’s response to seeing a performance by Alvin Ailey American Dance Theater in the late 1970 – she spent hours following the performance of Revelations trying to replicate Judith Jamison. Pite said that the ability to create that kind of  impact was what made her want to be a choreographer: “to witness how the body can give shape to the soul,” and to catch “a glimpse of the divine.” 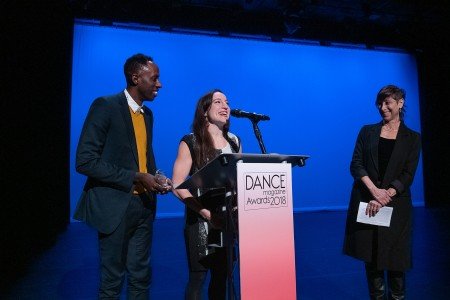 Joan Finkelstein, Executive Director of the Harkness Foundation, then presented the Promise Awards to Asherie (whom I recall well from her appearances with Dorrance Dance) and Feather for their boundary-pushing choreography. [The presentation included filmed excerpts of their work which, unfortunately, consisted only of spliced images and video snippets.] The award provides rehearsal space rent free and apparently unlimited time to explore their creative impulses, with no requirement that either of them produce “a product.”  In their brief acceptance (delivered by the awardees in alternating sentences), they promised “we won’t let you down; we promise.” 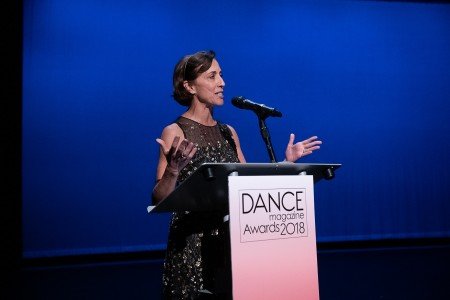 The award to Lopez was preceded by a performance of an excerpt from George Balanchine’s A Midsummer Night’s Dream (the Titania and Oberon pas de deux) danced with both purity and reverence by Miami City Ballet principal dancers Tricia Albertson and Renan Cerdeiro, and by an introduction by Darren Walker, President of the Ford Foundation (who described Lopez as carrying herself in real life as she did as a dancer: with grace, character, and integrity) – which succeeded in marrying three elements of Lopez’s career (to date): her performing years with New York City Ballet, as Artistic Director of Miami City Ballet, and as a member of the Ford Foundation.

In her acceptance, Lopez acknowledged how thrilling it was to be accepted by her artistic community. She described dance, with one common language of movement to music, as ever-lasting and all-inclusive, evidenced by her own achievements as the daughter of Cuban immigrants: a full scholarship to the School of American Ballet in 1969, the first Latina principal dancer with NYCB, and the first Latina artistic director of a major ballet company. Lopez concluded her comments by thanking dance: “the most magical of the arts. It changes lives, and those lives will change the world.” 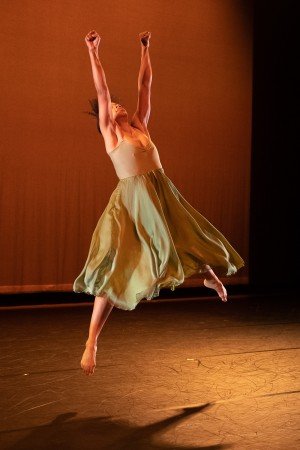 Annique Roberts appearing at
the Dance Magazine Awards
in Ronald K. Brown’s “She Is Here”
Photo by Christopher Duggan

Brown’s award was preceded by an excerpt from She is Here (2016), a solo danced exquisitely by Annique Roberts of Brown’s Evidence: A Dance Company. This solo was not unlike other examples of Brown’s choreography that I’ve seen, but the choreography and Roberts’s performance of it illuminated the choreography in ways I’d not seen in other contexts. There’s Brown’s slinky, liquid style of movement, but there’s also the repeated extensions of arms outward, which I saw for the first time as expressing joy and celebration rather than random exclamations. Sure enough, in introducing Brown, his longtime friend and colleague (and Associate Director and Dancer in Brown’s company) Arcell Cabuag emphasized not only Brown’s unique “manipulation of space,” but also the choreographer’s inclination to show dancers “pointing up – as if having a conversation with God.” His dances, Cabuag said, are about God and Love – which are the same thing. 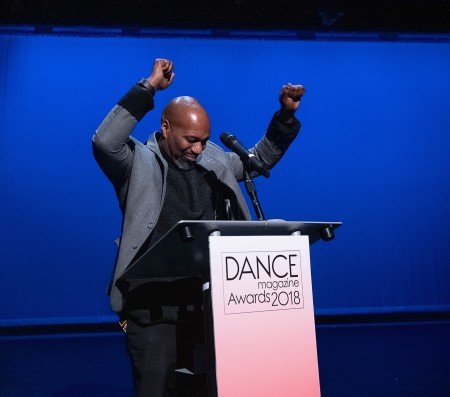 Brown’s ebullient acceptance stressed how “blown away” he was that he was there accepting this award, especially since his career started as a journalist and he had limited experience as a dancer. But he described his continuing interest in dance since he was a child, and deciding at age 18 that “we need to start a legacy” by founded his own company. 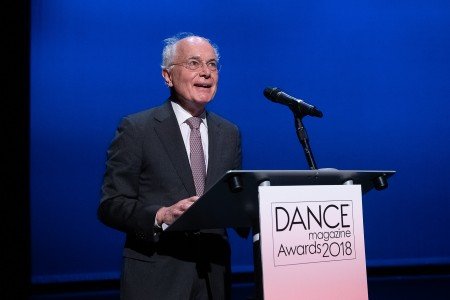 The evening’s final award, the new Leadership Award, was introduced by an excerpt from Stone-Stepping, performed by three members of Gallim Dance. The excerpt is an intimate duet for two women, until one male dancer appears from out-of-sight (at least to me) downstage, separates one woman from the other and rolls her across stage into the wings, leaving the remaining woman in what appeared to be despair.

In his acceptance (following introductions by Jennifer Stahl, Dance Magazine’s Editor in Chief, and Frederic M. Seegal, CEO of Dance Media (who described the awardee as an “impresario”), Redden emphasized his connection with Gallim as exemplifying his approach to unfamiliar dance. At first, he said, he didn’t get it, but after repeated exposures, he had an epiphany – everything made sense, and he became excited by what he saw (perhaps the same will eventually happen with me). Redden, who, among other things, served as Executive Director of the Lincoln Center Festival from  1998-2017), and, since 1995, has directed the Spoleto Festival USA in Charleston, S.C., observed the continuing dialogue between American dance and dance around the world, and emphasized that all dance shared a common language of movement.

The awardees and attendees then adjourned to a post-award after-party.

For me, the evening’s greatest significance occurred before the festivities formally began. As attendees entered the theater, images were projected on a stage screen of dancers, and people connected with dance, for at least the past 60 years – Balanchine to Baryshnikov to Barnes (Clive) – all prior winners of Dance Magazine awards. These images were at the same time a moving panoply of icons of recent American dance history, and an encapsulation of the excellence that Dance Magazine awards recognize. The 2018 awardees are in excellent company.