Alter the ingredients in your salad and the flavour changes, so it is with Dance Salad Festival. This year’s mix of European and US companies gave a community feel; the warmth of fellow artists sweating together in class was matched by the collective warmth in the ensembles on stage. There were old favourites and first-timers while Sidi Larbi Cherkaoui’s Fall, was a mix: a favourite choreographer on a new path. 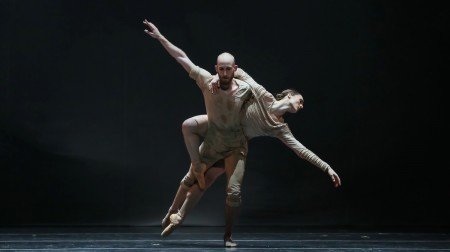 The appointment of Cherkaoui as director of the Royal Ballet of Flanders caused a stir in the dance world. A contemporary man in a ballet world, his openness to dance culture in its broadest sense is taking him in new directions and attracting interesting dancers from across Europe. Fall, a curation for DSF, takes as its starting point a philosophical view of fear and falling, sensations not unknown to dancers. He explores the experience of his dancers, those who tumble regularly and those who expect to stay on balance. It made an interesting fusion and a foresight of what we might expect in the future.

Drew Jacoby, a pedigree hybrid if ever there was one, has joined Flanders from NDT and in her duet with Matt Foley, previously in GöteborgsOperans Danskompani, she cut a magnificent figure of steel and grace as together, they swim uncharted waters. It was also fascinating to see Kozuki Kazutomi and Wim Vanlessen, dancers of such different cultural heritage, working together in harmony.

The company also presented Cherkaoui’s Faun with Houston dancer, Virginia Hendricksen and Yevgeniy Kolesnyk in the coveted roles. This Faun is half animal and half man and although Kolesnyk struggled with the natural movement of the opening solo, once the pair meet up the strength of the rapport between them is gripping. There is less of the naïve playfulness of the original cast, but in their more vigorous and defined delivery, the sexual tensions remain making this a valid interpretation. 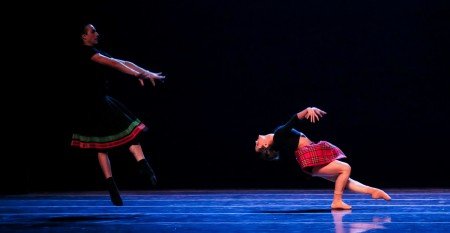 If you like your dance sharp to the point of brilliance and as mad as a Monty Python sketch, then Marguerite Donlon’s Made in Love is your ballet. She created the piece with the dancers of Staatstheater am Gärtnerplatz as part of the company’s Minutemade project – where choreographers have one bare week to create a piece. This must be a terrifying prospect for both dancers and choreographers but it has given birth to a dance work full of the freshness of a spring morning and bursting with champagne bubbles.

Donlon reveals her Irish roots in the traditional tunes and fleet footwork. Javier Ubell, a hyperactive leprechaun in gold doublet, was matched by Roberta Pisu’s balletic batterie while Rita Baro Soares broke the speed limit with her razor sharp feet. Davide D. Giovanni dressed only in red skirt gyrated his liquid torso in a manner that stirred visions of a Caribbean calypso. Russell Lepley sprouted Shakespeare that sadly fell on deaf ears while shirty Ariella Casu in tartan skirt played it straight and tough amid the mayhem. It was pure heaven and over far too soon.

The dancers also presented Jacopo Godani’s Versus Standard to a fierce score by 48nord (Siegfried Rössert and Ulrich Müller). Like competing teams the dancers confront each other both physically and psychologically. The concept works effectively as dancers initially posture with staccato aggression then plunge into the fray before finally deciding to join forces. 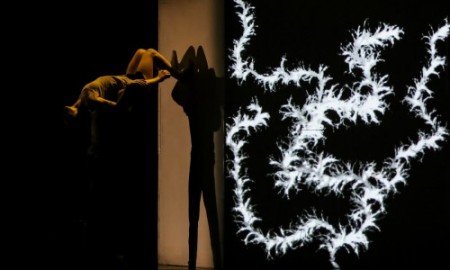 Spellbound Contemporary Ballet based in Rome made a welcome return with The Four Seasons featuring nine dancers, a cottage and music by Vivaldi with additions from Luca Salvadori. Choreographer and director, Mauro Astolfi has a signature style and his dancers, barefoot and technically skilled, fly and spin with virtuosic ease. A simple house is their only prop, creating a surface for Enzo Aronica’s video projections which make an imaginative partner to the dance. The seasons follow in natural order culminating in winter but for me, Autumn, with awesome graphics and matched by dance delivered with style and passion, won the day.

In cosy Europe where we still enjoy state subsidies we look with sympathy at US companies who often need long seasons of The Nutcracker to survive. Then you hear of NW Dance Project in Portland, Oregon and preconceptions crumble. Founded by Sarah Slipper they have 180 new creations to their credit in the 12 years of their existence. Their offering was Yidam by London-born Ihsan Rustem, their newly appointed resident choreographer. This was a pared-down work, structured and paced with an artist’s eye. The choreography gives an original edge to a very physical contemporary 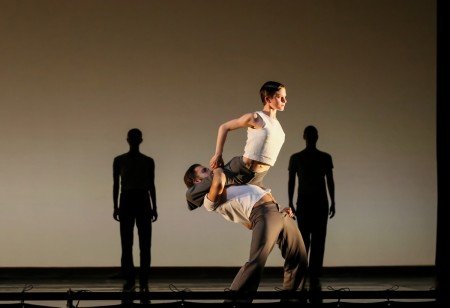 style that brings the whole body into play. The minimal design made ingenious use of regular stage furniture. A strip of front curtain, dissecting the stage horizontally, carved original shapes out of the conventional proc arch while a strip of the floor cloth hoisted up by a pulley, creates a sculptural element and inspirational lighting. The eight dancers gave their all in a constantly engaging work with tiny Ching Ching Wong punching well above her weight both in her solo and in the duet with Victor Usov.

BalletX from Philadelphia showed sections of Nicolo Fonte’s work, Beasts. The three sections were densely packed with narrative ideas and difficult to decipher despite the strong dancing and commitment of the dancers. Most successful was the Black Swan section. Richard Villaverde made a powerful impression in his opening solo. Dressed only in black tutu skirt, his expressive body portrayed a tormented creature with commanding physicality. The development – the appearance of a white swan on pointe and two princes – was ambiguous, but Villaverde’s presence continued to hold the audience.

Two pas de deux completed the line-up. Luis Martin Oya’s folkloric Por Ti, was given a gentle interpretation by Sonia Rodriquez and Piotr Stanczyk from the National Ballet of Canada but I wished they had brought something more cutting edge, in keeping with the ethos of the Festival. And then there was Christian Spuck’s inimitable Le Grand Pas de Deux. This level of silliness needs the highest level of professionalism and got it from Alicia Amatriain and Jason Reilly. Amatriain has probably the sharpest sense of comedy on the dance scene, her myopic sweetness masking a killer ballerina instinct. Reilly is the perfect foil, desperate to sneak in a double tour but programmed to support his partner. The ballet jokes come thick and fast in a work that always scores.

Director of Dance Salad, Nancy Henderek, spends the year scouting for new works. No two Festivals are ever the same. This year had fewer star names but compensated with larger groups of top quality dancers. The overall level of skill and commitment was remarkable and the audience warmed to the feast of dance. The feel good factor, difficult to define but impossible not to enjoy, was there is abundance.