Dance Salad Festival 2017 was a dish of distinct flavours hailing from East and West and bringing voices from the street to meet classical dance in a particularly piquant mix. 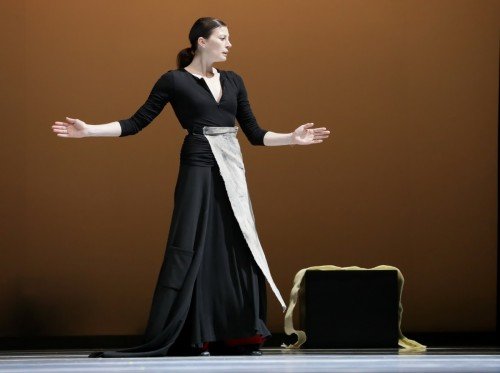 Closing the first night were Cherkaoui’s Fractus V and Carlson’s Black over Red (my dialogue with Rothko). Paris Opéra Étoile, Marie-Agnès Gillot, accompanied by cellist and composer, Jean-Paul Dessy, interpreted the mystic dialogue with painter Mark Rothko. Dressed in severe black, an extraordinary dress that morphs into unique shapes, she draws us into a work as dark and deep as Rothko’s late paintings. Carlson has an astute eye for shape and colour and the props, bright coloured rubber gloves, brushes, scrolls and a table all help recreate Rothko’s physical world while Gillot, an artist who commands the Olympian heights of dance, recreates the soul of the artist in a performance of minimal dance and maximum expression.

Each evening closed on Fractus V, created by Cherkaoui and curated for the Festival. True to Eastman multiculturalism, the dancers come from across Europe while the musicians draw world music into a single entity. Playing instruments as diverse as dijuridoo, geomungo and Celtic harp with vocal contribution from all, the soundscape was awe inspiring. 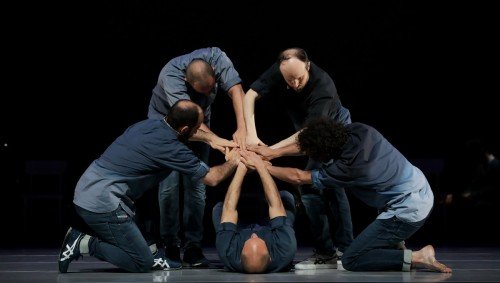 The five dancers, dressed in blue denim, look for all the world like your local handyman but once they start to move there is the inherent agility of big cats in their liquid limbs. Woven into this unpretentious dance world is Noam Chomsky’s discourse on a world bombarded with propaganda. Limbs and hands weave intricate kaleidoscopic patterns unravelling the codes of deceit in their search for clarity. It’s a long work but, veering between serious intention and high comedy, the invention never flags. In a separate extract, Flamenco, a high intensity dialogue between Cherkaoui and Fabien Thomé, added extra value.

Also on a serious theme, Brooklyn company, Evidence, presented a section of Robert K. Brown’s LESSONS: March. Set to the still-relevant text of Martin Luther King, it was given a heart-felt performance by Annique Roberts and Clarice Young.

Carlos Acosta has a special relationship with Houston. Ben Stevenson, then director of Houston Ballet brought him to the USA, and DSF now presents him as choreographer. From Stevenson’s Texas Ballet Theatre, Leticia Oliveira and Carl Coomer danced a duet from Acosta’s Carmen premièred at the Royal Opera House in London in 2015. A teasing, playful duet between Carmen and Don José showed Acosta’s ingrained theatrical nous, plus his expertise in the art of pas de deux. 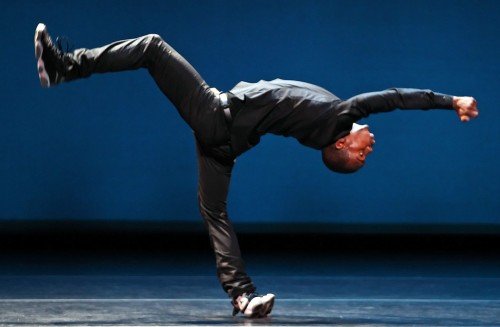 Lil Buck in “The Swan”
Photo: Andrea Mohin for The New York Times

A very different and unusual partnership was seen in Blooming, choreographed by two superb performers, Shantala Shivalingappa and Charles ‘Lil’ Buck’ Riley. Coming from distinct dance cultures, classical Indian and street jookin’, they exchange unique moves in a high-spirited battle of wits. They also had their own solo spots. Shivalingappa, a performer of infinite charm, opened the programme with Ganapati Vandana, a welcome to Ganesha, the elephant headed god. Kuchipudi is a less well-known style of Indian dance, featuring the familiar deft footwork and detailed hand gestures and surprisingly effervescent bursts of movement.

Since its creation in an impromptu moment, Lil’ Buck’s The Swan has gone viral on YouTube and seeing it live drew whoops from the audience. His shoulders ripple like water in the wind and his bourrèes, achieved with fluid ankle moves, are pure ballerina quality. It’s a winner. 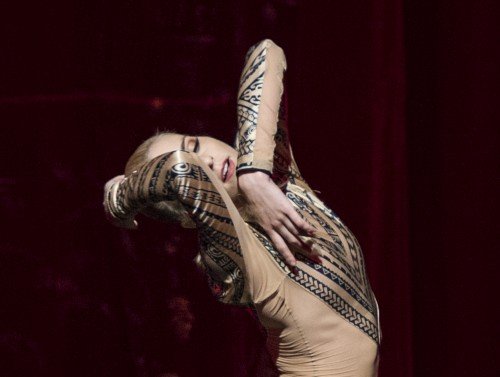 Daniel Proietto, who brought his Cygne to DSF in 2014, now brings Player, a sleek and stylish solo for Whitney Jensen, danced to a commissioned score from Mikael Karlsson. It’s a tour de force for Jensen who runs a gamut of moods. She shows quirky, doll-like nonchalance in the opening front cloth sequence before the curtain rises, exposing an empty stage backed by an extremely clever digital display of Jensen multiplied to Busby Berkley quantities. The pattern on her costume is repeated on the backdrop and, driven by Karlsson’s score and her own fierce energy, she delivers a dynamic display of skill before a reflective close finishing, like Degas’s little dancer, standing reflectively in fourth position. 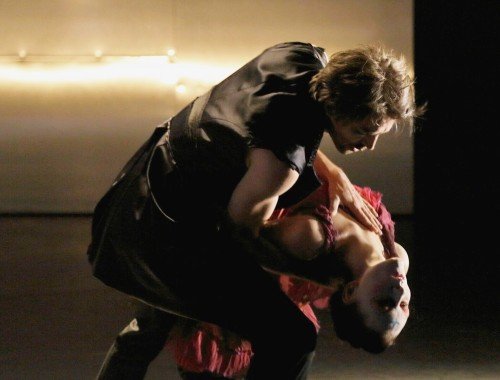 Susanna Leinonen Company based in Helsinki, brought two works. Leinonen uses her trademark visuals in Touch of Gravity with images of weightlessness before the six dancers take the stage in an effectively structured work given a punchy presentation. Her main work, Romeo & Juliet, suffered in curation as the extracts didn’t tie up. However, the video interlude is dramatic and eye-catching and the dance thrilling. Leinonen’s style of contemporary is physical, fluid and very powerful, particularly evident in the performances from Jouka Valkama as Romeo and Atte Kilpinen as Mercutio. Tiia Huuskonen, Juliet, dressed in a mix of everyday and fantasy, takes the central role and in a formidable performance she captures this contradiction.

Chinatsu Kosakatani and Yutaka Nakata from the Carolyn Carlson Company completed the programme with Li. A duet, to music by Aleksi Aubrey-Carlson, it has a still centre that focused the energy in a tight vortex. Carlson’s choreography plays on the duality of yin and yang as the dancers, both equally powerful and strong, combine their differences in harmonious contrasts. The pace and dynamics are tightly reigned making the breakout moments bristle with intensity in an immensely satisfying work.

This may be a Dance Salad but with ingredients of such substance, each evening is a meal in itself, leaving dance appetites happily assuaged.