Dance Salad Festival celebrated their 25th season this Easter. Mayor, Sylvester Turner, proclaimed April 11, ‘Dance Salad Day’ in Houston, acknowledging the value of this three-day season of new and innovative dance on the cultural scene. It was a well-deserved accolade for festival director, Nancy Henderek, whose tireless work ensures its continued success despite a Covid hiatus of two years.

This year’s offering was more a feast than a salad: two substantial mains, Hofesh Shechter’s Grande Finale, and Dunia Dance Theatre’s Making Men, were accompanied by a trio of contrasted works from Kammerballetten in Copenhagen, duets from France and Germany and, from Antwerp, a solo choreographed by Drew Jacoby.

The curated version of Grande Finale tightens the work to an effective length. It’s a powerful and chilling piece of theatre. In the bleak emptiness, shafts of light catch limbs and gormless faces as corpselike bodies become unwilling dance partners. The frenzied dance that erupts on waves of booming sound seems to come from a place of despair rather than joy and the itinerant band of musicians that follow the action brings no solace.

It takes the sweetness of Franz Lehár’s Merry Widow waltz to really rub salt into the wounds. The ragged ensemble in a mood of hysterical joy, toss a female dancer in the air in ecstatic glee but the end is a pile of corpses with the last two men standing giving a salute that can only be seen as ironic. 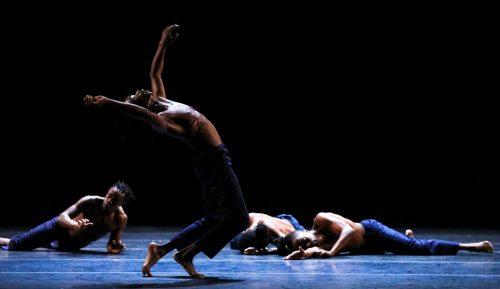 Dunia Dance Theatre, (Belgium/ Zimbabwe) takes the long view. Africa, the continent of our human origins, has never lost contact with dance and Making Men, is the beating heart of the evening’s performance. Sierra Leonean choreographer, Harold George, mixes music, Baroque and African, and mediums, film and stage, to arrive at a point where, while remaining distinctly African, the work has universal significance. The film incorporates personal reflections as George states that he chose dance because it was the least masculine art form before dazzling us with a display of male prowess and beauty.

Filmmaker, Antoine Panier’s camera is like a fifth dancer, moving in step, up close and very personal. The haze of dust in the firelight catches the rawness of initiation, the camera cuts to first intimacy, the lens so close, you can see the pores of the skin and feel the heat and desire. Then, in an astonishing moment of epiphany, the setting moves to the savannah grasslands as the four men cut heroic figures against the wide sky accompanied by Vivaldi’s Nisi Dominus.

There is a seamless switch to live dance as Peter Lenso and Carlton Zhanelo, who appear in the film, are joined by Llewellyn Tebogo Mnguni and Glendale Mudzimu. The choreography, an athletic fusion of African and contemporary dance, shifts between traditional moves and a more urban space. A strong, emotional current runs through the work as the quartet, all powerful performers, explore rejection and unity. 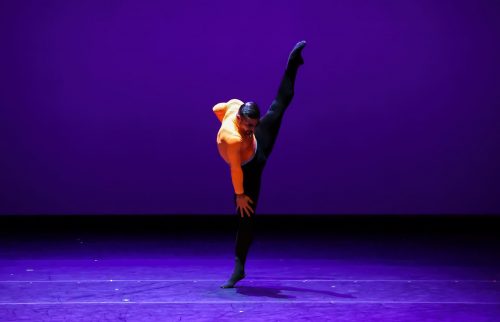 The only solo on the programme was Jack, performed by Daniel Domenech and choreographed by Drew Jacoby, well known to Dance Salad audiences as a dancer. The shortness of the work, around five minutes, was contrasted by the power of its impact. Every detail is considered and nailed. The luminous colours locate the modernity as the eyewatering purple, pink and orange in the lighting are replicated in Domenech’s top that fitted like a second skin. The sound score, a heavily modified Prelude from Gershwin, was scratched and distressed almost beyond recognition but like the choreography it bristled with electricity and constantly caught the viewer off guard. Jacoby’s choreographic language has logic in its quirkiness and syntax that operates in a totally compelling manner. 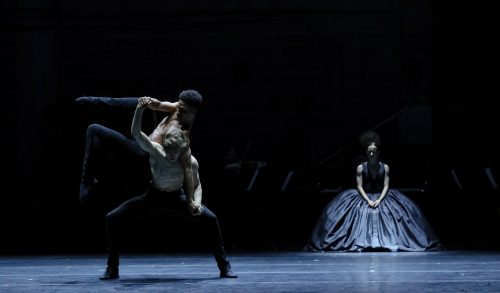 Paul Lightfoot, also no newcomer to Houston, choreographed Selfportrait for Danish group, Kammerballetten. It is richly layered with nuance and theatrical detail, often too subtle to catch at first viewing but lending an air of gravitas that balances the contrariness which defines his work. Diminutive Maria Kochetkova, in a voluminous shirt and corset, is a charismatic figure who bookends the work, as curtain rise and fall at a touch of her authoritative hand. Playing on the idea of distance and connection, Kochetkova climbs out of her skirt to dance with Sebastian Haynes, a dancer of elegance and clarity and the more volatile Toon Lobach. The mix of fine dance and deep thought is accompanied by pianist and composer, Alexander McKenzie with Niklas Walentin and Jonathan Swensen, in a totally captivating work. 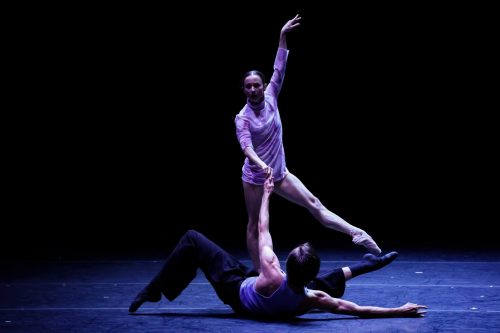 Sebastian Kloborg with Maria Kochetkova in Once I had a Love
Image: Amitava Sarkar

Kammerballetten also presented, Once I had a Love, choreographed and danced by Sebastian Kloborg with Kochetkova. Forget romance, this is twenty-first century love: fractious and demanding as the choreography switched back and forth between give and take. Emotions are carefully concealed, but occasionally burst through the cynical veneer in an ecstatic high-flying lift. The duet ends ambiguously with the door left open.

Oenothera, a gentle neo-classical work bucked the trend of innovative dance. Choreographed by Tobias Praetorius to Schubert’s Nocturne D.897, it matched instrument to dancer with skill and sensitivity. The trio of musicians were complemented by dancers, Astrid Grarup Elbo, Rikako Shibamoto and Ji Min Hong in a breathing space of quality classicism.

Semperoper Ballett from Dresden offered the Autumn pas de deux from David Dawson’s Four Seasons. Zarina Stahnke and Alejandro Martinez, both dancers steeped in Dawson’s high-tension technique, revelled in Max Richter’s exuberant music. The bustle and wild winds of autumn are reflected in the high speed and extravagant arms, and Stahnke, the spirit of dance inherent in her body, is the perfect exponent. The final exit, as Martinez’ slowly arches his back and uncurls, seems to prepare the body for winter sleep. 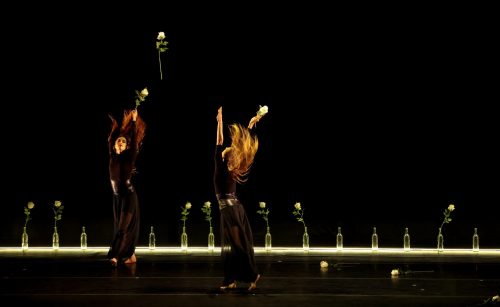 Anna, danced by choreographer Laura Arend with Fanny Sage, delivers a simple yet powerful message told by the two women in a rectangle of neon backed by a line of white roses. The movement is passionate as bodies with flexible spines and lithe limbs ripple over the stage. They share rhythms then come together standing one behind the other linking outstretched arms: one body, two souls. The message consolidates with the strains, in German, of the iconic Pete Seeger anthem, ‘Where have all the flowers gone’, a powerful and timely statement.

Dance Salad Festival 2022 delivered some important messages but also beautiful dancers and exhilarating, vibrant dance. The joy of seeing this assembly of international talent back on stage was a real boost to the spirits and we’re already looking forward to next year!