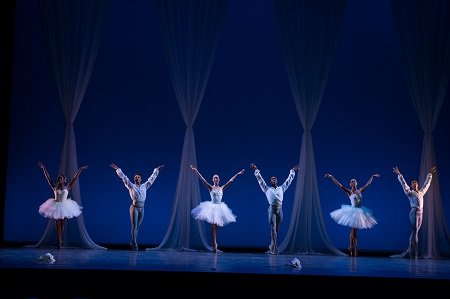 Change doesn’t, and didn’t, happen overnight. Before there was social media, before there were computers, and before public relations became as targeted and sophisticated as it is today, there were black ballerinas. In the final performance of its Spring 2016 season at City Center, Dance Theatre of Harlem recognized this history of accomplishment by honoring a stage full of African-American ballerinas who paved the way for those achieving success today.

This tribute was in addition to DTH’s program, which featured four dances: Divertimento, created by Elena Kunikova; Helen Pickett’s When Love; Change, by Dianne McIntyre; and Nacho Duato’s Coming Together, which had its DTH premiere the previous night.

The ‘Black Ballerina Tribute’ consisted of Artistic Director Virginia Johnson and Ballet Master Kellye A. Saunders giving a general introduction (with Johnson stating that she used the word ‘ballerina’ loosely), and the curtain opening to some 40-50 dancers in lines of five or six dancers each. Johnson and Saunders alternatively identified the women in each line, they left the stage, and another line moved up.

Nearly every name was drowned out by the audience’s hoots and cheers, and there were few I could discern – but it was much more important, and more impressive, that the audience knew them on sight despite the passage of time. (One I recognized was Debra Austin, who danced with New York City Ballet and the Pennsylvania Ballet, and whose performances I remember well). Receiving two of the strongest audience responses were Raven Wilkinson, who danced with the Ballet Russe de Monte Carlo, and who is acknowledged to have ‘broken the color barrier’ for black ballerinas; and dancer, actress, and choreographer Carmen de Lavallade, who danced with the Metropolitan Opera Ballet and also appeared with Alvin Ailey American Dance Theater and American Ballet Theatre. Most of the remaining dancers were DTH alumnae; listing them all would be prohibitive, but each (including of course, Johnson – whose performance in DTH’s Giselle (also called Creole Giselle) I remember vividly – and Saunders) fit the definition of ‘ballerina’, loosely or otherwise.

Regrettably, the four pieces on the program didn’t match the distinction of those dancers honored, despite fine performances by DTH’s current artists. Although all had varying degrees of merit, the opening piece, Divertimento, was the most successful. Choreographed specifically for DTH (it premiered two months ago), Divertimento is intended to showcase, in a sugar-coated way, the company’s facility dancing classical ballet, and to entertain the audience in the process. Ultimately it succeeds on both levels. 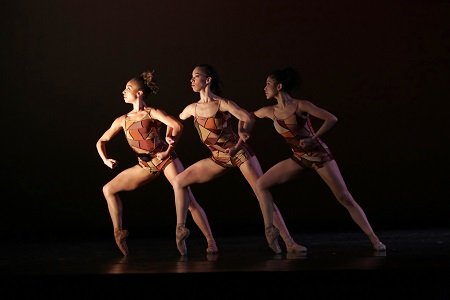 Kunikova divides the cast’s three pairs of dancers into stereotypical ballet ‘types’ – the ‘ingenue’, the ‘sylph’, and the ‘aristocrat’ although these types apply more to the women than the men, and the stylistic differences between them were often muddy. The first part of the ballet, choreographed to Mikhail Glinka’s 1832 Divertimento Brillante, a chamber piece composed to arias from Bellini’s opera La Sonnambula, has the three couples sharing the stage, and in the context of demonstrating classical ballet movement, developing their characters. The beginning comes across as overly academic, but as it weaves Romantic and Classical ballet allusions into the choreography, it increases in power and complexity (and, judging by the reaction, in audience interest). Kunikova then brings it together with a campy ‘love conquers all’ ending.

The three couples were danced by Ingrid Silva and Dylan Santos, Chrystyn Fentroy and Da’Von Doane, and Lindsey Croop and Francis Lawrence. All handled the classical ballet details with both aplomb and, where appropriate, understated humor. The ballet seemed to focus more on the second pair, and with her delicate and ethereal air, Fentroy was the model of the Romantic ballerina – but her innate elegance captured the essence of Classical nobility as well. In truth, she could have ably represented either stereotype. Her partner, Doane, always stalwart and reliably competent, carried the laboring oar for the men, and acquitted himself well. But Santos and Lawrence did particularly excellent work in their solos, both demonstrating superior elevation in their leaps and overall attack.

A pas de deux that Pickett choreographed in 2010 as part of “Harlem Dance Works 2.0,” and which formally premiered in 2012, When Love is lovely to watch even though the choreography is not particularly complex. Stephanie Rae Williams and Doane did a wonderful job, both in their execution of the steps and by their acting proficiency (and Williams is a delightful presence), so that the ballet, in terms of what one sees on stage, was thoroughly enjoyable. It whet my appetite for a DTH small-scale (in terms of number of dancers) version of Romeo and Juliet.

But When Love was considerably less successful than it might have been. Pickett choreographed it to excerpts from Philip Glass’s opera Einstein on the Beach, ‘Knee 5’ of which is the accompaniment for most, if not all, of the piece. One problem – and it’s one I have with many dances that are choreographed to spoken lyrics – is that the lyrics often detract from the dance. Here, the mellifluous delivery of the words of ‘Knee 5’ (the speaker is not identified) made the choreography appear too literal.

Far more problematic were words I was unable to decipher that I began to hear soon after the duet began. At first, a tinny, monotonic male voice could be heard – but it was so indistinct that I (and others in the audience) thought someone had forgotten to turn off a cell phone. After what seemed a very long time, I heard from the opposite side of the orchestra the sound of woman – soft, but equally incomprehensible. Only at that point did it become obvious that this was part of the dance’s accompaniment, presumably reflecting the ‘thoughts’ that ran through the characters’ minds. That these words might have had some purpose, however, is far outweighed by their annoyance; and the struggle to tune them out, and then try to understand them, seriously interfered with the ability to appreciate the dance.

Following the tribute, the program continued with Change, which, like Divertimento, premiered two months ago. To ‘traditional’ African and African-American music performed by the Spelman College Glee Club, the program notes indicate that the piece was inspired by women of color “who have refashioned their neighborhood, the country, the world through their vision, courage, and endurance” and that they “could be called warriors for change.” And that’s the essence of the problem with it – it’s less of a dance than a war cry.

Divided into four segments (Ceremony, Lay It Down, Action, and Resolve), the dancers appear angry – there are simulated karate chops and guttural shouts – and determined, but not much more.

The evening concluded with Duato’s 1991 piece, Coming Together, which DTH premiered last year. Though it’s filled with energy and the six women and six men handle the non-stop action and athleticism very well, it’s not one of Duato’s best efforts.

The 1971 score of the same name by Frederic Rzewski to which Duato choreographed the piece was inspired by the uprising at Attica Correctional Facility in New York earlier that year, and it utilizes an overlay of eight sentences, continually repeated, from a letter written in May, 1970 by Sam Melville, an inmate who was killed in the riots. The didactic music has a solid percussive rhythm of varying intensity throughout. But as with When Love, the words were something of an annoyance, and except for a phrase here and there, the music drowned them out. (I did catch two words said multiple times: “…incessant noise…”; words that made perfect sense in context.)

The piece is intensely energetic, and requires considerable stamina, as well as dancing ability, to get through. As it begins, a triangular shaped ‘window’ is seen upstage left, not so much shining light as letting some measure of light in. Men first appear in black costumes – with a single letter affixed to the chest – moving manically (lots of jumping; windmill arms). They’re soon joined by women (as I recall, wearing similar black costumes but without letters), and dance briefly as pairs, then split and regroup. Three of the women change into dresses, and, among other dances, a woman in a red dress dances with a man while others shine lights on them. As the dance ends, the rear curtain is opened to reveal a factory-like bare wall with industrial pipes, and the women, who had assembled behind the men, push them over onto the stage floor. And during the bows, the men are assembled such that the letters on their chests spell the word ‘THINK’ (perhaps the sixth man’s costume had an asterisk – I didn’t notice).

Even assuming that Duato’s intent here is to represent prison life and/or a riotous situation in a riotous manner, it’s a dance non-sequitur beyond that unless one assumes that the women are, perhaps, stand-ins for prison guards (or, maybe, visions of the inmates’ companions) – but that assumption too doesn’t hold up internally (or make much sense). Be that as it may, the audience roared its approval.

Although it’s an understandable scheduling decision, given the capabilities of its dancers and its artistic legacy it would be unfortunate if DTH limits itself primarily to dances like the final two on the program that give audiences what they want to see. In any event, and with respect to that tribute to the black ballerinas honored on stage, one who particularly caught my eye was Courtney Lavine, a highly promising dancer with ABT who I’ve recognized several times previously in performance reviews. As much as anything else, her presence as a contemporary representative (there may have been others I didn’t catch), together with such current DTH dancers as Fentroy, demonstrates that there is no necessary incompatibility between being a woman of color and being a ballerina, without relying on a loose definition of the word.