The artistic directors, DTH’s Virginia Johnson and MCB’s Lourdes Lopez, are both extremely successful and achieved their current positions after enjoying long careers as ballet dancers. They’re inarguably important role models. In a panel discussion hosted by former MCB dancers Michael Breeden and Rebecca King Ferraro as part of their popular podcast Conversations on Dance, Johnson and Lopez revealed that neither had aspired to become an artistic director of a ballet company. One wonders whether this is because there were almost no women in such roles for them to look up to in crafting their goals. Johnson and Lopez were joined in the discussion by Pam Tanowitz, who was commissioned by the Kennedy Center to create a work using dancers from each company. Tanowitz, too, said she didn’t originally aspire to be a choreographer. These women seemingly fell into these roles because they were pursuing what they love. They all acknowledged that it’s critical to support women as artistic directors and choreographers, and that more can be done to do so. 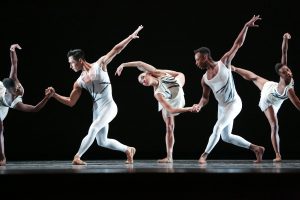 How fitting that my favorite work during 2019’s Ballet Across America was Passage, a ballet choreographed for DTH by a young woman, Claudia Schreier. The rest of the excellent Passage artistic team are also women — costume designer Martha Chamberlain, lighting designer Nicole Pearce, composer Jessie Montgomery and conductor Tania León. But how frustrating that the printed program contained no information about the choreographers, especially, with the exception of Tanowitz. Promoting female choreographers ought to encompass proudly publishing their biographies. I’d have appreciated the inclusion of information about all of the artistic collaborators, actually, and I found it confounding that with a theme of celebrating women’s leadership in the arts today this was overlooked.

Passage was commissioned to commemorate DTH’s 50th anniversary and the 400th anniversary of, among other things, the first documented arrival of enslaved Africans. It’s a stunning ballet infused with vivid imagery. In Passage’s opening moments, dancers emerge from a cloak of darkness and walk slowly forward from the back of the stage. Costumed in white, with a few inky swishes of dark roots or branches, women on the shoulders of men form ship masts and sails. Additionally, the white costumes lead to the dancers appearing like ghosts or skeletons. 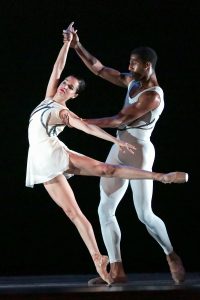 There are many memorable choreographic moments. Overall, Passage feels fresh, and it comes across, impressively, as both classical and yet abstract. Schreier is very cognizant of lines and shapes and space and possibilities. She skillfully utilizes stillness and swingingly fast footwork and tucks in surprises. The audience audibly gasped with wonder and spontaneously clapped when female dancers held aloft by males took huge arching dives as if swimming and coming up for air. An extended arm, fingers splayed, is a recurring gesture. It’s a heartrending reach for survival and a plea for hope. Maybe it signals not only a desire for release and growth, but also a helping hand offered to others so that they know they’re not alone. Or maybe it’s simply an outcropping stretching into the future.

Montgomery’s music is lovely and haunting, and the dancing beautifully captures some of the composition’s tension. Ballerinas are dragged backward and spun, their legs pointed like sides of a triangle wide beneath them. Anthony Santos and Derek Brockington were riveting as they engaged with each other, pulling, supporting, leaning backward all the way to the floor.  I admire the work of each of the artists involved in Passage, I definitely look forward to seeing more of Schreier’s robust choreography. 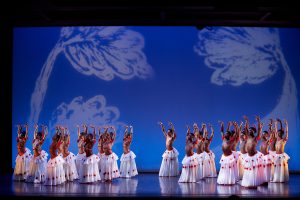 In addition to Passage, DTH, in collaboration with members of Collage Dance Collective, performed Dougla, a fan favorite, to close the joint DTH and MCB performance. Dougla, which presents a marriage celebration between two Dougla people (people of mixed Indian and African descent, particularly in Trinidad and Tobago), premiered in 1974 and was later revived. It’s a colorful and hypnotic spectacle, full of charming head nods, hip swooshes, high energy jumps, and even cartwheels. The costumes are bold, the dancing is entertaining, and the music’s incessant drumming rhythms seep into everything, resulting in smiles all around.

In its solo program, DTH began with George Balanchine’s Valse Fantaisie to music by Mikhal Glinka followed by Diane McIntyre’s Change. Valse Fantaisie is new to DTH, and it shows. The dancers have the regal comportment down, but not yet the crisp lightness called for in this piece. 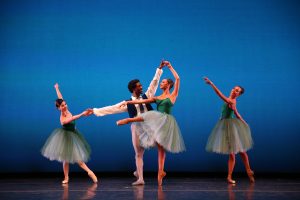 Change is quite a distance away choreographically from Valse Fantaisie, and here the dancing fared better. Three female dancers (Lindsey Croop, Ingrid Silva and Stephanie Rae Williams) fiercely attacked the material, which is a tribute to female empowerment. The program notes say Change was “inspired by women — Black, Brown, and Beige — who have refashioned the neighborhood, the country, the world through their vision, courage, and endurance.” The costumes, designed by Oran Bumroongchart, feature a gorgeous patchwork of tights worn by former DTH dancers. As the program points out, the dancers, therefore, “perform clothed in the legacy of their predecessors.” The dancers look undeniably attractive but they’re primarily tough, and they don’t hesitate to grunt as they use their bodies to express women’s stories of tribulation and triumph.

MCB also chose to start both the joint program and its solo program with a George Balanchine work. In Walpurgisnacht Ballet, the star is youthful girliness, or Balanchine’s idea of it anyway. Women in a dizzying display of candied pastel shades of pink and lilac, with hair ribbons streaming from around long ponytails, in the end let their hair down, quite literally. In between, there’s a proliferation of intricate geometries and elegantly twisting bare arms. Katia Carranza and Rainer Krenstetter (in a role debut) seemed a little bit cautious, but Nathalia Arja danced with abandon throughout while nailing the demanding precision called for by the choreography. 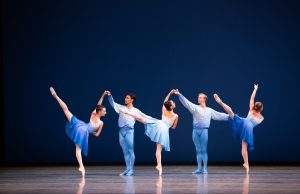 To close its independent program, MCB performed Brahms/Handel, choreographed by Jerome Robbins and Twyla Tharp. Arja again stood out and absolutely sparkled, bright as an emerald, as the ballerina lead in green. Brahms/Handel, although well crafted, doesn’t do particularly well as a closer, in my opinion, especially in a program dominated by other classical works. Its parade of dancers in sky blue and grass green, and the interweaving of the colors, is mildly interesting, but not so rousing that I’d place it at the end of an evening. The flinging, hands on hips, flex-footed quirkiness of Tharp and Robbins is fun, but for me the ballet doesn’t add up to much more than that.

Another odd choice was the Carousel Pas de Deux choreographed by Sir Kenneth MacMillan. MCB’s Jennifer Lauren and Chase Swatosh performed it superbly, with all the requisite emotion. I found the inclusion of this pas de deux strange, though, because it preceded Heatscape, a work choreographed by Justin Peck, and Peck recently choreographed a revival of Carousel on Broadway. To me, at least, it seemed peculiar to spotlight MacMillan’s fine pas de deux and then follow it with a work from Peck, who just tackled Carousel‘s choreography. I found the choice odd for another reason as well. In this era of #Me Too, the coaxing and wrist and ankle grabbing in MacMillan’s pas de deux raise questions about power and consent. As an excerpt from the musical, with no context, it certainly appears that the young woman is pressured and taken advantage of, and it made me cringe that she pines for the man when he leaves her.

Peck’s Heatscape falls into my category of “middle Peck.” I neither loved it nor hated it, but would rank it somewhere in the middle of the Peck pieces I’ve seen. The scenic design by street artist Shepard Fairey is striking, and it serves as an intriguing backdrop. Dancers rush in a line to the edge of the stage, jog about, and stand in a cluster and face one excluded dancer, all elements I’ve noticed in other Peck works. I’m generally not in favor of jogging on stage. Jogging and rushing in a line and staring in a clump at someone on the outside aside, there is some choreographic cleverness to Heatscape, but not enough to keep my attention the entire time. The exception to this was Shimon Ito, who was so authoritatively graceful and smooth that I was perpetually glued to him. Ito truly came alive in Heatscape and delivered a masterful performance.

Last but not least, the two companies contributed two dancers each (DTH’s Anthony Santos and Stephanie Rae Williams, and MCB’s Renan Cerdeiro and Lauren Fadeley) to Tanowitz’s creation, Gustave Le Gray No. 1, to music titled Gustave Le Gray by Caroline Shaw, the youngest winner of a Pulitzer Prize for music. (Gustave Le Gray was a noted nineteenth century French photographer). Pianist Sylvia Jiang played the heck out of Shaw’s composition, sticking the landings of her fingers on the piano keys even as the dancers moved her instrument from one side of the stage to the other, with Jiang continuing to play as she walked. 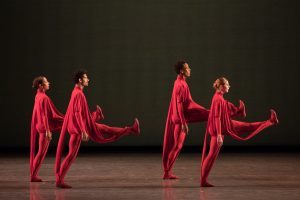 I felt about Tanowitz’s choreography as I did about the tomato red costumes by Reid Bartelme and Harriet Jung. At times I smiled and liked what I saw, and at other times I sort of intensely disliked what was in front of me. The costumes looked like pajamas made for a flying squirrel — stretchy fabric hung from the neck and ending at the ankles, wider and cape-like toward the top, narrower and rubber band-ish at the bottom, with a unitard underneath. The costumes are ugly, comical, and then suddenly brilliant. The choreography, similarly, runs from tilting airplane arms that, like jogging, I could do without, to unexpected thigh slaps and shoulder hugs that are more eye-opening.

The dancers from both companies did a tremendous job leaving classical ballet largely behind but retaining ballet’s elegant lines. Legs flew out perpendicular to the body, dancers jumped straight up like jumping beans. When Gustave Le Gray No. 1 was over, I admit, I kind of wanted to see it again. It’s unclear whether anyone will have that chance. Tanowitz owns the rights and is able to license it out, but I don’t know if the companies will keep it within their repertory.