In recognition of the 25th anniversary of the Americans with Disabilities Act, New York University’s Skirball Center for the Performing Arts presented a program on Sunday involving physically disabled and non-disabled performers by two physically integrated companies: AXIS Dance Company from Oakland, California, and Heidi Latsky Dance, based in New York.

The program actually started before its ‘formal’ beginning, and quite successfully so. During the past year, Latsky has assembled a group of performers and presented movement installations at various venues in the city. One, a fashion show/museum-like moving statuary display, recently premiered at Lincoln Center, and was displayed Sunday at Skirball Center. Few presentations deliver its creator’s intent as clearly as this one: the body as spectacle; the criteria by which people see, and judge, other people; the tendency to focus on a person’s disability; and ultimately how significant, but unimportant, disabilities are.

Called On Display, Latsky’s installation here consisted of 28 performers – a heterogeneous assortment of sexes, races, ages, ethnicities, sizes, and disabilities (or not), only some of whom are with her company. They filled the theater lobby, the gathering area outside the seating entrance, and nooks and crannies in between, each occupying an individual space either on the floor, on a pedestal of sorts or a makeshift stage. Each performer wore a white tunic-like costume that gave the appearance of sameness, but which was cut or worn in a certain way so as to make each figure look both part of the group and distinctive.

As the performers pose, change facial expression, and occasionally move within their fixed perimeters, emotionless voices describe them. And these descriptions are simultaneously recorded on screens hung from the sides of the lower level display. The descriptive terms include those most people would use to describe someone else, but also qualities that a viewer might never publicly acknowledge as a component of the object person’s ‘body image’: “…Female, 60s…tired eyes…arthritic hands….missing entire right leg at hip…moves with slow and steady gait….heaving breasts… walks with little steps…” Viewers were encouraged to sit and watch and photograph the performers. The performers stared back, but with blank, expressionless eyes. And the process reveals as much about the observer as the observed.

The formal program opened with AXIS’ performance of Divide, choreographed by Guest Artistic Director Marc Brew. The piece is abstract, with the thinnest of themes being the ‘divide’ in human interaction – including between those with physical impairments and those without. 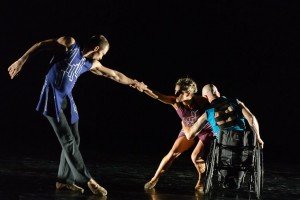 Divide is essentially a pas de quatre for three dancers (Keon Saghari, Brendan Barthel, and Dwayne Scheuneman) and a wheelchair, with a fourth performer, Julie Crothers, joining in. It begins with Barthel and Scheuneman (in the chair), upstage left, and a female body (Crothers) lying sideways just inside the stage right wings. The men move their arms forward, upwards, sideways – sometimes in sync, most of the time not. Saghari, an intriguing dancer who draws eyes for her fearlessness as well as her presence and capability, then emerges from the stage right wing, moves toward the men, and the dance proceeds to integrate all three (plus the wheelchair) into the performance as she transports from one man to another and back, at times balancing (using Pilobolus-like weight-shifting) on the wheelchair and the men.

At one point Scheuneman, separated from the other two, removes himself from his wheelchair, controlling his body movement with this hands and torso. And toward the end, Crothers finally rises, eventually joining Barthel in arm motions similar to what we saw at the piece’s beginning. All four dancers display an unwavering stoic demeanor throughout.

The difficulty is that none of this is meaningful, either visually or thematically. There is no denying that Divide includes some nifty staging and acrobatic partnering, and it was illuminating to see Scheuneman maneuver both himself and his wheelchair. But aside from that, Divide’s minimalism was its message.

But, perhaps unintentionally, Divide also provided a message beyond what was or was not apparent in the choreography. Crothers appeared to have had no purpose in the piece, and wasn’t even listed in the program. But for several minutes after she emerged from her prone position, I didn’t notice that she had a disability. Her movement quality was so smooth, and her execution so clean, that the absence of half of one of her arms not only didn’t show, but didn’t make a difference even when it did. So perhaps ultimately, Divide is instructive for demonstrating that there needn’t be one. 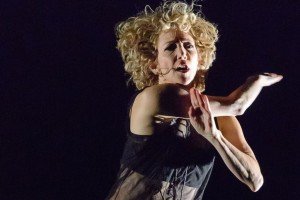 Latsky’s company followed with two dances. Solo 1 is a straightforward dance for Latsky, in which she stands in place swiveling and rotating her legs, torso, and arms as connected but independent entities. This essential movement quality doesn’t change significantly from beginning to end. That might sound like the makings for a dull dance, but it wasn’t. The accompanying music by Chris Brierley is circular and repetitive without being repetitious, building in speed and intensity as it proceeds. Latsky’s choreography did the same, and the result was mesmerizing. Think Bolero, but on a higher plane, and at a lower decibel level.

Somewhere, which followed Solo 1, is an abstract piece for seven performers. Although occasional connecting images attempt to draw the piece together, Somewhere is primarily a collection of skillfully crafted and executed duets and solos, some of which are quite interesting. I particularly admired the pairing of Gregory Youdan, Jr. and Jerron Herman, in which the intentional positioning of the dancers’ arms makes Herman’s disability effectively disappear, and the sweeping, almost panoramic solo by Landes Dixon, a very tall and dominating dancer who couples his strength with a measure of delicacy. And the final moving image, of Herman standing in place but convulsively shaking every part of his body as if he was absorbing the shocks of an earthquake was quite extraordinary, with his disability once again being completely irrelevant.

Somewhere is an interesting dance because Latsky has individual dancers or pairs doing interesting things. But ultimately it’s a collection of dances and dancers that doesn’t go beyond being an exhibition – albeit a good one – of physically integrated dance. The final piece on the program, however, does. AXIS’ to go again, conceived, choreographed, and written by Joe Goode, is both heartbreaking and life-affirming, and it’s a significant addition to anyone’s list of superb dances – physically integrated or not.

to go again is an intimate dance for four in which the dancers speak words actually written by military veterans or members of their families, and then execute dances that amplify the words. But describing to go again as a series of choreographed mini-stories doesn’t do the piece, or the dancers, justice. Each dance episode is unique and integrated seamlessly into the script, the staging is imaginative, and the dancers, both those physically disabled (Crothers and Scheuneman) and those apparently not (Nick Brentley and Sophie Stanley), were first rate on all levels – their dancing, their acting, and their vocalization. Even though it’s about veterans and their families, to go again is primarily about the tribulations and triumphs and sufferings and dreams of people. And it, more than anything else, proves that beauty in a dance performance can transcend its subject or the physical capabilities or disabilities of any of the dancers involved, as long as it can move the heart.