Despite having seen two ballets presented by Dances Patrelle in recent years that were entertaining and accomplished (The Yorkville Nutcracker and Romeo and Juliet, each choreographed by the company’s founder and Artistic Director, Francis Patrelle), I doubted that this little ballet company could present an original ballet version of Macbeth with Shakespeare’s violence, intrigue, and sex intact.

I should have known better.

To open its 26th performance year, Dances Patrelle revived Macbeth, the first ballet that Patrelle created for his own company. While not without flaws, Macbeth is another example of the company’s competence and accessibility – but it also illustrates its unexpected audacity. 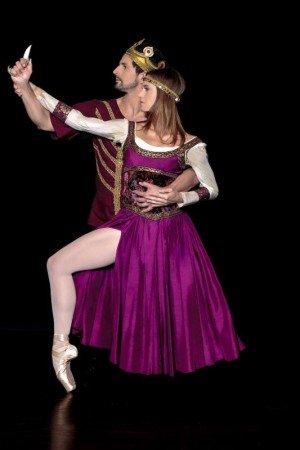 Dances Patrelle was founded in 1988, and is as much a “neighborhood” ballet company as any ballet company based in Manhattan can get. It’s an Upper East Side institution, with a supportive local audience that knows what to expect, and knows that Patrelle and his dancers will deliver it.

Through its connections with several outstanding area ballet schools (particularly with Ballet Academy East where Patrelle has taught for many years), Dances Patrelle has been able to mine local talent, at times including dancers affiliated with “major” ballet companies, to add luster to its productions. But based on the programs I’ve seen, the company relies primarily on a nucleus of experienced dancers well-capable of executing Patrelle’s choreography and delivering the essential acting to complement it. It’s not American Ballet Theatre or New York City Ballet, but it doesn’t pretend to be. Similarly, Patrelle may not be in the same league as more celebrated ballet choreographers, but in this context that’s not important either. If the ballet vocabulary is somewhat limited and the choreography at times repetitious, this is far outweighed by admirable inventiveness and the successful transmission of intent – as well as a welcome absence of self-indulgence. He deserves the many accolades he’s received in the course of his extensive teaching (this is his 45th year of teaching in New York) and choreographic career. 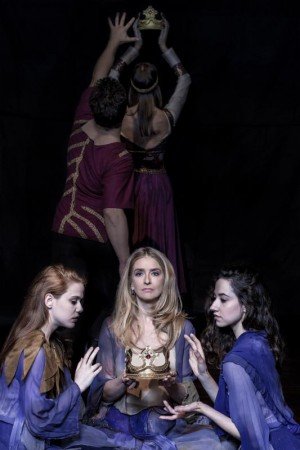 There have been other ballet incarnations of Macbeth, although I’m not aware of any that have made their way to New York. For example, long before Patrelle premiered his version in 1995, the Bolshoi mounted one choreographed by Vladimir Vasiliev. And a new incarnation was recently choreographed by former NYCB principal Robert Weiss for the Carolina Ballet. I’m sure there have been others. But aside from the bells and whistles that come with productions by major companies, if the story is told straight I doubt that there’s a significant difference between any of them – Macbeth is about as straightforward as Shakespeare gets. Nevertheless, Patrelle tells his version in what may be an idiosyncratic way, utilizing visually distinctive leitmotifs emblematic of overall themes in the play: power (and the passionate lust for it), and sex (and the passionate lust for it). Neither is particularly inventive or original, but they do the job.

To represent power, Patrelle utilizes a Crown. From the beginning of the piece, when a Prologue introduces the characters (skillfully interwoven among strategically placed “pillars” in the minimal set designed by Resident Set Designer Gillian Bradshaw-Smith) until the ballet’s final scene, the crown is practically omnipresent. A “real” crown is held aloft by many of the characters at one time or another as if it were a dream just out of reach, at times landing on a head; and, in case anyone misses the point, a giant “crown” is lowered from the rafters like a chandelier. To represent sex, Patrelle and Bradshaw-Smith do it the old fashioned way – with a structure that unmistakably is a giant phallic symbol. Most of the time, this structure sits upstage center dominating the set; at other times it morphs into the back of the king’s throne or a bed’s headboard. The two symbols may sound trite – and they are, but they’re also quite effective. 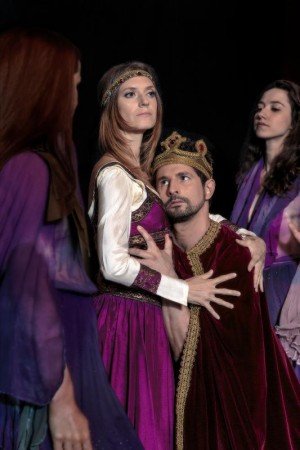 Less effective is a choreographic symbol that Patrelle uses to show resolute strength or manliness. At various times Macbeth or Macduff stand fixed in second position holding a sword vertically like a third leg (the pointed end drilled into the floor), and slowly demi-plie. It also does the job, but it stops the ballet dead whenever Patrelle resorts to it. And the mime could use some polishing (lips aren’t supposed to concurrently translate the mime). I also would have appreciated more choreographic variety overall, particularly for the three witches, who always seemed to move in exactly the same way whenever they appear. And although I appreciate that Patrelle stitched together excerpts from different Tchaikovsky symphonies to provide a sense of compositional uniformity, Tchaikovsky’s music often seems too “rich” for the period, and is so familiar that it at times dominates the choreography.

But generally Patrelle and his dancers transmit the story’s passion and intrigue effectively and dramatically. For example, the overtly sexual interplay between Macbeth and Lady Macbeth manages to convey the necessary lust (this is not a ballet for children), but without being unnecessarily lurid. And his use of similar movement quality in duets between Macbeth and his wife, and Macduff and his wife (particularly a sudden lift and drop) serves to emphasize the different emotional cores depicted (lust vs. love). I particularly liked the visualization in Act 2, Scene 4, of Lady Macbeth’s sense of guilt (“Out damned spot…”) – and here his use of excerpts from Francesca da Rimini: Symphonic Fantasy after Dante (Op. 32) in Act 2 Scene 4 works quite well. And Patrelle also does quite well in choreographically bringing Shakespeare’s “ghost” scenes to life.

The characters of Macbeth and Lady Macbeth appropriately dominate the production, and the portrayals by Martin Harvey and Mary Beth Hansohn were each finely nuanced, with a Game of Thrones sensibility. Harvey’s Macbeth, befuddled, manipulated, and over his head, did a particularly fine job with his “mad” scenes, while Hansohn’s Lady Macbeth was the cool, controlled, driven puppeteer without a conscience, delivering scenes of dispassionate passion, as well as a spot-on depiction of guilt, in the process. Maximilien Baud was a stalwart Macduff, and Therese Wendler as his wife provided the human warmth that the production would have otherwise lacked. Stephen Campanella’s Banquo was a strong second fiddle: dynamic, loyal, and vengeful, and Morgan Stinnett and Roberto Leon, as Malcolm and Duncan, respectively, delivered fine portrayals. As the three Witches (who doubled as Murderers), Heather Hawk (the queen witch and the most feral of the three), Nancy Cantine, and Temple Kemezis (at the performance I saw) enlivened the production immensely with their pizazz, and were particularly welcome if you like your witches to be winsome as well as wicked.

For a small “neighborhood” company with no airs or grandiose ambitions, Dances Patrelle always seems to exceed expectations. The next time they perform, it might well be worth a trip into their neighborhood.