Oh, how I miss Merce. Cunningham that is. Some of what I miss is the invention and forward-thinking. How his work often appeared 30 years ahead of its time. For those that may have missed seeing his oeuvre, Merce embraced and promoted, among other tools of the trade, non-narrative and the random coming together of stage elements such as décor, costumes, and music, these not being pre-planned as a unified whole but created separately and then brought together for the premiere(s). I love the story one of his former Martha Graham colleagues, Nelle Fisher, told me about how after not having seen Merce or his work for years, she attended one of his shows in Amsterdam (where she was teaching), went backstage and said to Merce, “I don’t get it!” who then replied, “Nelle, there is nothing to get!”

Daniel Roberts’ recent showing of his choreographic output at Seattle Velocity Theatre reminded me of this. Roberts’ work and vocabulary are Cunningham-based and enjoy the pixie’s fluency and seemingly endless capacity of invention and freedom. (Roberts began his career as a pianist for ballet and eventually studied both this discipline and modern dance, joining the Merce Cunningham Dance Company for six years. He is currently an Assistant Professor of Dance at Ohio State University.) 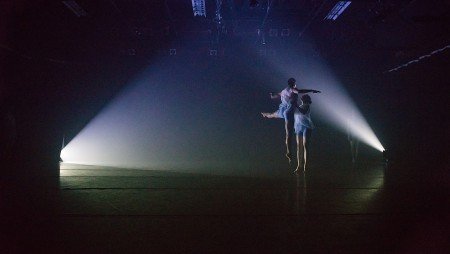 Yet his vocabulary is infused with tons of technical work, lots and lots of steps, turns, jumps, balances, that all help make wonderful Cunningham -esque visual non sequiturs such a passé with a tilt of the torso. By this I mean Merce made unusual combinations of bits and pieces — round arms where you might expect straight, and famously, a turned out fourth position with the back leg bent into plié, the front one straight with the foot firmly on the floor, and a first position port de bras.

Roberts’ program, Temporary Landscapes, delves deep into this work. Martha Graham used to intone the phrase and description of the “inner landscape” of the soul, and I was pondering how this line might fit within his work too, if at all. I think it does and nicely, too, as he gives us brief “temporary” views into a slice of time of his cast. 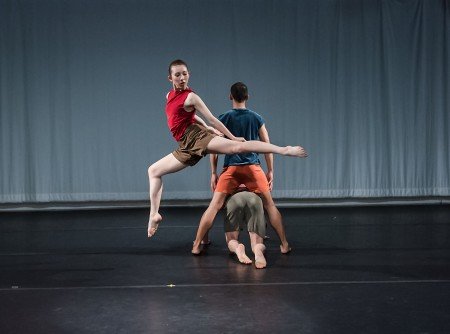 As described, the first work, Further Afield, a quintet created in 2014, is inspired by varying energies and motions observed at Sara Roosevelt Park on the Lower East Side in New York City. With an original score by composer Jeremy Stewart, this dance included duos, full cast moments, and importantly a setup or motif that was imitated, repeated, and varied by the cast. Legs extended to an inverted second position, hopping with torso and both arms turned and extended toward this back leg. Fierce dancing that only let up as cast members dropped in or out of the on-stage action. The full cast included Biag Gaongen, Anthony Milian, Mariko Nagashima, Hannah Simmons, and Erin Yen. I note that the two women were the only cast members from Seattle (and who are among the best dancers here), while the three men, according to the program notes, appear to be colleagues of Roberts from Ohio State. It was great to see and enjoy this high level and caliber of artists. 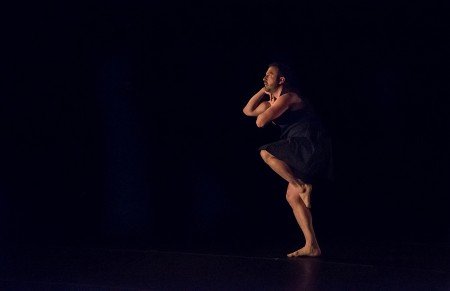 Personal Forest is a solo work Roberts created in 2014 which explores theatrical landscapes based on a variety of ecosystems present on the Big Island of Hawaii. Beginning in a crouched down, kneeling position facing stage right, Roberts began his solo with simple hand and finger movements and circles and built from there. Roberts is clearly an experienced and strong dancer and presented a solo tailored to his strengths — clear and clean use of line and power of presentation. My only fuss would have been that I would have recommended different performance attire, as what he wore not only came across as a dance dress but was not flattering to someone who is in better shape than most mere mortals — that and it hid him too much (which may have been the point but was unnecessary; he would have looked fine in practice attire). Drama Desk Award winner Arthur Solari provides an original music score setting an apt tone for the solo.

The program concluded with the world premiere of Night Cloud, a quartet made in collaboration with Seattle mixed-media artist Sangjun Yoo. Yoo’s installation used light projectors and haze (aka fog) to “create ethereal atmosphere to morph the stage space, revealing tableaux, silhouette, and varying spatial relationships between dancers.” Night Cloud was atmospheric for sure, suggesting a mood but while still retaining the premise of non-narrative and abstraction. The cast included the three men, plus Simmons. 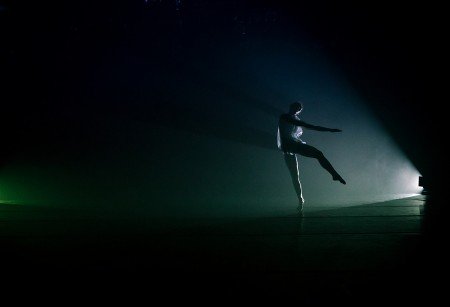 Roberts is a deft and experienced choreographer who presented a voice that was different and a welcome relief from the typical Seattle modern dance fare (by this I mean what seems to be the relentless rolling on the floor, jumping onto someone’s back, random vocal sounds, and just working their hardest to be unattractive, all in the name of art).

My only wish–and I lay this at the feet of Cunningham himself (and I loved him, don’t get me wrong) is that the sound scores/music types/sources need to be reconsidered. I was watching Roberts’ first piece and thinking how much better (level of art) and enjoyable (but not hoity-toity) it would be had it been danced to classical music (sigh). While these sound scores do perhaps provide an atmosphere and context, I’m increasingly finding them too loud (I don’t necessarily mean volume) and irritating more than anything. I mentally tune them out, while enjoying the dancing. (Tuning out like the capacity we have to ignore and not even hear elevator music.) While I don’t expect (or even want) fields of rainbows and butterflies, acoustic and classical music would only enhance and elevate work. 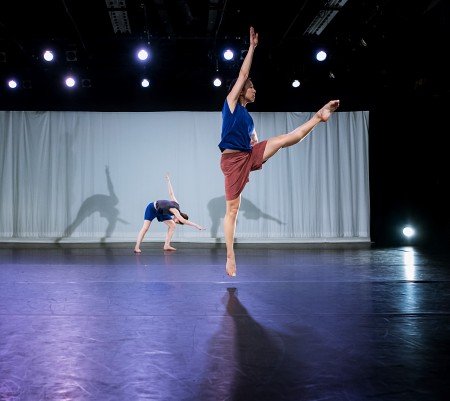 I was pleased to see that this program was sponsored by a number of supporters including 4Culture, Seattle, Velocity Dance Center, the Center for Digital Arts and Experimental Media (DXARTS) at the University of Washington, Ohio State University’s College of Arts & Sciences, and Cornish College’s Dance Department, among others. Truly, it does take a village to produce the lively arts and great theatre.

Roberts’ work clearly got me on the edge of my seat, pondering and reflecting, and enjoying an evening of some of the best chamber-sized dance I’ve seen in Seattle in a long time.