I was prepared early on in Danish Dance Theatre’s Black Diamond not to like it. First, there was the electronic music, by Trentemøller (other music in the work is by the Balanescu Quartet, Philip Glass, and Tom Opdahl), that sounded like someone was trying to communicate with aliens in outer space — aurally unpleasant growls and hums and bass thumps. Then there were the black costumes, by Charlotte Østergaard, that to some degree looked like they were made of trash bags. Some dancers had long black trench coats that reminded me of Goth teens. As well, the movement included abstract writhes and wriggles, and the dancers had cold, flat expressions. I see and hear all of these things pretty routinely in the contemporary dance world. And these are things that, when combined, normally make me cringe. To my surprise, however, as the piece progressed, I liked it.

Danish Dance Theatre’s Artistic Director Tim Rushton, the choreographer of Black Diamond, which premiered in 2014, has created a work that unfurls like a dark futuristic fairy tale. The narrative isn’t clear, but the mysterious atmosphere is, and it’s engrossing. The 13 dancers keep a certain distance. They move in ways that seem half human, half zombie. The set, by Johan Kølkjær, dominates the scene. During Act I, there is a rectangular black backdrop that reaches from the floor to well above the dancers’ heads, from one side of the stage to the other. It has a unique texture and sheen. There is a pattern of geometric figures on the wall, like puffy quilted pinwheels made of triangles. The material has a slight reflective quality. The lighting design, by Jacob Bjerregaard, enhances the set, costumes and eerie environment. 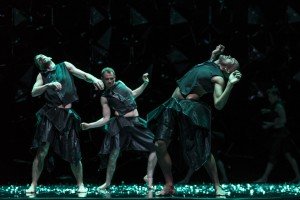 In the beginning, there are a pair of dancers, one behind the other, that play tricks with twinning. One dancer’s deeply arched back creates a headless body, but the other dancer’s head fills the blank space. Their arms move out from their sides like blades of a single Swiss Army knife. A third dancer is curled up on the ground ahead of them. Dark, shimmery confetti flutters down. Some of the dancers that join have their faces covered by mesh-like masks, rather like what fencers wear. The male dancer that had been lying down stands upright, bare chested and unmasked. He seems to represent a familiar version of humanity. The others are a bit creepy. They roll and slink across the stage like spiders and bugs. When excess black fabric is lifted from a crouched dancer’s arm, it resembles a bat’s wing. A group of dancers spins their arms up and around, like witches casting spells. Another group swings their arms like pendulums as they glide backward in lines across the stage, like speed skaters on rewind. Later in Act I, the dancers, raised on their knees, rock back and forth, making what seems like something painful to do look easy.

There’s a trio during which a female dancer, generally straight as a board, is shifted between two male partners. She leans and is caught under her arms, she’s lifted high, she’s dipped and swung. When groups gather tightly, they move their heads in a funky/scary manner reminiscent of Michael Jackson’s Thriller music video. Their arms are bent and jut out like hungry spirits performing a loose yet stiff robotic nightclub dance. Perhaps the dog in the audience behind me thought the dancers posed a threat, because at this point the dog began growling and snorting. While my dance viewing has been disturbed by a cell phone too many times to count, having a dog provide a distracting noise was a first for me. 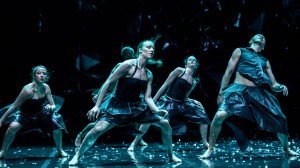 The program did not note that there would be an intermission, so I was initially disappointed by the length. I was also confused because Black Diamond, at what turned out to be its halfway mark at 45 minutes, struck me as incomplete. Act I ended with a small handheld-size glowing orb, and Act II began with the same orb. When I realized the performance wasn’t over, I was relieved that I would be given more of the story that had drawn me in.

Act II parallels Act I, especially at first. The music seems similar to the music at the start of Act I, and the movement seems similar, too, although the dancers are clothed in icy pale gray, rather than black, and the set piece changes from black to a mirror image silvery foil backdrop. There are again games with twinning. I appreciated the repetition of ideas. A braid of two dancers, knotted together, in unitards with fabric covering their faces, rests on the floor with the glowing orb in front. They engage in a fascinating extended duet that remains low to the ground for a long time, wrapping and unwrapping their pretzeled bodies. Subsequently, after the two come to standing, their limbs are manipulated by another dancer. Like adjusting mannequins, a head is twisted, and arm is turned. Stubbornly, one of them won’t quite stay as she is placed, causing the audience to erupt in amused laughter. Eventually this one is carted off. 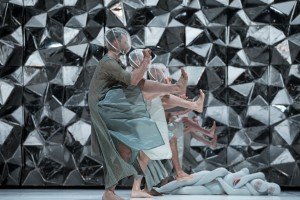 Like in Act I, when the dancers stand close to each other, they look like they’re planning something nefarious. With staccato jerks, the dancers move, hands near their stomachs, shifting uncomfortably as if they’re suffering from gas pains. As Act II forges ahead, dancers in black costumes return to the stage, combining the two halves of the program. Men in very long black capes drag women on the ends of their garments. Slowly, the erect dancers, gently moving their arms, are pulled across the stage in waves. I don’t want to spoil the ending, or even offer an interpretation of it, as I think it’s worth preserving some of the suspense that Black Diamond successfully conjures.

Although it wasn’t quite Halloween, Black Diamond certainly put me in the mood for this holiday of fun and fright. I recommend this imaginative work, and I hope to see more of Rushton’s choreography and more of the Danish Dance Theatre’s fine dancers in the future.