When a contemporary dance company makes its first independent appearance in New York (they appeared previously in 2013 under the umbrella of an “Ice Hot” Nordic Dance Festival) and brings with it an evening length dance, it signals, at the very least, that it intends to make a statement. When that evening length dance is stunningly choreographed and executed, even if it’s meaning (it may be abstract, but it’s intended to say something), is unnecessarily dense, it indicates that the company’s intention has been met. Black Diamond, choreographed by Danish Dance Theatre’s Artistic Director Tim Rushton (who also is credited with its conception), is a curious, outrageous, intelligent work of dance art that, although a bit pretentious and a lot over the top, is captivating as a visual experience and fascinating as an intellectual puzzle. And even if one doesn’t “get” the cerebral part of it (and I’m not sure I did), Black Diamond is still endlessly riveting.

Initially, I must admit to being partial to dances that not only look good visually, but that either make me “feel” or make me “think” (or, sometimes, both). Black Diamond, in addition to looking good, made me think. 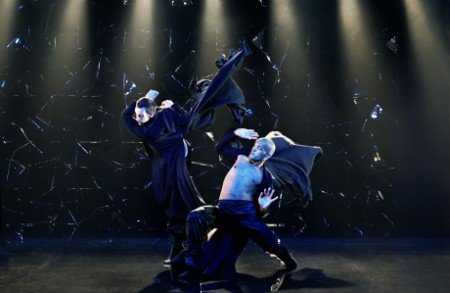 It’s tempting to begin a review of Black Diamond by quipping that Halloween came to the Joyce Theater a little early this year. And certainly the outrageously magnificent costumes, by Charlotte Ostergaard, which include net-like masks, capes, and headdresses, if worn by trick or treaters, would earn their wearers enough sugar to keep dentists in business for years. Or get them arrested. But though decidedly strange, the costumes have a purpose. And again, although I don’t know if I’m right (of course, there is no one “right”), it just another piece in the intellectual puzzle.

Further, Black Diamond has an other-worldly sense to it. The minimal but striking set design by Johan Kolkjaer and the lighting by Jacob Bjerregaard, places the piece on some desolate, dark, alien planet.

But although the setting is alien, I don’t think that’s where Rushton is going with this (although that’s definitely a way to look at it). This certainly is a different and unusual environment, but it’s not alien in the science fiction sense. If it’s a journey to a planet, I think it’s a long, convoluted, journey back to this one. 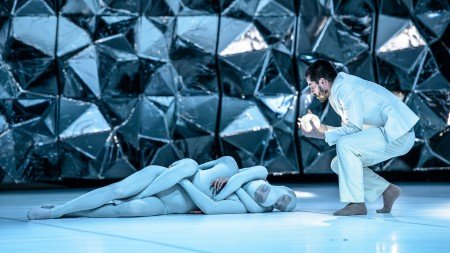 Much of Black Diamond is choreographically rough, with angular, jerky movement throughout. But that’s not all there is here. The movement quality is consistently varied, almost to the point of visual exhaustion for all of it to register. And that’s just the movement in general. The staging is assembled so impressively that nothing looks repetitious, even though there’s considerable repetition. Rushton utilizes every corner of the stage, and beyond. When one group of dancers is dancing slowly downstage, another group is in rapid motion upstage. While one group moves vertically, another moves horizontally. But it never looks forced or busy. In its totality, it’s a mesmerizing piece, and there’s never a dull moment.

The dance clearly distinguishes between the inhabitants of the dominant dance group (12 of the 13 dancers), which itself has something of a hierarchical structure, and a single male dancer who is smallish in physical stature, shirtless and wears a ragged-looking pale covering below his waist to his knees–very much in contrast to the elaborately costumed “others.” Unlike the sophisticated others, who are more advanced beings (whether they’re supposed to be alien life forms or, as I’ll posit later, more heavenly beings), he’s a dull, ignorant, and plodding outsider, with little importance – except he’s obviously significant to the others. To me, this character, played by Luca Marazia, is a male human – or human prototype; an empty vessel to be molded and filled. Indeed, at several points, the life forms, who at times are gathered together in a scrum as if to strategize or receive instructions from one higher in the alien food chain, give “lessons” to the human to teach him how to move and communicate, and how to interact with others (lessons that, in at least one respect, he learns too well).

One particularly stressed choreographic point is that Rushton repeatedly has groups of dancers purposefully walking (at an accelerated pace) backwards, horizontally upstage, with their legs and arms outstretched so they gobble as much of the stage with each backward step as possible. It’s apparent in this piece that nothing is done for show–these steps, stressed frequently, must have a purpose.

And then there’s this ball of light; clearly a life force.

All of this, to me, has meaning. The puzzle is figuring out what it is. In program notes, the piece is described as taking place in an “abstract universe, focusing on the aesthetic and form, …culminating in the revelation of a simple, beautiful naked body, the symbol of a hopeful and and sensitive humanity.” Well, yes. But that’s the abridged version of Rushton’s intent. It had to be, and is, much deeper than that. 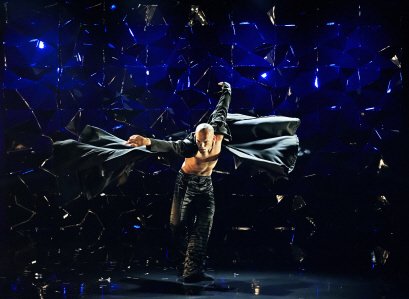 To me, Rushton here is describing not just a symbol of humanity, but the creation of humanity, in an inventively abstract way. The partly clothed, ignorant body who wanders though most of the piece is representative of Adam; the female who appears at the end is Eve, and the “aliens” are heavenly creatures – angels, teachers, workers, messengers. And the “alien” world is the domain of the forces that create humanity; it may be “heaven,” but it and its inhabitants don’t look anything like the way they’re supposed to (and, after all, who really knows?). I mentioned that the alien society is hierarchical – clearly one male figure, in a body length black cape, gives directions to others. And there’s a “Queen Bee”-costumed female who is a dominant, mysterious, and distantly controlling figure. To me, these two, perhaps together, are embodiments of the force, whatever it is, that creates the first humans. And that stress on walking backward? Perhaps it’s meant to reference going back in time. And then there’s the piece’s title. Black Diamond is a term used to describe coal. Coal is comprised, primarily, of carbon. And carbon is one of the building blocks of life.

But whether this was on Rushton’s mind or not is not really important. Black Diamond is one of the most unusual, intriguing and enigmatic pieces I’ve seen. It’s very different from other dances that I’ve described as “masterpieces”, but in its own unique way, it is. And if this is an example of Danish Dance Theatre’s repertoire, I hope they make a return appearance soon.