Danish Dance Theatre, now under the directorship of Pontus Lidberg, is an international mix of dancers who tour innovative contemporary dance works throughout Denmark. Both Hans Christian Andersen and Oscar Wilde have written well-loved tales about the nightingale, a drab little bird with a glorious voice, and Sebastian Kloborg and Allessandro Sousa Pereira offered their interpretations in an evening of two short works.

Kloborg sets himself a tough challenge, condensing the story of Andersen’s foolish Emperor and the wild Nightingale into a brief 30-odd minutes. However, he edits it well to build a successful narrative structure, greatly helped by the music. The commissioned score from Den Sorte Skole (The Black School), a Copenhagen-based music collective was superlative. It had the energy and drive to inspire, innovation to provide constant interest and moments of thrilling beauty. It is the first time the collective have worked with dance and let’s hope it’s not the last. 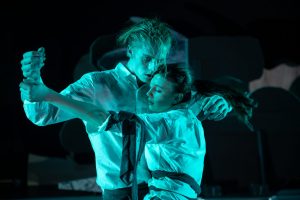 As the Emperor, Lukas Hartvig-Møller gave an impressive performance shifting erratically between stuffy poses and wild dance moves. He’s a pompous ass in the opening scenes but a tragic figure when his smart exterior is stripped away and he nears death. Emily Nicolaou, as the Nightingale, contrasts the mannered artificiality of the court in movement, fluid, expressive and full of inner calm. When she is captured, bound and manipulated like a puppet, her distress is palpable. Finally, he releases the Nightingale’s bonds and the two come to understand each other’s frailty. Their last duet is marked by choreography that searches for, and finds, meaningful expression supported by music that soars. As they collapse, a storm rages, the ensemble are blown back onto the stage where the idea starts to make sense as they take the form of a giant bird, a central body with dancers forming the great flapping wings.

Kloborg has a rare gift for comedy. The antics of the sycophantic courtiers, who clothes-brush the Emperor’s suit within an inch of its life, offer opportunities for the dancers that are seized on with glee. In black suits and chalked faces, they parade, with stylised poses and busy gestures. Comedy is a tough act but Kloborg did well and a little more honing down would improve even further. 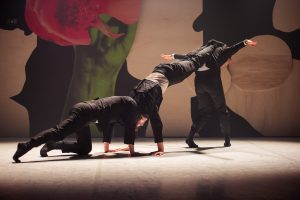 The second work, by Pereira, was marked by powerful waves of movement characterised by deep plié and detailed by fluttering hands. It was compulsive viewing as the trio of dancers, Edward Pearce, Joe George and Milou Nuyens, moved in ensemble harmony or split into solos and duets giving exceptional performances. The stage was partitioned by large wooden cut-outs of roses constantly shifted by almost invisible dancers enveloped in black net: an effective and slightly sinister presence.

Oscar Wilde’s tale of the nightingale who gives her life’s blood to redden a white rose for a faithless lover is desperately sad. It’s a complex task to express the asymmetric love story in dance and it was partially resolved as dancers mask their faces with crimson roses to finish in a wash of red light. The points of reference to the narrative were slight, but the quality of movement and strong performances easily carried the work. The music, a thrusting dynamic force, again by Den Sorte Skole, did much to support the work. The set by Sergei Sviatchenko, was less accommodating. To its credit is was both reversible and portable and used for both works. However, the pieces: rather crude cut-outs, solid and with a minimum of detail did little to support the imaginative themes of the two works or form a credible contrast. 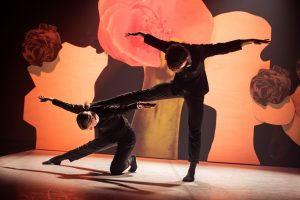 The Nightingale with choreographies by Kloborg and Pereira offered two very different styles, each delivered with skill and talent. It’s to their credit that Danish Dance Theatre can provide a valuable platform to present new works as well as a number of performances on tour.