Debbie Allen is an award-winning actor, director, and choreographer who is perhaps most widely known for having played a dance teacher at a performing arts high school on the 1980s’ TV series Fame and for frequent appearances  as a judge on the TV program So You Think You Can Dance. She’s also choreographed the Academy Awards a record ten times and has won three Emmy Awards for choreography. Given her relationship to television, it is probably not surprising that Debbie Allen’s FREEZE FRAME…Stop the Madness, which Allen wrote, directed and choreographed, reminded me of a musical version of an after school TV special. Freeze Frame has an important message — in this case about this country’s problem with gun violence — which is delivered in an entertaining and easy to comprehend but somewhat watered down format.

The program guide I was handed as I entered the theater warned that the show “contains mature themes that may not be appropriate for audiences younger than 13.” Nevertheless, Freeze Frame features a number of child actors, including some younger than 13. The “mature themes” are mild compared to what many young people today see on TV and in films, and even in video games. In fact, the show, in my opinion, seems perfectly appropriate for the pre-teen set and would make a great touring production for schools. It makes good sense to appeal to a young audience as  these youths will one day be adults and may have better luck changing the laws and culture that have allowed gun violence to become such a dark part of life in the United States. Gun violence, as Freeze Frame compellingly points out, touches all of our lives, including young lives, in particularly dramatic ways. 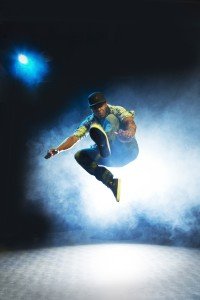 Freeze Frame could have packed a stronger punch with its message, but I imagine it was conceived to capture people’s attention, not by smashing them over the head with a position, but by presenting them with personal stories and getting them to reach conclusions for themselves. I was prepared for something awfully heavy. This show, however, perhaps wisely, moves forward with some much appreciated humor and lightness, not to mention some catchy songs and cool dancing. It’s not all devastation and violence, although it won’t spoil things to tell you that devastation and violence are present. Also present are other troubling aspects of life, from bullying to racism to the negative body image many young girls possess. These serious issues and others, like drug abuse and child abuse and gangs, are touched upon, but not dwelled upon, and become sort of lost in the larger theme of gun violence. Then again, gun violence is a complex problem, and it would be naive to think there aren’t significant connections between gun violence and many of the other social issues that emerge.

But on with the show. Freeze Frame, as the program guide explains, is “told in a fusion of drama, music, dance, video projection, and art.” Furthermore, hip hop fuels much of the soul of the performance. Freeze Frame opens with a video showing what appears to be a convenience store shooting. There’s a victim on the floor bleeding and a suspect who flees the scene and runs into a street party, where a police officer draws a gun. Then the action freezes. From that point, the story backs up and introduces various characters. There are multiple scenes composed primarily of music and dance numbers as the story unfolds. Specific Los Angeles neighborhoods are named. 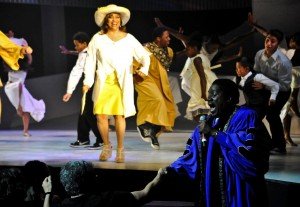 The set, by Michael Scott-Mitchell, is composed of a sweeping staircase and cement-looking columns that are reminiscent of a highway underpass. Graffiti, artwork, and videos are projected, even a large cross and colors like stained glass, making the set morph into different settings, including a church. There are too many characters to name and describe, and to some extent some of them are stereotypes. But there are some surprises, too. I liked the dancing cops simply because they were so fun to watch get down in their bulky uniforms. There’s something naturally amusing about a group of policemen who can pirouette with a holster at their hips. I also loved a basketball scene in which rival teams play the game through dance. The men jump high and turn in the air, mimicking shooting a basketball and showing the true beauty and athleticism of the sport.

Debbie Allen plays the role of two mothers, one an African-American pastor’s wife and one a Latina grandmother. Many current and former students of the Debbie Allen Dance Academy take on other roles. Alum William Wingfield as Jimmy, The Collector, is absolutely heartbreaking. I wanted to hear and see more of him because his character’s voice is one we rarely hear — that of the criminal. He speaks about having a brother who tattooed him with cigarette burns and his own desire to hurt people, obviously because he’d been so egregiously wounded as a child. Debbie Allen Dance Academy students Alijah Kai as a sweet young girl named Kayla and Ryan Phuong as Da Ni, her young admirer, make an adorable couple. They’ve got some stage swagger, for sure. Another intriguing character is Hunter Krikac’s Eleo, a sensitive young artist who incorporates sign language into his dancing. His street style dancing is pure poetry, along with the poetry of the words in “The Quiet Man” that accompany him (lyrics by Debbie Allen, music by Allen’s son Thump). 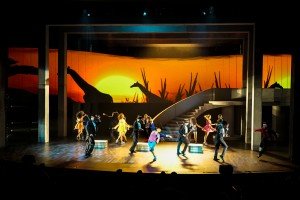 The crowded cast is a hard to keep up with, as individuals continually pop up, sing and dance, and then fade into the background again. The most effective dances, overall, are the group numbers by the male dancers, rather than the solos by the female dancers, some of which are thin and awkward and have a copious amount of high kicks and hip jiggles and buttocks wiggles. The original score, too, feels terribly busy. Nine artists are credited with the score, including Stevie Wonder, whose song “Girl Goddess,” with lyrics by Debbie Allen, was over before I was ready to let it go. Some songs hit the right notes, some lyrics pierce your heart, and a lot of the rest of it just washes over you without making much of an impact. A history lesson about African-Americans in the United States moving from African landscapes to the Cotton Club is incredibly abbreviated. More editing would have helped every aspect of the show, except the very end, where names of gun violence victims scroll on and on. Sadly, I suspect that one could have sat in the theater for the duration of Freeze Frame watching this list of names. Every day more names are added to this tragic list, and for that reason, I’m glad Allen is speaking out.