Former New York City Ballet principal dancer Damian Woetzel has been directing, curating, and hosting a series of performances at the Kennedy Center that begin with “DEMO.” I believe the idea is that instead of straightforward performances, the format is demonstration style, with explanatory narration. Woetzel has been bringing together artists from across different genres, putting them together around a common theme, and turning them loose on an audience with himself as a chatty ringmaster. Many of the same artists keep appearing, and the preparation time seems minimal. The thrown-together quality and chumminess hasn’t appealed to me. So, unfortunately, more often than not, these DEMO performances have resulted in me ending up rather bored and irritated. I’ve been underwhelmed by much of what I’ve seen. 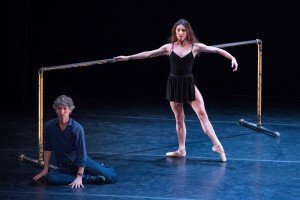 Damian Woetzel and Tiler Peck in Afternoon of a Faun, photo by Teresa Wood

I wanted to give the DEMO series another chance, though, because this particular installment was dedicated to Jerome Robbins, and the guest artists would be almost exclusively dancers, very fine ones. I figured I could sit through that pretty easily. And, indeed, this was one night of the DEMO series that I generally enjoyed. It’s hard not to enjoy the choreography of Robbins, or the talented hand-picked dancers Woetzel had join in this endeavor: Tyler Angle, Tiler Peck, Unity Phelan, Amar Ramasar, and Daniel Ulbricht, with special guests, Woetzel’s wife, former NYCB principal Heather Watts, and Julie Kent, former American Ballet Theater principal dancer and current artistic director of The Washington Ballet. Kent did several swirls around the stage with Woetzel to Shall We Dance from the The King and I, until they both were winded. Woetzel mentioned that he and Kent rehearsed “by text.” Also participating were vocalist Kate Davis and Kurt Crowley, music director/conductor of Hamilton on Broadway, on piano. Davis has a piercing childish voice that just isn’t my taste, and her renditions of popular songs from West Side Story didn’t win me over. 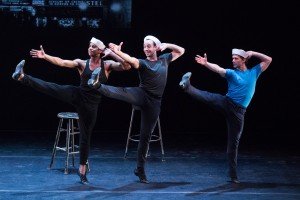 The dancing was lovely, as I anticipated, given the identity of the choreographer and dancers. It was fun to see the dancers up close in a more laid back atmosphere. They shined at least as brightly as they do in full costumes during full performances. Highlights were Tiler Peck and Tyler Angle in excerpts from Gypsy, Three Chopin Dances, and Dances at a Gathering. They make an attractive couple, and their dancing soars. Angle, in particular, radiated exuberance along with technical skill. He tapped in Gypsy very passably and performed the part in Three Chopin Dances superbly, even though he’d just learned it the day before (NYCB dancer Joseph Gordon, who was originally scheduled to perform, was ill and had to cancel his appearance).

What didn’t work for me, and hasn’t worked for me in past DEMO performances, was Woetzel’s oral presentation. There’s an unpracticed, informal, even unprofessional manner to the way he talks that makes me squirm. And he talks and talks and talks, like an old uncle at a family gathering. Yes, the point of the performance was to honor Robbins, and Woetzel offered important information and personal stories that enhanced the celebration. But the audience didn’t need quite as much blurting as we received. Most cringeworthy, in my opinion, were the multiple instances when Woetzel took on the role of coach, muttering comments and shouting, “Wow,” or “Beautiful.” He also narrated what the three sailors in Fancy Free (Angle, Ramasar, and Ulbricht) might be thinking — “Man, these buildings are bigger than anything I’ve ever seen,” or “Hey, what’s that over there?”  The poor dancers seemed almost startled sometimes, unsure whether they should keep dancing when he interrupted with this commentary. Sure, it was useful to hear, briefly, the sorts of things Robbins would say during a coaching session, but injecting random utterances and shouting directions mid-performance got awkward fast and detracted from the dancing. Watts, too, engaged in running coaching commentary when Peck danced some of the roles Watts once had, and it was grating. 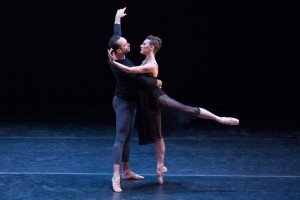 Tyler Angle and Tiler Peck in Dances at a Gathering, photo by Teresa Wood

Many balletomanes, I suppose, could overlook this and more because of the wealth of inside scoops about what it was like to work with Robbins (and Balanchine). The audience especially delighted in hearing a recording Leonard Bernstein made for Robbins in which he apologized for his compositions and Aaron Copland could be heard in the background jokingly taking the blame. Several old photos and film footage of performances and coaching sessions were projected onto the back of the stage, and these visuals also enriched the tribute to Robbins. For many serious fans, it was no doubt a delightful waltz down memory lane, as the names of past ballet dancers (Baryshnikov, Tanaquil Le Clercq, Patricia McBride, Jacques d’Amboise) and reminiscences about them came up over and over. The audience learned a lot of dance history, and the live dancing literally made this history come to life. I’d still have preferred more dancing and less talk. My default is always more dancing. I’ve also learned my default is for tighter performances, rather than the casual, carefree attitude that has permeated the DEMO series. 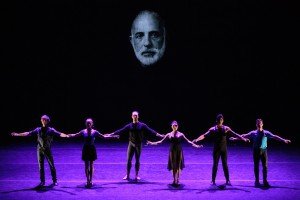 Both Bernstein and Robbins were born in 1918, and John F. Kennedy was born in 1917, so the centennial celebrations of these great men are in full force. I’m confident that all of these men will continue to be remembered for their contributions. I do hope Robbins’ legacy survives through  his choreography remaining in the repertory of dance and theater companies throughout the world.