Now in his fifth year of directing and curating a series at the Kennedy Center called DEMO, Damian Woetzel, former principal dancer with New York City Ballet (NYCB) and current president of The Juilliard School, again gathered some of his usual suspects (budding Broadway star and former NYCB principal dancer Robbie Fairchild, street dancer Lil Buck, veteran string quartet Brooklyn Rider, vocalist and composer Kate Davis, and the music of Pulitzer Prize winner Caroline Shaw). They put on a variety show that looked, at times, like it was thrown together at the last minute because some of it was, in fact, thrown together in this manner. Woetzel admitted that Davis shared the music for the finale, called A Story, with the dancers and musicians on Saturday night before the Monday evening performance.

I enjoyed seeing all of the artists share the stage, but is it the best idea to close with a piece so hastily assembled? The ending would have been more powerful if it had been more solidly constructed and rehearsed. Woetzel promised the audience that we would leave the theater with “hope,” but I left with a milder feeling more akin to benign indifference. 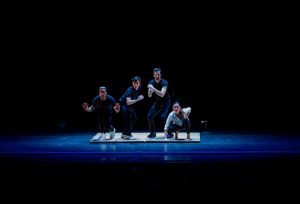 On the other hand, DEMO: 2020 started off with a bang, quite literally, as Lil Buck, Fairchild, young tap dancer Dario Natarelli, and contemporary dancer Melissa Toogood tackled 1-2-3-4-5-6 based on a rhythm by Steve Reich and masterminded by virtuoso tap choreographer Michelle Dorrance. The dancers clapped and spun and showed off their unique respective skills. Lil Buck often glided around the perimeter of the square dance platform in the middle of the stage, elevating ever so smoothly onto the tips of his white high top sneakers.

In And So, Davis sang and Brooklyn Rider played Shaw’s rather haunting composition. Davis’s voice rarely resonates with me, but I’ve never been disappointed by Brooklyn Rider. The music moved me, yet I longed to swap Davis’s sometimes muddled voice for Shaw’s searingly clear one (you can hear Shaw sing And So with Attacca Quartet on YouTube courtesy of Lincoln Center).

Lil Buck and his partner Jon Boogz performed Am I A Man (a twist, I assume, on the iconic signs proclaiming “I am a Man” from the Memphis sanitation workers’ strike led by Dr. Martin Luther King, Jr.). In orange jumpsuits, they shuffled onto the stage, invisible shackles around their feet. In individual cells formed by two distinct squares of light, the dancers addressed racial bias in the justice system through their frequently symbolic movements (in one gesture, a noose was fixed above the head and tightened). 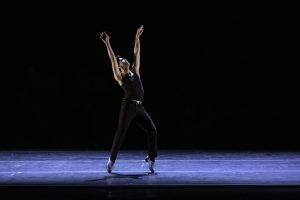 DEMO: NOW 2020, Dario Natarelli in I Have a Dream, photo by Mena Brunette

In an excerpt from Angels of the Get Through, to additional music by Shaw, NYCB principal dancer Lauren Lovette performed her own choreography, accompanied by Johnny Gandelsman on violin, while in an excerpt from Antic Meet, to music by John Cage performed by the musicians of DEMO, Toogood adeptly danced Merce Cunningham’s quirky choreography (she’s a former member of the Merce Cunningham Dance Company). These excerpts sped by.

I’m not sure the flirty stage crossings by Natarelli and Australian classical guitarist and Juilliard Student Ambassador Alberta Khoury were necessary, but the two dark-haired performers made a cute couple nonetheless. I was thankful for the introduction to both of these rising stars. They conversed playfully through their own rhythms, exchanging coy glances. Natarelli especially shined in I Have a Dream, in which he tapped his heart out to a recording of Dr. Martin Luther King, Jr.’s speech of the same name. 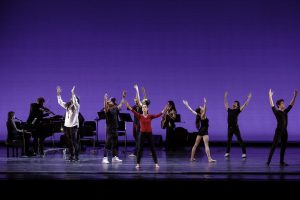 The cast of DEMO: NOW 2020 in A Story, photo by Mena Brunette

In a preview of a work in progress, Horizontal Duet, Farichild and Toogood danced choreography by Pam Tanowitz, arranged by Toogood, to music improvised by Gandelsman on violin and Michael Nicholas on cello. The dancers stretched, paused, and exhibited softness, and the musicians echoed this with piercingly lovely notes. As a group, they were curiously contemplative.

The standout work on the program was Fandango, with choreography by Alexei Ratmanksy and music by Luigi Boccherini. Interestingly, Fandango was also performed in March 2018 as part of the DEMO series, except at that time it was performed by NYCB principal dancer Sara Mearns. The work was created by Ratmansky for Wendy Whelan, but here it was adapted for the young NYCB corps dancer Roman Mejia, a recipient of a 2019 Princess Grace Award. The male version is equally sizzling and snappy. Mejia embraced the Spanish wildness while maintaining exquisite control. He commanded the stage with a smile, animatedly smacking a tambourine and clapping his hands, and his jumps and leaps absolutely soared. Mejia easily garnered the most applause of the night.