Excerpts from Azlan’s travel diary which by no means represents an impartial review, for besides being married into the performing arts world, he also travels to catch up with the works of family, friends and acquaintances.

April took me to fewer cities than I usually see in a month but with two of those cities being London and New York, I got to see more than I did the previous month, with the highlight being the world premiere of Broken Wings by Annabelle Lopez Ochoa. It was also a month of Christopher Wheeldon, with this prolific choreographer’s footprint all over the major cities of the world. 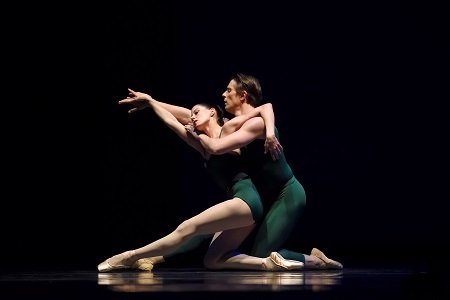 The last stop before leaving home was a quick drive up to San Francisco for the world premiere of Justin Peck’s In the Countenance of Kings. I entered the War Memorial Opera House in anticipation of the premiere but left highly inspired by the composition of the two other works bookending the program. It wasn’t that Peck’s ballet was not brilliant in its own right but the craftsmanship evident in both Christopher Wheeldon’s highly original Continuum© and the iconic George Balanchine masterpiece Theme and Variations weighed the evening heavily towards an expert manipulation of bodies, movement and mood to scores by Ligeti and Tchaikovsky, both clever compositions in and of themselves.

Peck’s first commission for San Francisco projects a bouncy exuberance matching the brassiness of Sufjan Stevens’s composition, The BQE, but in contrast to the rest of the program, the steps to my eyes seem more about Broadway-esque cuteness than masterly planned choreography. I was entertained nonetheless; just not highly inspired.

Gennadi Nedvigin, nearing his retirement in a few months, was a delight to watch in both the world premiere and Theme and Variations, exemplifying all that is great in a danseur noble.

The Winter’s Tale is everything I’ve come to expect from a Christopher Wheeldon story ballet. Clever, innovative, and well-thought steps and movements with highly imaginative – almost magical – sets, costumes, props and lighting that are very much integral to the production as are the dancers. But like one or two of his other story ballets, I find the choreography emotionally detached and not till the reunion scene in the final act that I experienced any tension for a Shakespearean tale that is known for its psychological drama.

Nonetheless, the performances were impressive, with Edward Watson’s rapid descent into madness as Leontes highly convincing and Zenaida Yanowsky flawlessly impeccable in matching timing and expression to technique in critical storytelling moments. 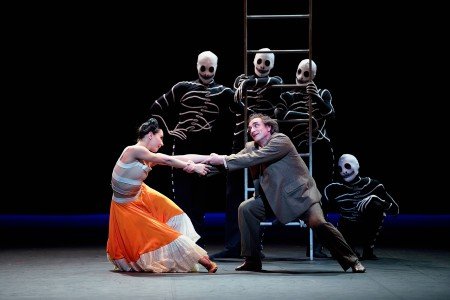 I panicked when I found out this program sold out and would have missed it if it were not for the generosity of Annabelle Lopez Ochoa (albeit after an email with the subject header “HELP!”). And I have to confess that I approached the world premiere of Broken Fire with some trepidation – for how can one depict the tumultuous and passionate life of Frida Kahlo in 30 to 40 minutes of dance? In a stroke of genius however, Ochoa has channeled the artist’s iconic paintings through powerful and colorfully painted dancers, introduced skeleton characters reminiscent of the lively Mexican celebration of Dia de los Muertos to depict Kahlo’s flirtation with death – of which my favorite part was when Tamara Rojo as Kahlo playfully punches at a skeleton in childish defiance – and in collaboration with scenographer Dieuweke van Reij conjured up a stage-grabbing magical box to depict birth, death and seminal life events in between. When you add to all that a Rojo performance in which she is not afraid to act “ugly” and the return of Irek Mukhamedov to the stage, this has to be a dream come true for the performing arts lover who is also a fan of Kahlo.

Aszure Barton’s Fantastic Beings is the type of fantastical ensemble work that typically makes me perk up. It did for the most part, with stunning pas de deux sections and mesmerizing corps  movements to selections of music from the imagination-spurring Anthology of Fantastic Zoology by Mason Bates. Some parts seemed long in execution however and did not hold my attention. But that could be due to the jetlag.

M-Dao, Yabin Wang’s take on the cruelty of a jealous Medea exuded angst and passion. Stylish with a high degree of dramatic flair, it could have been much more in my eyes or rather my ears. Luscious portions of the music by Jocelyn Pook and Tanja Tzarovska went unaccompanied with only three dancers for the first half of the work.

In the end, the significance of presenting a program of all world premieres let alone by three female choreographers cannot be lost. It is a brave endeavor that will mark the current leadership of the English National Ballet. 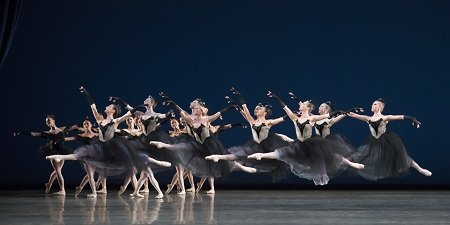 I was delighted to be able to attend this performance with my family and friends. And also excited to see Rebecca King, the daughter of a hometown friend and a former student of teachers in the family, lick her chops on the Koch Theater stage.

Miami City Ballet brought a distinctively New York City Ballet-centric program to Lincoln Center, with three works by choreographers very familiar to NYCB audiences: Justin Peck, Liam Scarlett and George Balanchine. It was perhaps a statement by Artistic Director Lourdes Lopez that the company can now be compared on the same footing as her alma mater.

While the dancers executed Peck’s Heatscape and Scarlett’s Viscera almost impeccably, it was Balanchine’s Bourree Fantasque where they really proved their mettle. With precision in the familiar NYCB breakneck tempo, they may also have added a bit of color in a verve I am not accustomed to at the home of NYCB. Former ABT soloist Simone Messmer perhaps exemplifies this the best with her vivacity in the second movement. 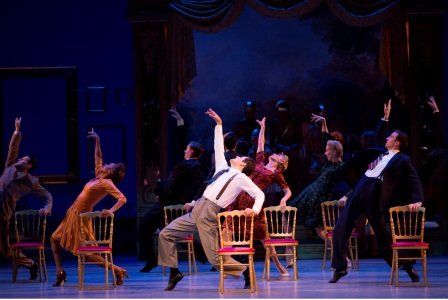 What more can you ask for in a musical? Broadway, Gershwin, a setting in Paris, singing, comedy, light drama. Well, apparently for some, you can get more than you want – at intermission, I heard a few people debating the merits of adding “so much” ballet to the mix on one end and the quality of it on the other.

This show – it’s inaccurate to define it as just a musical – is really a hybrid of multiple genres, with performers coming from or trained in different art forms: acting, singing, ballet, etc. Leanne Cope for example is a former Royal Ballet star who as it turns out is also an award-winning stage actress. It also helps in this performance as Lise Dassin that her looks – replete with pixie hairstyle – and awkward sprightliness are so reminiscent of Leslie Caron who played the central character in the movie.

An American in Paris worked for me because I appreciate all genres and I think it works for those who walk in with an open mind. But maybe it also helped that I got some insight from Associate Choreographer Sean Kelley, another hometown friend of the family. This of course begs the age-old question of how to set expectations appropriately. 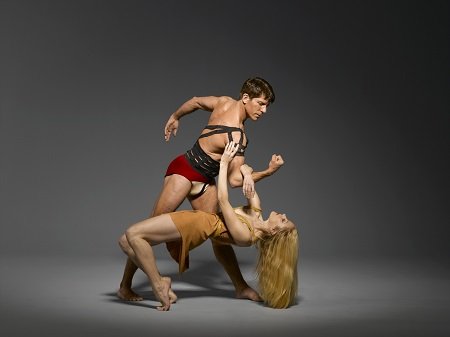 In an attempt to keep the company relevant, Artistic Director Janet Eilber has brought in or commissioned new works by accomplished choreographers (Nacho Duato and Marie Chouinard). However, I found the mixed historical and contemporary programming brought attention to the datedness of the Martha Graham pieces. It was as if watching a movie that starts out as a mood-setting film noir only for it to switch to slapstick humor before concluding back in black and white drama. As such, I felt Graham’s otherwise formidable Cave of the Heart (1946) and thought-provoking anti-war Chronicle (1936) looked unintentionally comedic – not surprising some of the iconic Graham steps elicited giggles among the teenage audience, which is a shame.

Not helping the cause was confusing images in the Chouinard world premiere, Inner Resources, with the all-women cast sporting moustaches/beards and wriggling hands in oversized coats. As a past board director of various nonprofit arts companies, I would say it was a questionable investment for a world premiere. It was with relief then that Duato’s Rust provided the one artfully-crafted contemporary work for the evening.

My cousin from England however liked the show – so perhaps I am too jaded a viewer. Regardless though of my personal perception, the dancers look stronger than the last time I saw them, with Blakeley White-McGuire’s strength and stamina notable.

I have to admit that I would not have attended this performance had a fellow CriticalDance volunteer Cecly Placenti not had a piece on the program. And I also have to share that I did not stay after her work was performed. However, I admire the tenacity of Director Ellen Shadle to create this platform – she calls it an experiment on her website – for local dance practitioners in every genre.

As for the afternoon’s program of world premieres, to be fair, I found the aesthetics of Nicholas Grubbs’s contemporary piece Burnt Toast not to my taste and the execution of Mala Desai’s Sanjeevani not what I’m used to in professional Odissi dance. Six Degrees Dance’s In Your Light was the only work that appealed to me, mainly due to the way choreographer Placenti matches epochal text from Rumi to thought-provoking gestures.

A Jewels program – besides being a balletomane favorite – must also be an ideal evening to introduce newcomers to the artform, with its splendor, majesty and beauty, not to mention its accessibility and satisfying use of some of the best orchestral music in history, by Faure, Stravinsky and Tchaikovsky.

The performances of all three George Balanchine pieces – Emeralds, Rubies and Diamonds – were accomplished in typical NYCB clinical professionalism but it was nice to see the animated sparkle that Megan Fairchild and Gonzalo Garcia brought to the sassy Rubies. 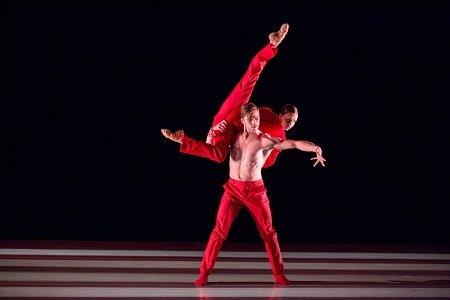 Landing back home, I rushed to Livermore to meet up with my partner for the return to the SF Bay Area of her friends’ company. Aspen Santa Fe Ballet – directed by Tom Mossbrucker and Jean-Philippe “JP” Malaty – is back to the artistic strength befitting their reputation since the last time we saw them, with three very stylish contemporary works by Jorma Elo, Alejandro Cerrudo and Cayetano Soto in a program reminiscent of illustrious internationally-recognized companies like Nederlands Dans Theater and Batsheva, especially Soto’s crowd-pleasing Huma Rojo which uses swing music similar to that of Ohad Naharin’s Minus 16.

Cerrudo’s Silent Ghost, the other ASFB-commissioned work on the program, showcases the collective artistry – and individual personalities, especially Jenelle Figgins – of the company, while 1st Flash by Elo has been well adapted from the original creation for Hubbard Street Dance Chicago. It was also nice to see Sadie Brown having grown in strength since I last saw her at Grand Rapids Ballet – one set of friends was sorry to lose her talents but another has gained it.