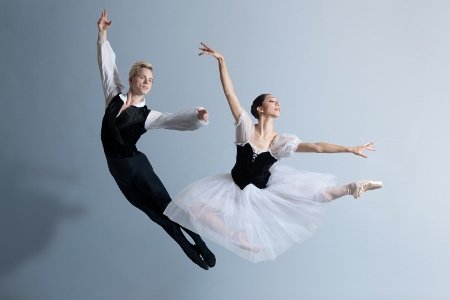 A host of Bay Area dance icons filled the auditorium, signaling that the company holds a significant presence on the arts scene. Each year with this gala, Diablo Ballet hopes that the future will be equally as bright – and its supporters don’t disappoint.

Onstage, the numbers followed each other smoothly. Making a strong showing of not only the company’s talent but also its artful collaboration with local musicians and artists, most of the pieces were performed with live music. Artistic Director Lauren Jonas has built the company’s reputation both on the resurrection of historical material and the fostering of new and innovative pieces. The only low note of the evening was the news that Robert Dekkers could not perform his long-anticipated return to the stage with Pitch Pause Please due to a new injury.

Beyond performing on stage, the company has a strong community connection – their PEEK outreach program has become increasingly successful and each year they celebrate the youth they work with. This year’s PEEK dedication featured a slideshow accompanied live by the four talented young musicians of ‘Minor F’ from the Oakland School for the Arts (Camille Collins on tenor saxophone, Daela Dalzell on Clarinet, Hannah Mayer on piano, Arielle Zakim on Bass). Diablo’s community initiatives highlight the company’s understanding of the ultimate importance of fostering young talent and returning their prosperity to the community that supports its existence.

Tears from Above, a stunning piece by Val Caniparoli, opened the dance portion of the program. Costumed in rust, set against Jack Carpenter’s turquoise lighting design, and accompanied by Joel Cohen and Janet Witharm on the cello, the four performers (Rosselyn Ramirez, Christian Squires, Jackie McConnell, Aidan DeYoung) made the work their own. Steadily improving over the last year, DeYoung gave his best performance to date that this reviewer has witnessed. These dancers are the future of the Diablo Ballet – and that future looked very bright on Thursday.

We, Divine, the film portion of the evening, was a craftsmanlike, fluid movement study that showed off the entire cast to brilliant effect. With cinematography by filmmaker Walter Yamazaki, choreography by Dekkers and costumes by Squires, the piece highlighted the dancers’ sterling grace and athleticism.

Sérénade pour Cordes et Corps saw the accompanists (Philip Santos on violin, Janet Witharm on cello, Katrina Wreede on viola) enter the stage with the dancers and integrated throughout the piece down to the last movement and very last note: a spot on Santos and a final posture for effect. Company member Mayo Sugano made her return to the stage dancing as if she had never been away.

Knowing that this supportive audience deserved to see a good show of the company’s well-rounded skill, the final piece of the evening, La Fille Mal Gardée (choreographed by Jonas after Marius Petipa) elicited the proper audience gasps for this revived classic’s seemingly unending and radiant leaps, lifts and turns. There was much applause for the merry and lively choreography that tested the dancers’ versatility in its combinations – saying much for their strength and for Jonas’ expertise.

Diablo Ballet: Balanchine and Beyond