Diablo Ballet’s 23rd Anniversary performance was a fantastical reverie filled with gaiety, romance and even humor. Artistic director Lauren Jonas continues to curate programs with the impetus that everyone can ‘experience the power of dance’ – even those, she asserts, who do not think they like ballet. And this was a truly celebratory evening.

The program opened with a review of Diablo’s work in the Bay Area community through their PEEK program with photographs by Bilha Sperling and live accompaniment by the extraordinarily talented half-pint-sized ‘Minor F’ Jazz Quartet from Oakland School for the Arts. These four young ladies (whose instruments are just as big as they) are a testament to the caliber of the talent pool that Diablo works with.

The dance portion of the evening then began with Sally Streets’ Three to Tango. The piece, Jonas informed the audience, was particularly dear to her as it was created on her and was her first performance on that very stage. Adding to the piquancy of the piece was Andrea Liquori’s live accompaniment on piano, just as it was originally in 1994. Liquori was joined by Andres Vera on cello, who gave a keen and impassioned performance. As the name implies, the piece is a ‘love triangle’ with all the spicy sensuality of tango with ballet at its core. Waiter Felipe Leon entered dancing solo in a ‘café’ with Jack Carpenter’s vibrant ombré sunset lighting the background. Rosselyn Ramirez and Oliver-Paul Adams join him on stage to complete the trio- and as the intensity increases in the score, Streets’ choreography mirrors the drama of the growing dissonance of the notes. The two men vie for Ramirez’s attentions. All three dancers complimented the musicality of Streets’ choreography well. 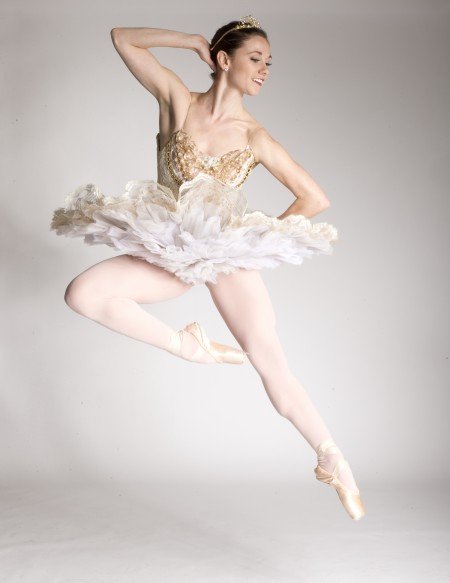 The second piece of the night was the Pas de Deux and Coda from the grand ballet Raymonda (1898, Russia). Jonas’ programming choices often include snippets from similar classical ballets featuring pointe work and turn out, high extensions and gracefulness, and the Diablo dancers transition seamlessly between classical and contemporary pieces. The Raymonda excerpt (staged by Joanna Berman) contained all the obligatory fanfare, pomp, circumstance and drama that drive an audience to immediate uproarious applause. Jackie McConnell was grace itself. Glittery tiaras, beaded bodices, lace and tulle tutus (courtesy of Marin Ballet) and gold/black brocade vests were the peak of fantasy and romance. Alexander Glazunov’s score swelled with emotion, love and longing, playful coquettishness, frivolity and with cymbals crashing brought the audience along to the crescendo. The piece took us out of our humble reality to the height of romance and beauty.

The live performances of the program were punctuated midway through the evening with the world premiere of a film titled Libera by award-winning filmmaker Walter Yamazaki, in collaboration with composer Justin Levitt. Yamazaki also created Aeterna XXI for the company’s 21st Anniversary and We Devine for their 22nd which both featured the athleticism and sinewy grace of Diablo’s dancers. This year’s film introduced the dancers in a far more intimate and personal way- an exploration of identity, of life purpose, of BE-ing, and of dance-ness. 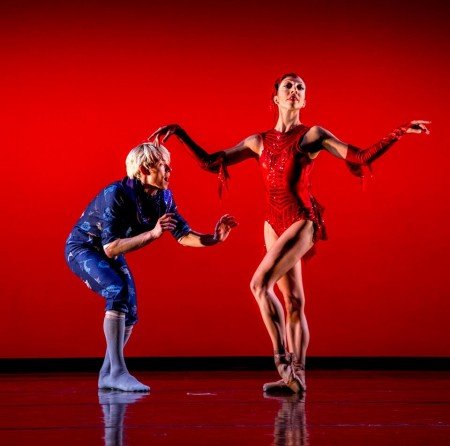 The evening concluded with audience favorite Carnival of the Imagination created by resident choreographer Robert Dekkers. The piece made its Diablo premiere during their 22nd season and continues to be a reminder of Dekkers’ fearlessness in the face of creative genesis. Carnival is the total joyous abandon of artistic barriers and brings out the freshness and originality that can only come with a childlike sense of awe for the world. As Aristotle so aptly stated: “There was never a genius without a tincture of madness.” Carnival is the journey of a young boy ‘Seven’ (Christian Squires) accompanied by his mischievous imaginary friend Pippas (McConnell) as they meet an entire menagerie of fantastical beings. The whole company participates playing over a dozen parts with some thirty different costumes. The costuming warrants more than just a passing mention as Squires’ designs completed the dreamscape ranging from the oh-so-glittery ‘Pheonix’ feathers to fiber optic gowns for the ‘Constellations’ that elicited unabashed ooos and aaahs from the audience. Carpenter’s lighting design aided in indulging our inner child with beautiful splashes and plays of light cast across the stage. The audience was swept away in the story by the dancers’ seemingly effortless execution of Dekkers’ choreography.

Jonas’ well-curated mixed repertory programs continue to artfully showcase the top-notch skills of each of the dancers in this relatively small company. Her artistic sensibilities are at the core of Diablo’s continuing success. The company proves over and over that their dancers and programs are world-class.