Diablo Ballet’s 24th Anniversary gala at the Lesher Center for the Arts, was a choreographic tapas of delicious, bite-sized samplings of the company’s diverse offerings and capabilities. The dancers were at their peak. For a company to go from organic, free-flowing contemporary pieces created by top modern choreographers such as Trey McIntyre to the simple elegance of the long-loved classical ballet Swan Lake with equal skill and precision requires a special breed of dancer with experience and maturity. This Diablo Ballet program clearly demonstrates that it is a company that nurtures and produces that breed of dancer. 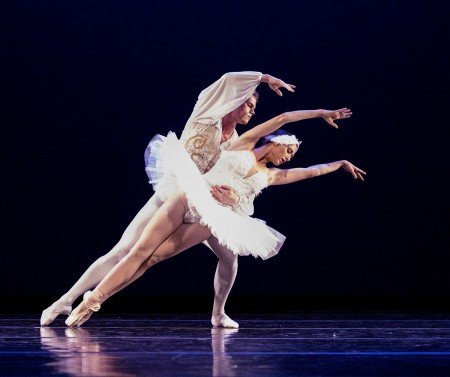 The evening opened with a dedication and visual slideshow of highlights from Diablo Ballet’s PEEK (Performing Arts Education & Enrichment for Kids) outreach program, accompanied by a live rendition of All You Need is Love, arranged by Hannah Mayer, and played live by Minor F, a local jazz quartet from the Oakland School of the Arts. 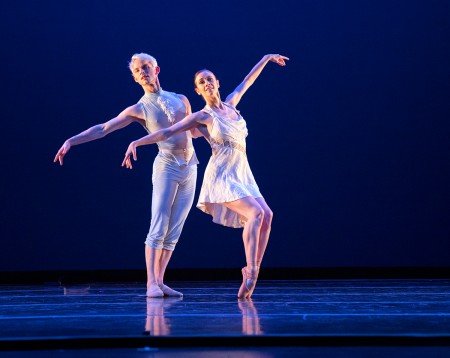 The dark silhouette of a male figure set against a brilliant blue background was a fitting opening for Trey McIntyre’s The Blue Boy, inspired by Rococo artist Thomas Gainsborough’s iconic portrait. Set to Beethoven’s Piano Concerto No. 1 in C minor, the dynamic interplay between Christian Squires and fellow dancers Amanda Farris and Jackie McConnell cast a new twist on unobtainable love, with The Blue Boy as the evasive figure exploring flirtations with two very different types of women. Farris’ long, flowing costume echoed her flowing, lyrical movements, while McConnell exuded strength and lightness in her allegro, which showed off her lovely lines. Squires was equally at ease moving in and out of lifts and sculptural tableaux with both women, and there were some lovely, whimsical moments before the final vision which circled back around to end with The Blue Boy in solitary silhouette.

The mood was dramatically different for Marina Eglevsky’s Solas, with live trumpet and cello musical accompaniment. Originally set on Eglevsky at the Royal Winnipeg Ballet and later on Diablo Ballet’s Artistic Director Lauren Jonas 20 years ago, the piece is dramatic and somber. Clad head to toe in black and shrouded in shadow, Rosselyn Ramirez gave a powerfully emotional performance of a widow’s grief. Using a chair as both a seat and a partner, Ramirez rose up only to tumble to the ground, the pain and raw emotion evident in the intensity of the expressions on her face and the force of her movements, as she rode the wave of the stages of grief. 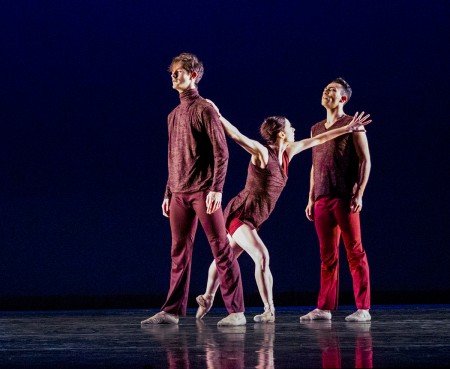 Sonya Delwaide’s Trait d’union, set to Gabriel Faure’s élégie, interlinked the two male figures of Alex McLeery and Felipe Leon for better or worse. As they pushed and pulled one another in and out of various configurations, McConnell’s sole female figure bourrées across the stage behind them like a fairy, as she wove herself into the scene of the warring duo. The earthy tones of the costumes paired well with the organic nature of the choreography with its ingenious methods of moving in and out of shapes, most notably when McConnell placed her heels on Leon’s shoulders and arched her body into a bridge above the two men. Her presence introduces a bit of brevity that changes the two men for the better.

Robert Dekkers’ Sixes and Seven was one of the highlights of the evening. The technical intricacies of this piece, with its impossible abstract shapes, and prolonged balances demand herculean strength and pinpoint precision, and Squires, who danced this solo, demonstrated both with fluidity and ease. His otherworldly, elfin look, mirrored by the musical selection with its electronic undertones and layered spoken word, belies the power required to own this choreography, which he did, flawlessly.

The world premiere of Spiritus, Walter Yamazaki’s newest film, featuring the full company, was a treat and a welcome interlude before the finale. The film begins with a surreal montage of fabric-wrapped floating dancers underwater, until a dancer’s hand reaches toward the surface and the scene shifts. Dancers burst into life on stage, dancing in an empty theater, spotlights blazing all around them. The energy of the dancers is infectious, until the film comes full circle with an ending underwater scene. 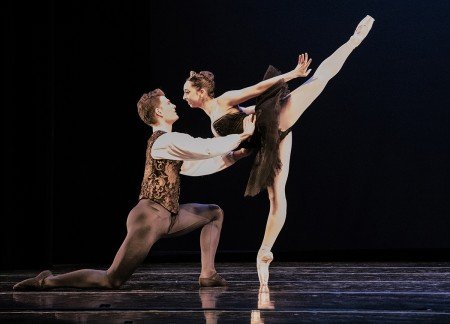 A suite from Swan Lake, featuring different dancers for the White Swan Pas de Deux and the Black Swan Pas de Deux, brought the evening to a novel and creative close.. Larissa Kogut was every bit believable as a swanlike female in the White Swan Pas de Deux; the subtle nuances of gestures she chose brought the swan in her alive. She and her partner, Michael Wells, were elegant and precise in their execution of this timeless choreography. Real-life married duo Raymond and Jordan Tilton, were a lovely contrast in their Black Swan Pas de Deux. Ms. Tilton was bold and sassy as the Black Swan, demonstrating great power during tricky turning sequences, while Mr. Tilton exhibited effortless ease and incredible ballon, especially during a long series of double tours en l’air. Both of the women are blessed with incredible legs and feet, enough so that the war between Black Swan and White Swan was a draw.

During the final moments of the coda, the full company danced together, the women in black tutus, the men in black tights and black brocade vests. It was a festive, light-hearted close to a rich, full evening.