February 1, 2019
Balanchine and Beyond: Apollo, From Another Time, Paquita

For its second show of Diablo Ballet’s 25th Anniversary season, creative director Lauren Jonas combined pieces that embraced storytelling in three very different ways. Opening the evening was Apollo, one of George Balanchine’s most famous pieces. Set to Igor Stravinsky’s music, the ballet premiered in 1928 and its success propelled Balanchine to international recognition. Apollo has been performed a number of times by Diablo over the years (since the Diablo Premier in 1998) with permissions from the George Balanchine Trust and in accordance with its rigorous standards. 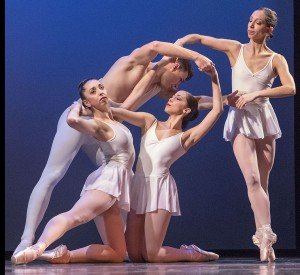 Balanchine’s choreography explores not only classical storytelling, but the classical sense of harmony, balance, and symmetry. Apollo’s three muses (Terpsichore, Polyhymnia, and Calliope) were danced elegantly by Jackie McConnell (replacing injured Jordan Tilton), Rosselyn Ramirez and Amanda Farris. Balanchine employs the muses to create a series of memorable tableau around the young god in their neo-classical, monochromatic costumes (designed by Coco Chanel) like a series of figures on a Grecian frieze. The minimalism of their costumes and the stage, with only a single stool for Apollo to sit on, draws the audience’s focus instead to the sculptured beauty of their bodies as they create moments like the sunburst pose, their legs fanning out behind Apollo.

One of the most impressive, and arguably challenging, male roles Balanchine created, Apollo demands a performance of intensity, sensitivity, and purity that must be approach with vigor. While Diablo has cast the role to a tee in the past, Raymond Tilton, while proficiently executing the choreography, lacked some of the spirit and depth of past Apollos. From its historic prestige, to the number of renowned dancers who have taken on Apollo as their own, the role is a heavy weight to bear. Tilton’s boy-next-door looks lent themselves well to the audience’s understanding of the youthful and naive god as he begins his transformation. Perhaps with time, Tilton will be able to more effectively connect with, and embody the image of the mature man-god ready to take up his place at Zeus’s side on Olympus. 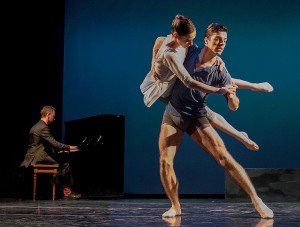 The second piece of the evening from Choreographer and Diablo Ballet alumna Tina Kay Bohnstedt transported the audience to a dream world. Bohnstedt’s choreography in From Another Time, a commissioned piece for Diablo, was in large part inspired by the original piano score by Justin Levitt (who played on stage with the dancers). The sometimes melancholic, sometimes hopeful melody made Bohnstedt think of a day dream, or being in another place or time.

With a simple set consisting only of two rectangular boxes and a piano, the five dancers dressed in plain grey cotton swept the audience away to the dream-like state expressed by Levitt’s notes. Rather than following a linear narrative, Bohnstadt is able to tell a light and refreshing story through expressed emotion. A truly beautiful and unassuming piece, Bohnstedt and Levitt are a well matched pair, their choreography and music harmonizing together like the perfect intermezzo.

For the finale of the evening, Jonas chose the high spirited Paquita with a score by Ludwig Minkus. The selection was enjoyable for its exuberance alone, even without knowledge of the ballet’s actual plot: a Spanish gypsy girl saves the life of a French officer, and it turns out she is of noble birth and the two are able to be married. Marius Petipa’s choreography is filled with lively leaps, stage-devouring turns, ever-changing speed and accent which create a ballet full of thrilling movement and detail.

Pulling together selections including the Pax de Deux, solo variations, and featuring the entire company in the Finale, Jonas proved once again that she can artfully set the stage for the dancers to show the life of the choreography. Jillian Transon was elegant and charming, the image of a fairytale princess in a red and white tutu. McConnell, Ramirez and Transon shone in the variations, and Jocopo Jannelli stole the hearts of the audience. With Jonas continuing to bring on talented new faces like Jannelli, this reviewer is looking forward to watching them grow with the company. The evening was enjoyable as ever, a few minor glitches with the sound system cutting out and inconsistencies in volume luckily did not go so far as to hinder the overall experience. The dancers brought pleasure and delight to their target audience with this series of vignettes.