Artists can’t help but become reflections of the times, and Diablo Ballet’s “Body and Soul” program was a poetic ensemble of dances that sensitively embodied the many questions of the human condition befitting our time. The evening took the audience on a journey underscored by inquisitive intensity and punctuated with moments of lighthearted reprieve. 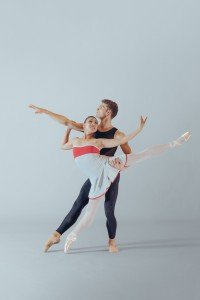 The evening began with a highly polished execution by Mayo Sugano and Raymond Tilton (accompanied live by pianist Aileen Chanco) of the complex stage geometries of the pas de deux from Mercurial Manoeuvres. The choreography by celebrated ballet and Broadway choreographer Christopher Wheeldon makes both dancers look lovely.

The world premiere of a new work, Trait d’union, by award-winning Canadian choreographer Sonya Delwaide, with Janet Witharm on cello and Chanco on piano, was the highlight of the show.

Delwaide explained that she wanted to explore the question “Why do differences have so much more power than our similarities?” and that she wanted to give a “Glimpse at what we have in common […] to give that power […] through the body.” Her choreography embodied a sense of tension and release – quick intense movements followed by smooth and precise progressions. The demure costuming was understated and reserved, providing focus instead to the journey of the dancers. Amanda Farris veritably floated in from stage left with a well-timed tempo change in the score. 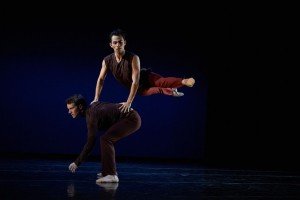 Delwaide’s work puts in mind the innocent poignancy of the words written by author Shel Silverstein:

“Small as a peanut,
Big as a giant,
We’re all the same size
When we turn off the light

Rich as a sultan,
Poor as a mite,
We’re all worth the same
When we turn off the light.

Red, black or orange,
Yellow or white,
We all look the same
When we turn off the light.

So maybe the way
To make everything right
Is for God to just reach out
And turn off the light!” 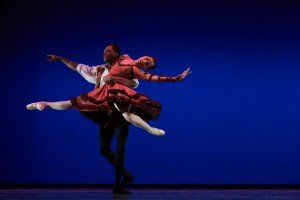 The 2nd Act pas de deux from Don Quixote staged by Lauren Jonas was charming, romantic, and endearing. The costumes were just right, and Jamar Goodman was a cheeky, gallant, and delightful counterpart to the graceful and frolicsome Rosselyn Ramirez. Despite a momentary technical glitch with the music, the couple didn’t skip a beat, reflecting the company’s ever-present professionalism.

Wrapping up the evening was the Diablo Ballet premiere of Robert Dekkers’ When in Doubt — a challenging and skillful piece. Opening with a quote from Bertrand Russell (referenced below), the dancers’ voices are interwoven thereafter into the commissioned score by Jacob Wolkenhauer as they express their feelings of vulnerability, insecurity, and doubt.

“I should say love is wise, hatred is foolish. In this world which is getting more closely and closely interconnected we have to learn to tolerate each other, we have to learn to put up with the fact that some people say things that we don’t like. We can only live together in that way and if we are to live together and not die together we must learn a kind of charity and a kind of tolerance which is absolutely vital to the continuation of human life on this planet.” 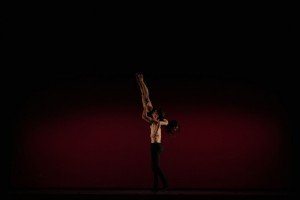 In the post-performance talk-back, Wolkenhauer and Dekkers explained that each time the piece is performed the voices that become intertwined with the existing score are those of the dancers performing it, resulting in a different impact with each change in cast.. This concept of impermanence adds a layer of complexity and a welcome sense ofimperfection that is embraced even in Dekkers’ abandonment of the use of counts for movements throughout the piece. Tilton, Felipe Leon, and Oliver-Paul Adams perform in delicate balance with the music leading and following one another. While the choreography is often disparate from the score, there are moments of release and certainty when motion and composition seem to meld and make sense again bringing a harmony between preservation and decay.

Dekkers and Wolkenhauer remind us that nothing is timeless – enshrouding dance with a sense of immortality is an illusion. Each time a piece is performed the dancer(s) brings a bit of themselves to the choreography. Therefore even a classical piece will always be impermanent, imperfect and incomplete. By ignoring perfection and embracing all that is “worn or asymmetrical”, we can begin to see the world differently.