The premiere of Gary Masters’ (founder and Co-Artistic Director of sjDANCEco and Isadora Duncan Dance Award winner) Mythic Place opened the finale show of Diablo’s 22nd season. Set to a percussion score by Carlos Chavez, arranged and performed onstage by Greg Sudmeier, Masters explained in the post-show talk-back that the challenging piece was inspired by travels to Mexico, Maccupiccu, and the Caribbean, the real and the mythic, and the legendary. With a myriad of moving parts, Masters’ choreography had each of the five dancers performing to his or her own cadence set against the sixth player – the asynchronous percussion. Costumed in minimal yet colorful leotards, the piece had a driving vibrancy. 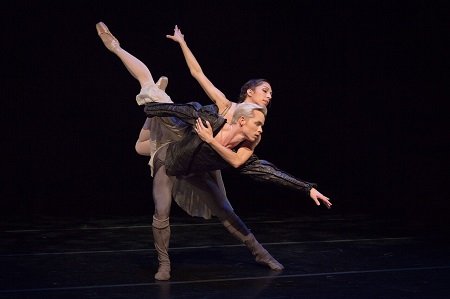 Punctuating the middle portion of the evening was the ever-dramatic Hamlet and Ophelia choreographed by legend Val Caniparoli. Also performed at last year’s 21st anniversary show at the Walnut Creek Lesher Center, Christian Squires and Amanda Farris once again took the stage in a command performance of the tragic couple. The expressive and passionate pas de deux is Caniparoli’s ode to Ophelia. With the challenge of encapsulating an entire Shakespearean tragedy in to 10 minutes of choreography, Caniparoli presents Ophelia’s descent into madness as Hamlet torments her. The piece closes as Hamlet walks upstage, his cloak transforming into a river where Ophelia’s drowned body ‘floats.’

The show culminated in the premiere of a spectacularly vibrant and whimsical new work from resident choreographer Robert Dekkers: Carnival of the Imagination set to Camille Saint-Saëns’ ‘The Carnival of the Animals.’

Carnival took full advantage of the dancers’ seemingly untiring locomotion, their surprising power of movement, and the sublime spark of life with which they all seem imbued. Dekkers created the ‘coming of age’ story with his nephew (‘Seven,’ as performed by Squires) in mind. With his faithful companion and imaginary friend “Pippas” (Jackie McConnell) at his side, Seven encounters an entire cast of fantastical characters. From facing fears manifested as a dragon and shadow, to experiencing the beautiful and sublime – a majestic unicorn (performed by the statuesque Tetyana Martyanova), a butterfly emerging with ephemeral wings, and even a group of  swirling constellations, the audience is carried along Seven’s imaginary ‘hero’s journey.’ 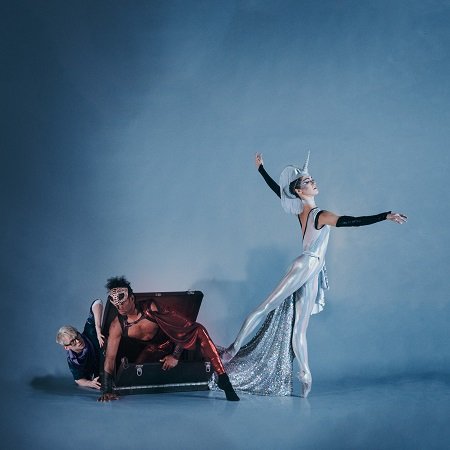 Squires once again displayed his talent not only as one of the company’s strongest dancers, but as a designer. Creating nearly thirty unique costumes for Carnival – dazzling, glittering, opal, and occasionally phosphorescent – Squires was even able to intelligently integrated fiber optics in to some of his garments (to invoke constellations). His careful use of technology to enhance the driving concepts behind Dekkers’ choreography and story-telling was a profound relief (and quite successful) when so many companies mistakenly employ it merely for its novelty. His costumes added life and just the right amount of joie de vivre to Dekkers’ movements, maneuvering the piece to an uncommon plane of enjoyment and glee.

Dekkers’ work embodies the exploratory and exuberant attitude that is taking place in the Bay Area – right alongside contemporaries such as San Francisco Ballet resident choreographer Yuri Possokhov (“Swimmer” and ‘’Magrittomania’). An all-around triumph, Dekkers’ pieces prove over and over to be a magical phenomenon, which doubtless no one in attendance will soon forget.