From 17th century portraits and pet roosters, to retro-futurism and MC Hammer pants, Diablo Ballet’s final program of their 23rd season was filled with a myriad of inspiration and muse. An evening of unexpected themes set in a small space, the show was as much about the stories behind the choreography as it was the performance itself. 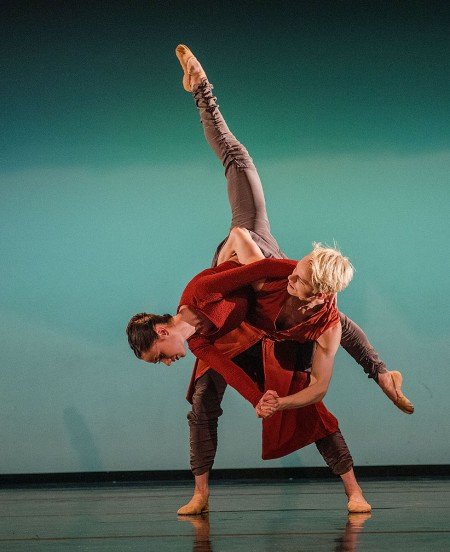 The evening kicked-off with Gustav’s Rooster by master choreographer Val Caniparoli. Embodying the folksy roots of Swedish rock band Hoven Droven’s music, Caniparoli based his entire piece around one of the band’s albums and the pet rooster featured therein. The story goes that after Tulsa Ballet premiered Caniparoli’s piece in 2003, he sent a video to the band who responded that they loved the piece, but that the whole rooster as Gustav’s pet was all a fiction for the album, a joke. The choreographer apparently took it in his stride saying, “I love that I choreographed a dance based on a joke. What a great name!“ Jackie McConnell and Christian Squires were sprightly and sharp. The costuming and adroit, but light-hearted technicality of Caniparoli’s piece was a winsome and delightful way to start the show.

The second piece of the evening, Trey McIntyre’s The Blue Boy, performed by Oliver-Paul Adams, Amanda Ferris and Larissa Kogut (in place of injured Rosselyn Ramirez) was stately and dignified. Inspired by Gainsborough’s ‘The Blue Boy’ (c 1770), the piece opens with dramatic blue lighting (Nicholas Phillips) and Adams posed with a large feathered hat – a tableau of Gainsborough’s painting. Farris’ stunning cobalt satin skirt twirled through Adams’ lifts. Liz Prince’s refined costumes were reminiscent of Gainsborough’s use of rich blue tints which he layered on the canvas with energetic slashes and delicate strokes to render the shimmering blue satin of the boy’s knee breeches and a slashed doublet (the dramatic feature that made the painting an immediate success).

The second half of the show featured the world premiere of resident choreographer Robert Dekkers’ newest work, From: Now On. A moody piece set to live original music performed by composer Dennis Aman and members of the “electro-acoustic chamber music ensemble”, The Living Earth Show, the costuming and lighting design were a captivating retro-futuristic disco. As one audience member commented, Jack Carpenter’s intense lighting (fluorescent tubes hung vertically across the back of the stage) was reminiscent of the interior of the Tardis (the time traveling space ship from the Doctor Who sci-fi series). With a surprisingly modest budget and relatively small stage, Carpenter was able to transform the Del Valle theater space with cunning skill. 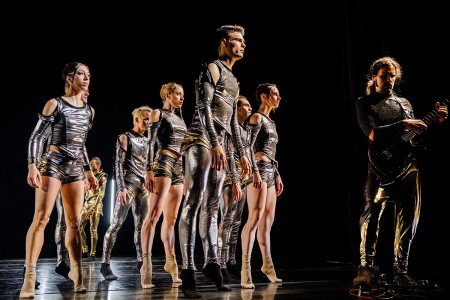 The piece is arguably more about the artistic process than the final product, but in part, the audience’s enjoyment (and intrigue), was due to this factor. Even the musicians were bedecked in metallic MC Hammer-esque pants and at times were more mesmerizing to watch in their music-making than the choreography occurring adjacent. Jamar Goodman deftly made a 20 minute slow-motion ‘moon walk’ across the entire length of the stage as the other dancers swirled in and around him like electrons activating a Theremin*, which was cleverly concealed within the gold lycra exo-skeletal pauldron (large shoulder piece resembling space-age football pads) of Goodman’s costume (designed by Squires).

All in all, the evening left the audience [intrigued], perhaps somewhat mystified, and definitely wanting more.

*The Theremin (patented by Russian Léon Theremin in 1928) is played without any actual physical contact by the musician. Its proximity-induced sounds are generally associated with eerie or otherworldly situations, and lent the piece an additional layer of complexity and mystery.