As Diablo Ballet’s 25th Anniversary season drew to a close, a trio of pieces from three distinctive choreographers graced the stage at Del Valle Theater in Walnut Creek. A conversation on movement vocabulary over time, each of these choreographers has had a dialogue with hundreds of years of movement tradition: from the classical works of Petipa, to the increasingly progressive and experimental works of Val Caniparoli and KT Nelson. Since its early origins in the Italian Renaissance courts of the 15th and 16th centuries, choreographers have added their own unique voices to ballet’s cannon to capture the spirit of their time. Diablo’s Celebrated Masters program took on three distinct points of view. And, like a wine tasting, by watching them one after another, gave us a subtle yet clear sense of the ever-evolving medium of ballet.

Originally created for Diablo Ballet and premiered in 1998, KT Nelson’s opening piece Walk before Talk captured the changing moods of Michael Nyman’s score. Progressing from a solo piano to the rhythmic plodding of a saxophone and increasing in energy to evoke images of the frenetic hustle and bustle of a city street, Nelson’s choreography played on the ebb and flow, rise and fall of Nyman’s pieces. Nelson has explained that “[Today] the ballet world is reimagining what the body can say.” The audience was brought along with the current of the music and the movement, experiencing the cycles of life and relationships suggested therein. While Michael Wells’ performance was unfortunately not his strongest – his hands a slightly limp and noticeable afterthought – in contrast, Raymond Tilton’s performance was a stand-out, his movements crisp, precise and on their mark making the abstract musicality of Nelson’s choreography feel insightful and well-considered. 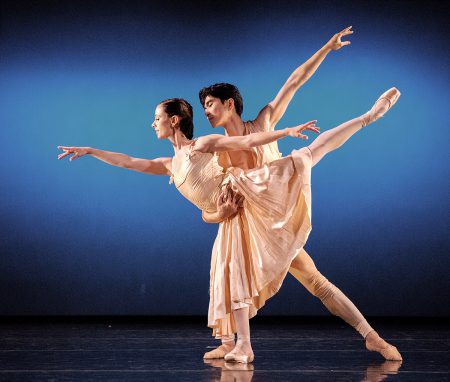 The second piece of the evening was Val Caniparoli’s Tryst. Premiered originally in 1991 for the San Francisco Ballet, Caniparoli’s choreography meshes traditional ballet vocabulary with a fresh, contemporary twist. This romantic pas de deux set to Mozart’s Concerto No. 7 in B flat Major was performed by Jackie McConnell and new company member Donghoon Lee. Lee’s performance was measured, consistent, and delicately emotive with a perceived effortlessness that made the dancing seamless. It can pain an audience to see dancers straining to complete lifts and jumps, but none of that was present with Lee and McConnell. Like the piece’s name implies, the choreography is an expression of two lovers meeting and even the vanilla macaron colored costumes (courtesy San Francisco Ballet) lent to the piece’s dreamy ambiance. Lee and McConnell’s synergistic pairing was a pleasure to observe and Lee solidified his new position in the company. 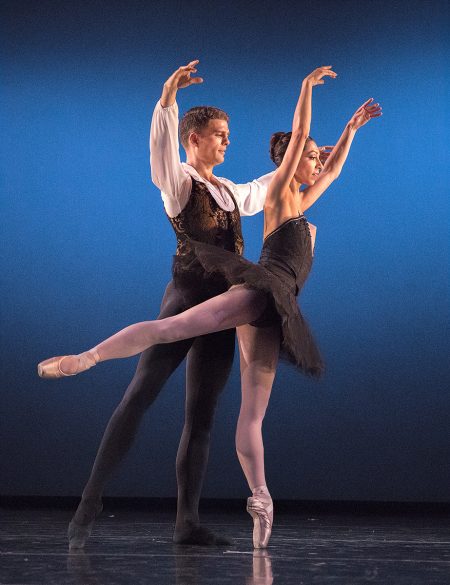 To round out the night, the dancers took the stage for the Swan Lake Suite as choreographed by Marius Petipa in 1895 with music by Tchaikovsky. The embodiment of the Classical style, Petipa’s choreography brought the audience back to ballet’s ‘roots’. Wells and Jillian Transon were an aesthetically well matched pair for the White Swan Pas de Deux, and Transon elicited enthusiastic applause for her performance. Viewed as one of classical ballet’s most iconic moments, Amanda Farris and Tilton performed an excellent interpretation of the challenging Black Swan Pas de Deux. Tilton was markedly at top of his game for this season. With adapted staging from the company’s regisseur (Joanna Berman), the evening concluded with the impressive, and rousing coda.

When attending one of Diablo’s performances, the audience is generally provided with a minimalist, stripped-down version of pieces: there are no opulent sets or back drops, no scores of supporting corps members miming in the background—just the key dancers, the music, and the choreography. This ‘purist’ platform creates laser-focus on the dancing and allows the audience to engage in a unique relationship with both the dancers and the choreography. The company has proven consistently that they have a winning combination of company members, supporters, choreography, and vision from creative director Lauren Jonas. Over the past 25 years, this has allowed them to grow a strong foothold in the community and in doing so, has also given them the opportunity to announce the opening of their new school in Pleasant Hill (expected August 2019).