February 3, 2018
“Harmonious Beauty” Program:
And Here We Are, No Other (Ballroom Pas de Deux from “A Cinderella Story”), Encores, Libera (Film), Millieu

The program opened with the world premier of Danielle Rowe’s And Here We Are. A relative newcomer to the world of choreography, Rowe retired from the contemporary dance company Nederlands Dans Theater in 2015 and began the second phase of her career. And Here We Are is a look at the different stages of a single relationship represented by three couples on stage simultaneously. Fusing a number of different styles including modern and point-work, the piece was created in just three weeks. Though it showed merit based in Rowe’s strong background, ultimately, it still felt raw: pretty movements to pretty music but lacking a bit of the accompanying depth one might expect from the subject matter. The piece’s themes are easily relatable (looking back over life and rough times, wishing we could tell ourselves not to worry so much and that everything will work out fine), but the choreography fell a bit short of capturing the strong emotion Rowe sought to capture. All in all, however, it was a fitting introduction to an evening tinted with romantic and contemplative overtones. 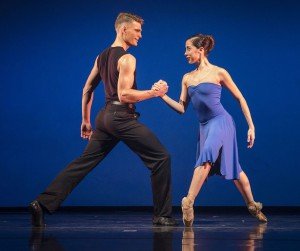 Diablo Ballet dancers
Rosselyn Ramirez and Raymond Tilton
in “No Other,” the Ballroom Pas de Deux
from Val Caniparoli’s
“A Cinderella Story”
Photo by Bilha Sperling

The second piece of the evening, No Other, a Ballroom Pas De Deux with music from Richard Rodgers, was an excerpt from “A Cinderella Story” choreographed by Val Caniparoli. Combining everything from classical point work to swing, ballroom and jazz, this was an apt piece to showcase Diablo’s versatility and technical merit. Reconceiving the classic Cinderella Story, Caniporoli’s choreography embraces the spirit of Rogers’ music and the mid-20th century vibe while creating a “twisted” version of the fairytale. Robert G. De la Rose’s costumes hinted at the classic fairytale image with Cinderella (in this case ‘Nancy’, danced by Rosselyn Ramirez) wearing powder-blue with a gathered sweetheart neckline – though it may be one of the only times we’ve seen a prince without sleeves. Raymond Tilton, in the part of the prince (a.k.a. ‘Bob’), and Ramirez were a well-matched pair for this highly inventive choreography. Ramirez embodied sweetness and Tilton carried an air of dignity. 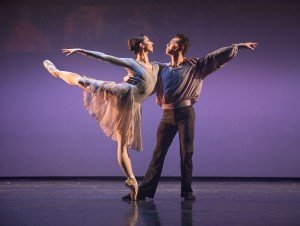 Following Caniparoli’s piece, Sally Streets’ Encores was an exhilarating high-point in the program. Originally created in 1996 for Jonas, her sister Corinne and Karen Portner Lapointe, the piece was accompanied by a recording of superstar violin virtuoso Itzhak Perlman’s thrilling playing with Samual Sanders on piano. The score’s ever-increasing tempo and intensity created a challenging and technically demanding backdrop for the dancers. Streets’ choreography remained grounded and mindful of the music, and Jordan Tilton, Amanda Farris, Michael Wells, and Filipe Leon ably rose to the challenge of keeping up with Perlman. 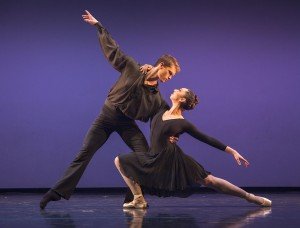 Punctuating the program’s mixed-repertoire was a screening of Walter Yamazaki’s short film Libera which premiered during Diablo Ballet’s 23rd Anniversary performance. Winning several awards over the last year including a Telly Award for Directing and a U.S. Hollywood International Golden Film award for its music (by Justin Levitt), the film explores the complex identity of the dancer. Yamazaki sourced the narration from anonymous interviews with the company members. He explained the he wanted to convey the power within the dancers to influence and touch people. The dancers communicated an undeniable sense of fulfilling their destiny and freedom expressed through their dancing – the piece gets its name from this concept “Libera” (free). Yamazaki captures the dancers’ sinewy grace both in the studio and on a rugged beach highlighting this dichotomy with deft ease.

To close the evening, the company presented resident choreographer Robert Dekkers’ original Milieu. With original score by Daniel Berkman, the piece made its Diablo premier in 2016. Dekkers’ choreography explores the environment in which we exist – the conversation that exists between our character and our context. His organic and somewhat primal movement sequences saw the dancers evolving through a series of morphing dynamics from autonomous to amoebic, an expression of the evolution of relationships. Dekkers’ democratic style of composition gives importance to each dancer based on the underlying concept rather than playing favorites for the sake of showiness. The dancers were accompanied live by Berkman who joined them on stage playing the graceful gravikord (an electric harp-type instrument that Berkman admitted strongly resembles the Bay Bridge). The costumes, designed by company member Christian Squires, were reminiscent of shimmering red animal stripes and were beautifully enhanced by Jack Carpenter’s lighting.

Once again, Jonas adroitly wove an intricate program with works that both examined what has come before and what is becoming. Combining pieces that are not only pleasurable to watch on the most basic level, but also ideologically and thematically complex, Jonas managed to conceive a first-rate program – a skill which has become her badge over the years.