Since its premier in St. Petersburg in 1892 The Nutcracker has become a holiday staple for ballet companies all over the world; it’s only fitting that Diablo Ballet would want to bring that festive magic to the East Bay community. However, the question of how to reimagine a production that normally requires armies of soldiers, mice, snowflakes, and other fantastical dancers on a chamber-sized ballet company required innovative thinking, so Artistic Director Lauren Jonas turned to world-renowned choreographer Julia Adam. The result: The Nutcracker Suite, a 25-minute abbreviated version of the ballet, with a storyline that has the Diablo Family checking into a hotel suite to ring in the holiday together. 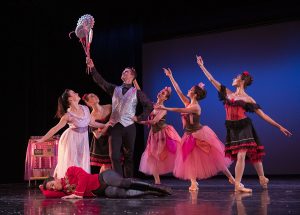 This short and sweet Suite blends tradition with a modern twist, weaving mid-century ‘50s sensibility through all elements of the production, from costumes to choreography. Some things about the ballet are immediately familiar. The music, of course, and the opening scene, where 4 maids prepare the space for holiday festivities while the Diablo Family, dressed in their holiday finery, slowly makes their way to their final destination. Other things are not so familiar: Clara wears a poodle skirt, the family checks into a suite at the iconic Fairmont Hotel, and many of the characters metamorphose (including Fritz, who becomes the Rat King, and Auntie Diablo, who becomes the Snow Queen).

From the very start there are hints of things to come, beginning with the opening scene, where the maids dance together in a formation that evokes the four little swans from Swan Lake. When the family arrives at the hotel, Auntie Diablo’s fascinator sparkles with otherworldly splendor, Michael Wells as the hotel Concierge acts with typical Drosselmeyer bravado, and Roberto Vega-Ortiz as the Bell Hop/Nutboy catches the eye of young Clara, danced by Olivia Powell, from the get-go. 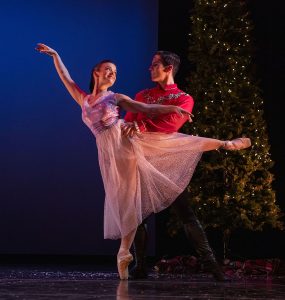 The complete transformation is set in motion once the family is settled into the hotel suite. Mr. Diablo, danced by Raymond Tilton, turns on the radio and slow dances with his wife. Soon everyone grabs a partner; Clara goes straight to the Bell Hop, the maids pair off and dance together. Drosselmeyer sprinkles everything liberally with magic dust, then lifts the maids high overhead, and sends them off giggling as they run to unveil the magical world that awaits.

The Nutcracker Suite really shines once the magical realm is revealed. A hilarious rendition of the fight scene between Fritz–now the Rat King (danced by Donghoon Lee)–and the Nutboy, with Clara and Drosselmeyer as onlookers, cleverly weaves the four characters in and out of comic antics and poses that were reminiscent of Charlie Chaplin slapstick. The powerful, graceful pas de deux with Clara and the Nutboy that follows is classically romantic; they waltz around the stage–and tour the world together–as indicated by dancers tiptoeing across the stage carrying signs that read, “Venice,” “Paris” and finally, “Mt. Diablo,” just to keep things real for the locals. 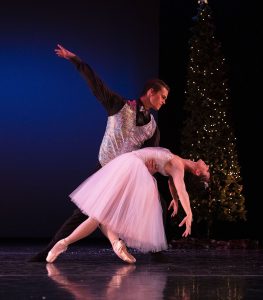 The Land of Sweets is introduced with a flourish by the arrival of the Sugar Plum, Rosselyn Ramirez, and her Cavalier,Tilton. Ramirez was a delectable treat; radiant and regal, in what was her farewell performance with Diablo Ballet. Other bite-sized dance delicacies included the maids, now transformed into a Spanish-style duo and a candy cane duo. Amanda Farris as the Snow Queen rounded out the offerings from the Land of Sweets. Adam’s affinity for the 1950s is very apparent in the choreography for both the Sugar Plum and Snow pas de deux; their flowing gowns and sweeping waltzes had the elegance and flair of classic Fred Astaire and Ginger Rogers duets.

The closing scene neatly wraps things up as we return to the real world. Drosselmeyer quietly disappears under a curtain, while the Bell Hop swirls Clara around and around on a luggage trolley.

The Nutcracker Suite is a satisfying holiday treat with just the right amount of necessary ingredients to satisfy rabid Nutcracker fans while providing tantalizing new tastes to keep things fresh. Its abbreviated, bite-sized length makes it especially friendly for families with young children, with the elegance and humor that will appeal to all ages.