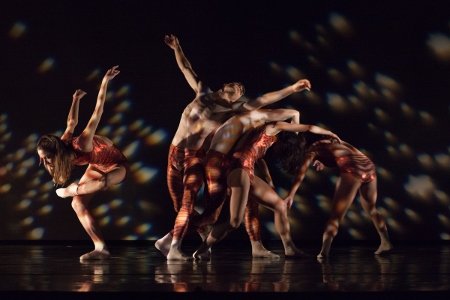 Diablo Ballet’s Precision and Balance was in many ways an evening in celebration of the male dancer. Two of the three pieces put the company’s male members front and center – George Balanchine’s Apollo and company alumna Tina Kay Bohnstedt’s My Way, set to Frank Sinatra.

Balanchine’s Apollo is one of a few ballets that highlights the male dancer. In 2015, Diablo presented the pas de deux for their 21st Season Anniversary show, and seeing the ballet in its entirety as performed by Christian Squires (Apollo), Tetyana Martyanova (Calliope), Rosselyn Ramirez (Polyhymnia), and Amanda Farris (Terpsichore) this season was a treat. Co-founder and Artistic Director Lauren Jonas pulls in some heavy hitters – working with great stars like Joanna Berman and, for this performance, Christopher Stowell as the choreologist. Stowell who comes from a dance legacy – his mother worked directly with Balanchine and was one of the first members George Balanchine Trust repetiteurs. Not every company gets to perform a Balanchine, and it speaks to the caliber of the company that they have had the privilege of presenting the entirety of what many consider his “neoclassical masterpiece”.

Even at its 1928 premier in Paris, it was a great success as part of Serge Diaghilev’s Ballets Russes. The company collaborated with a variety of contemporary artists like Coco Chanel, and Pablo Picasso. Diablo utilized the Chanel designed costumes for their presentation of the ballet, the dancers styled in minimal white. As an artist’s work is rarely truly finished, Balanchine continued to revise the work throughout his lifetime, eliminating sets, costumes, and much of the ballet’s narrative content.

“Apollo I look back on as the turning point of my life. In its discipline and restraint, in its sustained oneness of tone and feeling, the score was a revelation. It seemed to tell me that I could dare not to use everything, that I, too, could eliminate.”

The second piece of the night, choreographed by alumnus Tina Kay Bohstedt, again put Diablo’s male talent at the forefront. The duet, danced by the well matched Jamar Goodman and Raymond Tilton, and accompanied live by Janet Witharm on cello and Aileen Chanco on piano, was presented on a bare stage (save for the musicians), the danseurs in simple black shirt and slacks (costuming by Amanda Williams). Par usual, Diablo struck a balance between the classical and contemporary throughout their program as well as fostering talent from within their ranks.

To close the evening, the company presented yet another Dekkers original: Milieu with original score by Daniel Berkman. Unfortunately the audience missed out on viewing the live performance of the accompaniment due to a curtain malfunction but were only made aware of the mistake during the post-show question and answer session. Berkman and Dekkers discussed their creative process and showed off the elegant gravikord (essentially an electric harp roughly the size of a guitar) on which the score was played. The score and the choreography both explore the idea of the piece’s namesake, ‘milieu’: the look and feel, the mood and character, the style of a place, a social environment. With Dekkers’ choreography punctuated with stunning costumes by multi-talented company member Christian Squires and lighting recreated by Jack Carpenter, the piece came together with great harmony. The red iridescent stripes of the costumes caught in the dappled light – much like the sun filtering through a forest tree canopy — added another layer of richness to the dancers’ movements. Milieu left the audience on an extreme high and lobby was filled with the audience’s praise after the show.