Any program that includes just about any dance by George Balanchine deserves our time and attention, and what a great way to kick off Diablo Ballet’s Winter Program with his Tchaikovsky Pas de Deux. Neatly and warmly danced by company members Olivia Powell and Walker Martin, this staging by Sandra Jennings was a hit and a welcome introduction and lead into the rest of the program. 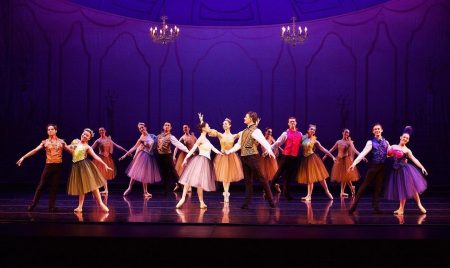 First performed by New York City Ballet in 1960, danced by Violette Verdy and Conrad Ludlow, Tchaikovsky Pas de Deux received its Diablo Ballet premiere during this run. Its structure follows that of a typical classical duet — an entree, followed by the actual adagio, then a solo for each of the couple, then a zippy coda. Each section is executed with great sunny cheer and aplomb and nerves of steel for the leap into the man’s awaiting arms that’s unique to the coda and this daring duet. It’s VERY exciting and thrilling.

Martin used his long lines to great effect, which included the usual male fare — tours, beats, and big leaps, sometimes with these elements combined. The female gets to do a very quick (and short) allegro solo and Powell did it so cleanly and well, including 11 (at least how I counted) of the very quick 12 hops (think chugging backward) in arabesque. I’ve seen some dancers not able to get these even close to all in, I and was pleased to see Powell’s neat rendition done so effortlessly. 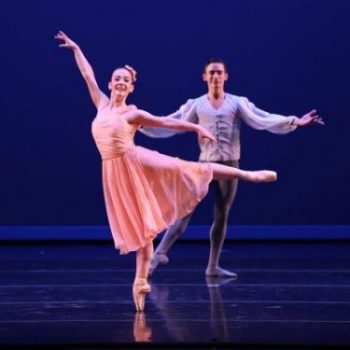 For his Wayfaring Pilgrim, choreographer Michael Wells was drawn to music of the Deep South (Mississippi). If I had to categorize his movement palette here, I’d say it was along the lines of contemporary, undergirded with the dancers’ ballet training. A sense of the bittersweet, aka the Blues, permeated throughout. The large cast included Jordan Tilton, Felipe Leon, Jackie McConnell, Raymond Tilton, Danielle Troyano, Lucas Tischler, Julia Meister, Natalie Roy, and Alina Gonzalez.

Val Caniparoli is a choreographer/dancer who I’ve long admired — he always produces solid works, and I enjoyed his duet, She’s So Fine (from his Book of Alleged Dances), to music by John Adams from Adams’s suite “John’s Book of Alleged Dances,” and staged here by Joanna Berman. While the program notes quote Caniparoli as stating that “Being from San Francisco, I took my inspiration from the score,” and while this is currently his home base, I note that he’s originally from Renton, Washington but has made his artistic home at the San Francisco Ballet for over 43 years, a remarkable record. Here, the movement motif shown by the dancers in this duet, Amanda Farris and Michael Wells, was along the ’60s “feeling groovy” side, beginning with the dancers rocking forward and back on their heels and swinging their arms with closed/clutched palms and a look of satisfaction on their visages. This then built into a classical duet and then returned to the “tonic chord” of feeling groovy. 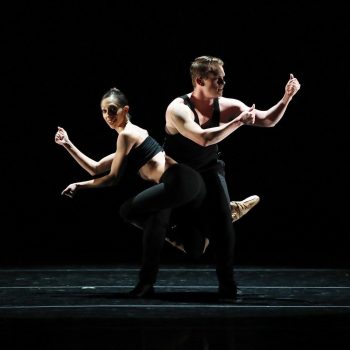 Canadian choreographer Julia Adam seems to be carving out a career for herself as a maker of “Reader’s Digest” editions of classic story ballets, here with a one-act Cinderella’s Wedding, with the characters we love to enjoy but condensed into one, longer scene. Adam does some very clever things, such as when the Prince (Tilton) and his helper (Leon) search the kingdom for the one who fits into the lost glass slipper, she has dancers stick their feet up from behind/under a black curtain as each tries it on. Also fresh was having Stepbrothers, rather than Stepsisters, and Wells and Martin were a total riot in these roles.  Also a hoot was Powell’s Stepmother, who does her level best to ingratiate herself into the Prince’s good graces but humorously fails. The title character was danced by a pliant McConnell. 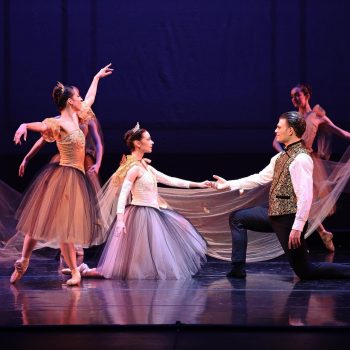 For me, one of the highlights of any version of this ballet are the fairies, and Adam’s choreography for each of the seasons’ fairies was true and well-done: Tischler (Autumn); Troyano (Winter); Meister (Spring); and Tilton (Summer).

Cinderella’s Wedding is an excellent addition to Diablo Ballet’s repertory. This mixed bill program really “put a little love in our hearts.” Lauren Jonas, its Artistic Director, continues to make mindful and good selections and programming for this mid-sized company, now in its 28th year — a very notable achievement.

Coming up – Diablo Ballet’s Gala in April and Coppelia in May.