A Romantic Ode to the Holiday Season 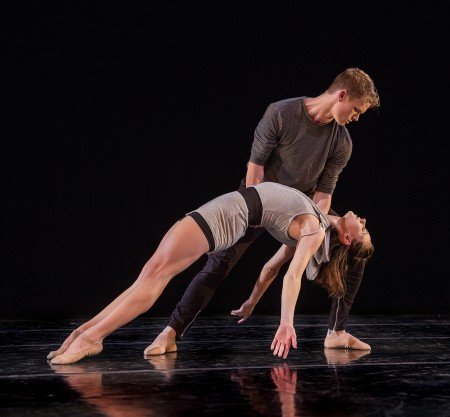 Opening the show was the Diablo premiere of Robert Dekkers’ No One Does it Like You. Danced by Rosselyn Ramirez and Alexander McCleery, it explored the ups and downs of a relationship. The choreography deftly demonstrated how body language can speak volumes and how one can feel alone even while with someone. Beginning with melancholy overtones with twisted movements contrasting between hard and fluid, the narrative transitioned to a more upbeat, faster tempo with a playful, flirty, “La La Land” feel, the couple ‘walking off in to the sunset’ at the close.

The minimal set consisted simply of a paint-splashed drop cloth and a ladder used at key moments in the choreography. Dekkers’ work is most successful when it focuses on the exploration of intimate human themes rather than on pure experimentation (as seen in his piece From: Now On performed in Diablo’s 23rd season). No One Does it Like You was an artful example of Dekkers’ ability to create a sense of emotional connection and authenticity through his dance narratives. He often imbues his productions with a sense of nostalgia and upon occasion, a single moment will suddenly create a personal connection with each audience member.

Dekkers’ strength lies in his ability to meld choreography with the human condition, however, there were some moments of this work that were a bit on the nose. At one point the dancers mime the literal lifting of one another up during the transition to the second half, but overall, the progression worked. Ramirez’s costume, unfortunately, was not particularly flattering: a grey jersey romper with what looked like bike shorts underneath. There is nothing conceptually objectionable to the costuming taking on a more ‘street wear’ tone, but from a fashion standpoint, the clothes should not minimize the lithe, athletic bodies of the dancers. On a high note, Dekkers proved again that he consistently chooses poignant musical accompaniment that pairs well with the strong themes his work tends to explore. 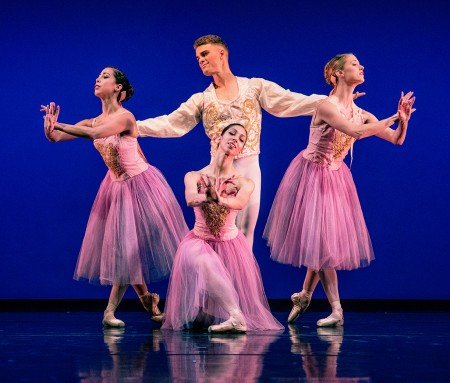 Following Dekkers’ premiere was George Balanchine’s Valse Fantaisie staged by Marina Eglevsky. Danced by Christian Squires, Amanda Farris, Jackie McConnell and Larissa Kogut, this piece was by far strongest technically of the evening. Squires and Farris stood out with Farris expertly executing Balanchine’s choreography – paying meticulous attention to each detail, each position of the hand, each point of the toe – and Squires seeming like an incredible woodland deer able to leap over a fence from a completely motionless state. Squires’ performance was gallant, agile, spry and light footed. The corps (Farris, McConnell and Kogut) were willowy and harmonious.

Like Balanchine’s Apollo, the male dancer in this work has his pick of three beautiful women. Balanchine’s men are far from props; his choreography celebrates their role in ballet and does not leave them to fade in to the background. The corps flit in and out of the wings for duets, solos and to dance as a whole around Squires.

Despite Del Valle’s modestly sized stage, the choreography was masterfully executed. The locale somewhat limited some of the steps that would have been more sweeping and dramatic in a larger venue, however, Marina Eglevsky’s staging adapted the choreography well, and brought focus to all the right moments. Rebecca Crowell Berke’s costumes were comely and saw the ballerinas in ethereal tulle skirts, beaded bodices and hair ribbons, and Squires all in white with a gold trimmed vest.

The beautiful romanticism of Balanchine’s choreography is a bit surprising given there is no ‘traditional’ coupling of the dancers and no real narrative. The fact that his intentionally limited movement vocabulary was applied to such a dynamic effect makes this Balanchine a unique jewel. Set to the lively waltz rhythm of Mikhail Glinka’s score by the same name, it was a poignant arch in the programming of the evening. 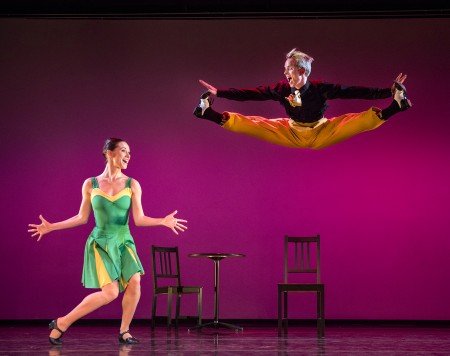 Wrapping up the evening was Sean Kelly’s A Swingin’ Holiday. With a new section of choreography specially added by Kelly for this year’s performance, this piece proved once again to be a whimsical and endearing annual tradition for Diablo. Squires, again, was a standout with partner Jackie McConnell deftly performing a series of thrilling lifts and potentially head-smashing flips with ease and precision. New face Jordan Tilton took up the part of wearing the iconic pink pompom headband and blue and white polka dot dress. A more pixie-like performer than past dancers in the same role, she embodied the winsome part well. A sprightly and spry revue with its brightly colored costumes (Cynthia Sariento), lively accompaniment from Greg Sudmeier with the Diablo Ballet Swing Orchestra, and playful choreography, this piece continues to be a surefire way to mark the beginning of the holiday season.