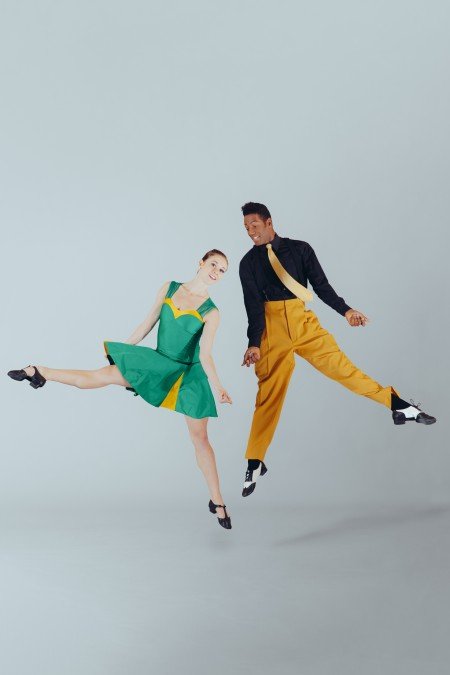 The holidays are about memory and nostalgia: those favorite tunes, childhood dreams, family traditions. Diablo Ballet again delivered a cheerful program filled with sweetness and light to start their 23rd season and kick off the holidays.

The program featured the Diablo Ballet Premiere of Lew Christensen’s classical Airs de Ballet – originally created in 1971 for the San Francisco Ballet. Christensen is noted, among other things, as the first American choreographer to create a ballet danced by an American company, based on an American theme, with music and designs by American artists. Rosselyn Ramirez and Raymond Tilton shone and Airs de Ballet set the festive mood for the evening. Its tuneful score (to the ballet music from Andre Gretry’s opera “Zemire et Azor”) prompts every symphonious movement of the dancers’ limbs. The romantic costumes accentuate the joyful and uplifting choreography. Once again, Diablo held its prominent place in the Bay Area dance community by being granted permission to perform such a special ballet. And the company’s ability to expertly perform a broad range of pieces within one show is always impressive.

Resident Choreographer Robert Dekkers’ Happy Ending was a much anticipated piece (originally premiered in May 2012). Set to the popular music of Pogo, Happy Ending is at the junction where worlds meet. Pogo’s music carries the same fairytale quality of his film sampling sources – the cheerful whimsicality of those childhood Disney movies remixed over a synthetic bass line and drum beats. Though the listener may not consciously recognize the song’s origination due to the fragmented snippets of speech and princesses singing, it evokes deeply engrained sense memory. Dekkers’ choreography fits together around Pogo’s compositions like puzzle pieces. Both choreographer and composer create their pieces with the goal of evoking emotion in their audience and together, are an exemplary pair. Happy Ending “alludes to our never-ending search for happiness”, says Dekkers. With so many strong images bubbling up from childhood memory, it is easy to start drawing parallels with a whole range of references. There are moments when the dancers appear to be blown across the stage by an invisible wind, much like the elephants in Disney’s “Fantasia”, seeming to defy the laws of physics. Even the ballerina’s costuming with sailor buttons on their shorts are vaguely reminiscent of Mickey Mouse. The imagination is allowed to run free while watching Dekkers’ piece and the audience is allowed to immerse themselves in their own joyful exploration of ‘yore’.

The evening concluded with the annual performance of A Swingin’ Holiday, created in 2012 by Sean Kelly (currently the Associate Director of “An American in Paris” on Broadway). Set to the lively music of the 30s and 40s and jazzy renditions of Tchaikovsky’s “The Nutcracker Suite”, and performed live by the sixteen piece Diablo Ballet Swing Orchestra (musical direction by Greg Sudmeier), the concluding piece featured an exhilarating mix of styles including ballet, jive, swing and jazz. The company’s new members showed they could hold their own throughout the night. The audience was duly impressed with the many dips, flips and lifts and the evening concluded with vigorous applause.