Diablo Ballet’s 25th Anniversary season was celebrated with the world premiere of Once Upon A Time, a new ballet in two scenes by choreographer Julia Adam. Set to music from George Gershwin’s An American in Paris and Benjamin Britten’s Young Person’s Guide to the Orchestra and accompanied by the Contra Costa Wind Symphony, Adam created a fairytale remix enjoyable for all ages. Before the performance began, the anniversary celebrations were kicked-off with a film retrospective by Walter Yamazaki with interviews from Artistic Director Lauren Jonas, and founding board member Ashraf Habibullah. Interspersed with archive film clips were touching, often tearful, messages from Diablo alumni expressing their love and appreciation for the company and for Jonas over the years. It was clear that Jonas and the company have made a lasting impact on the dancers and the community at large through their creative work and their youth PEEK community dance programs. Along with Walnut Creek Mayor Cindy Silva, a cast of over a dozen alumni dancers joined Jonas and Habibullah on stage to take a bow and join the celebration. 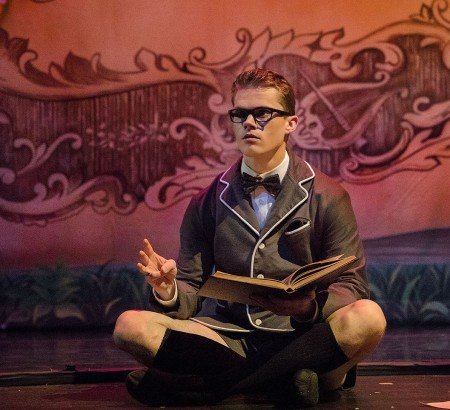 In contrast to Diablo’s typical mixed-repertoire shows, the evening consisted of a single story ballet in two scenes. The first scene opened with Michael Wells as ‘Boy’ in a gray and white school uniform sitting with an open text before an elaborately painted scrim of a storybook and castle. The boy is trying to work out an “equation” for a fairytale, i.e. what happens when you add Little Red Riding Hood plus the Seven Dwarfs, and so on. The scene then changed to a classroom filled with plain white chairs, a teacher’s desk and chalkboard. Boy and a red-caped ‘Girl’ (Jackie McConnell) are the last to join the other students and are scolded for being tardy by the teacher (Raymond Tilton). Distracted from their studies, all of the classroom children dance and play, and the teacher must continuously break up the fun. There is a lively game of musical chairs, and the last two standing are our ‘Boy’ and ‘Girl.’ Obviously enamored of one another, Boy then dances a solo to impress Girl, albeit a gawky version of what a tween might consider a “dance to impress.” They join in a pas de deux – Wells is perfectly awkward and McConnell is the picture of grace; the perfect foil to Well’s boyish character.

Scene 2 transported the audience and characters to the boy’s imagined fairytale world. The stage was transformed with a feast laid out on a large table. Jillian Transon entered as a Fairy Godmother complete with a glittering gown pinafore worn over her schoolgirl uniform, tiara and wand. Then, magically, each of the students from the first scene entered as fairytale characters from a myriad of stories: Little Red Riding Hood, Alice in Wonderland, Sleeping Beauty, Cinderella, Jack and the Beanstalk, and Snow White—all dancing together. Mario Alonzo’s vibrant costume designs were drawn directly from the iconic Disney-esque images that have become a familiar part of our shared cultural visual language. From Cinderella’s blue ball gown and the wicked step sisters’ exuberant feathered head-dresses, to Sleeping Beauty’s pink dress, the audience was able to immediately recognize each of Adam’s intended characters. 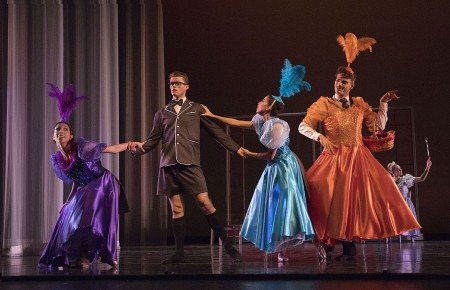 As the fairytale story progressed, Adam created ever-more hectic confusion on stage. Like a living game of Exquisite Corpse, each of the fairytale characters’ costumes became increasingly more jumbled creating amusing combinations: a Dwarf Stepsister, a Big Bad Wolf with a feather headdress, a White Rabbit tangled in a beanstalk. With his perfect comic timing, Tilton stole the show with his humorous transformations from Big Bad Wolf in Granny’s nightgown to Wicked Stepsister in bright orange gown and headdress to Wicked Stepmother of Snow White. Eliciting laughs from adults and children alike, Tilton proved himself an audience favorite despite his role as ‘villain.’ Finally, through all of the growing confusion and cacophony, in true fairytale style, our hero and heroine were able to find each other. The ballet came to a close as the young lovers had their first kiss amid a crescendo of music and surrounded by a shower of red petals.