Last week, the SF/Bay Area experienced a bit of a heat wave. It definitely felt like summertime, at least here. Though if you had the opportunity to check out Diablo Ballet’s final event of the 2020/2021 season, you may have thought it was mid-February. Titled Love Stories, the filmed/streamed program brought together three works that saluted affection, devotion, relationship and gratitude. But really, the bill was a love story to the greater Diablo Ballet community, as the company looks towards next fall/winter and a return to live performances.

The Diablo premiere of Sean Kelly’s Coppélia’s Wedding kicked off the festivities, a seven-movement ballet with classical charm to spare. Each chapter felt very much like a pronouncement of happiness and joy, like one might expect at a wedding celebration. The women’s ribbon variation was delightfully ethereal, filled with intricate petit allegro. Jackie McConnell and Felipe Leon’s duet was equally sharp and buoyant and featured a favorite choreographic moment of contrast. Standing beside each other, she glided into a gorgeous second  position echappé while he delivered a textbook perfect entrechat trois. In addition, their lovely port de bras boasted some inventive heart-shaped imagery. And Donghoon Lee deserves a special mention – a pure revelation in his solo wedding variations. What a technician and what an artist! 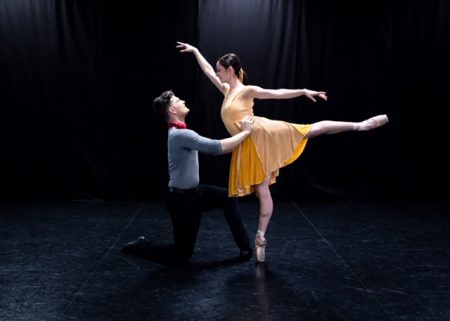 The most intoxicating element of Christopher Wheeldon’s Carousel (A Dance) is the ever-rotating, ever-moving shifts he creates in tone and mood, mirroring the amusement park ride to a tee. Originally created for New York City Ballet in 2002, and premiered by Diablo a few months back, the pas de deux takes inspiration from the 1945 musical Carousel, in music (by Richard Rodgers) and in costume design (by Holly Hines). Rather than expressing a linear narrative, Wheeldon’s duet is more of a collage of emotion and atmosphere.

Dramatic passion imbues the first part of the duet, danced with enviable quality by McConnell and Raymond Tilton. Swirling spins and swooping port de bras bring a youthful, carefree hope to the table. Complete and total abandon arrives in soaring, sky-high lifts. And Carousel (A Dance) concludes with a quiet, sweet connection.

If you look up the term ‘frugivory,’ you’ll learn that it refers to the dietary reliance on fruit and fruit products that some species have. Bruno Roque’s 2019 ensemble contemporary piece uses Frugivory as its title, and it made its Diablo premiere on the Love Stories program. Fruit certainly played a part throughout the work. Apples, a banana and I think mangos rolled across the stage at one point. But the love story that I saw felt like it was about something different. A love story between the beat of the music (by Dead Combo) and the movement in the body. Legs pedaled, fists pulsated, arms swung and feet crawled with metronomic regularity. Being deliberately rhythmic and ultra-precise was the name of the game. Frugivory followed an A-B-A structure, with the first and last sections having a similar dynamic (though not the same phrase material), and the middle portion being the contrast. In the middle part, text was introduced as a new theatrical element in the work, scoring choreography and gesture. While both fun and innovative, it did affect the overall flow, especially of a piece that wasn’t super long.

Though not specifically related to the Love Stories program, I would be remiss if I didn’t laud the marvelous digital season that Diablo Ballet created. Under the Artistic Direction of Lauren Jonas, the Film Direction of Walter Yamazaki and the entire production staff, they managed to newly film the majority (maybe even all) of their season offerings. There’s nothing wrong with screening archival material. But Diablo Ballet’s 2020/2021 season (along with many other companies) shows that not only can new work be safely created in the studio and previous work restaged, but it was possible, even in this bizarre year, to capture and share that resulting art.