The atmosphere seemed different. Outside the theater, promotional merchandise was being set up for purchase and people chatted giddily. A bunch of kids were present, people dressed in bright colors, and there was even a woman with long royal purple hair. Not quite like a rock concert, but most definitely not like walking into the theater to see a classical ballet at the Kennedy Center. DIAVOLO clearly draws non-traditional dance viewers.

Once inside the theater, the differences continued. Jacques Heim, Founder and Artistic Director of DIAVOLO | Architecture in Motion took the stage. He reminded me of a motivational speaker. Well dressed and engaging, Heim, originally from Paris, turned on the charm. He spoke very directly to the audience, and he used a lot of humor. In glowing language, he touted his company’s product: “live abstract paintings.” He also strongly encouraged everyone to drink multiple glasses of wine during the intermissions. I wondered if he was getting a cut of the alcohol sales!

The performance would be loud, Heim promised, and it was. Plus there was an abundance of circus tricks, acrobatics, and drama. Maybe it was more like a rock concert after all, or a Las Vegas show, complete with reverberating techno music and snazzy lighting effects? I’d completely understand if you might question whether what DIAVOLO does is really dance. I’m not going to answer that question here. The Kennedy Center lists it as part of its dance programming. As a dance critic, however, I felt the performance fell short of my expectations. The audience was entertained, though, and seemed devoted. 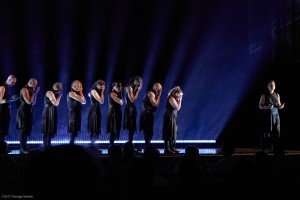 DIAVOLO in The Veteran’s Project, photo by George Simian

The most successful of the three works I saw was The Veterans Project: “A Long Journey Home.” I cannot count how many dance pieces I’ve seen in the last decade that have incorporated veterans and their stories. The arts have a great capacity to heal and create community. Dance is special in its ability to literally pick people up and to be physically challenging. Working with veterans via dance is worthwhile, of course, but it also seems to be a funding goldmine right now, and that’s concerning.

While dance can no doubt bring hope and light to the lives of veterans, many of the pieces I’ve seen border on the exploitive. I don’t think The Veterans Project: “A Long Journey Home” crosses that line, but there were moments, like when veteran Alison Smith sang the national anthem to launch the work, when I felt mildly uncomfortable. Patriotism is fine, but I hold some distaste for when it feels forced. When coupled with deeply touching tales told by traumatized veterans, my patriotism feels mixed due to my embarrassment that our country treats emotional wounds so poorly.

Not surprisingly, unfortunately, many of the dances involving veterans that I’ve seen describe depression and post-traumatic stress disorder. Many of these works have used taped voiceovers from veterans giving insight into the jarring experience of returning to the United States after combat abroad. The Veterans Project: “A Long Journey Home” begins the same way, with taped voices of veterans speaking very personally about their backgrounds, their pains, their triumphs. A diverse group of actual veterans, in black costumes resembling ninjas, pace around and place a hand on another’s shoulder. I worried that might be the extent of the movement that would be offered. Thankfully, it wasn’t. 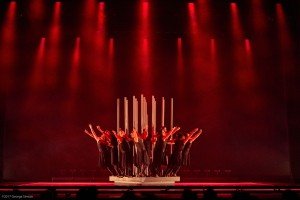 DIAVOLO in The Veteran’s Project, photo by George Simian

Remarkably, the veterans move more later in the work than they do at its start, and they move much more fluidly. They take tall thin tubes and wield them like martial arts instruments, set them into a low-to-the-ground black structure, and weave around and climb the maze of prison bars the tubes form. If you blinked, with the dark lighting, you might have been convinced that some of the veterans were professional dancers.

The courage of the veterans who agreed to participate in this project and perform complex choreography on a public stage was readily apparent. The Veterans Project succeeds in being inspiring due to the impressive level of commitment the veterans display. In my eyes, the veterans bridge the gap between moving and moving while conveying emotion. The professional dancers of DIAVOLO, on the other hand, more often than not, left me feeling cold. They can leap and fly and tumble with aplomb, but executing a series of gymnastic maneuvers isn’t enough to add up to impactful dancing. The less skilled veterans managed to deliver more wallop. I’d hire them for a job anytime. And, in case President Trump is reading this, I’d much prefer to see members of the military dancing than parading through the streets of DC along with armored tanks and weapons.

Passengers, Part 2 of L.O.S.T. (Losing One’s Self Temporarily), was my least favorite of the works presented because the message got lost. Just like I’ve seen countless veterans pieces, I’ve seen innumerable works based on the struggle to find one’s own identity (the program notes read, in part, “Their unrelenting search for identity and self is a powerful reminder that we are merely Passengers on this vehicle called Life.”). In Passengers, the dancers, first in colored t-shirts and pants, then wearing uniform black, largely fail to emotionally connect with each other and the audience. They are lonely and want to assert themselves, but they’re caught in the daily grind. What Heim revealed after Passengers is that it was inspired by his Jewish heritage and images of Holocaust victims packed into trains and literally losing their identities. I saw the work somewhat differently as a result of this revelation, and I wished that this inspiration had been revealed through the choreography. 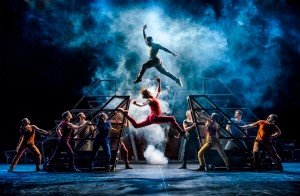 DIAVOLO in Passengers (from L.O.S.T.), photo by George Simian

DIAVOLO doesn’t shy away from relying heavily on props. Indeed, the company’s focus is to “explore the relationship between the human body and its architectural environment.” This distinguishes the company, but it also poses a problem. In both Passengers and Trajectoire, large scale architectural structures play the central role in the performances, and the dancing suffers. When the set is the star, there’s always the danger of the dancing slipping into a secondary role. Because I’m a dance critic, I’m obviously most interested in dancing, not intriguing structures on the stage.

In Passengers, the star architectural structure is composed of moving parts that form, among other things, a train and stairs. The design is fascinating and full of surprises as its moved around. But the dancing is mostly pedestrian, even cutesy at times. Dancers pat their bodies like they’re missing a wallet and mindlessly swing suitcases. It was amusing to watch a “sleeping” woman’s droopy body being passed around, and though it was well done, it didn’t satisfy my hunger for dance. And the high dives off the structure into the arms of waiting men didn’t satisfy my hunger for dance either. 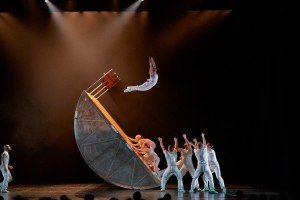 Those lofty dives followed by an emphatic catch repeat ad nauseum in Trajectoire. It’s neat, I suppose, once or twice, but after that, the tossed body loses its power. The structure in Trajectoire, even more than in Passengers, steals the show. A giant rolling half wheel, like a thick wedge of wooden cheese, rocks back and forth constantly. Dancers, wearing all white, slide down and walk up it at steep angles, and also move the structure from within. It’s undisputedly fun to watch for a period of time, but all the wild sliding and jumping and daredevilish teases with dancers on the floor as the structure rolls nearly on top of them gets old fast. For me, Trajectoire is clever spectacle, surely, but not uplifting dance. Trajectoire awakens a playful childish spirit, it just doesn’t speak to my dancing soul.