Shortly after retiring from Miami City Ballet in 2016 after lengthy careers as principal dancers, Jennifer Carlynn Kronenberg and Carlos Miguel Guerra formed their own company. Called Dimensions Dance Theatre of Miami (DDTM), the new company’s mission was to present ballets with a contemporary edge. I can’t speak to the balance of its repertory, but based on the program for its inaugural appearance at the Joyce Theater (and in New York) – and as the opening act in the Joyce’s week-long Ballet Festival – what that translates into is ballet with a Cuban edge. And through most of the program, it was glorious.

The program for this too-brief two performance program included Gerald Arpino’s Light Rain (presented as part of the commemoration of the 10th Anniversary of the choreographer’s passing), the world premiere of a pas de deux for the company’s co-founders, Stepping Into Blue, created by Tara Lee, and two New York premieres – Esferas, a pas de trois choreographed by Ariel Rose, and Septime Webre’s Juanita y Alicia.

In sum, this is already an impressive company with highly competent and engaging dancers. While I was underwhelmed by the world premiere piece, the other ballets on the program were well-chosen, and beautifully executed. 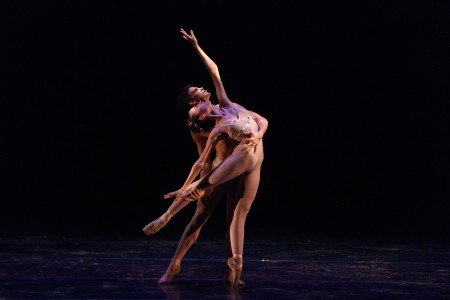 Light Rain is not an unfamiliar piece. It’s performed by many ballet companies around the country and beyond, and is available in whole or in part on the internet. So I won’t dwell on its nuts and bolts. Suffice it to say that it presents the music and mysticism of (primarily) the Indian subcontinent through the filter of California flower power and sexual liberation: not a merger so much as a corruption, but not in a nefarious way. The sexuality in Light Rain is not by any means gratuitous, explicit or prurient (though I suppose some might disagree on that last one) – to me, it’s a form of idol worship crossed with a mating ritual, with the idol being the female body. In any event, Light Rain is consistent with what was then (in the 1970s and 80s) considered groundbreaking contemporary and sensual choreography, and, at least among audiences if not critics, it was one of the Joffrey Ballet’s most popular pieces. [And it was staged for DDTM by Cameron Basden, a former Joffrey ballerina.] That it’s beginning to show its age at 37 isn’t nearly as important as the fact that it’s still eye-opening today, especially if performed by the right cast.

And in this performance, it had the right cast. In the hands of DDTM’s dancers, Arpino’s piece was given a slightly different … dimension. Even though the choreography was the same as I remember it (but, caveat, I haven’t seen it in decades), the dancers gave it a Latin flair: translated, to me, that’s a natural sensuality without any appearance of artificiality. The dance’s highlight is its lengthy central pas de deux, performed by Gabriela Mesa and Fabian Morales. Morales is a commanding, almost feral stage presence, and, at least based on the pieces in which he appeared in this engagement, a highly competent partner. Mesa is another matter. She delivered the requisite flexibility (she must have been filleted at birth), but more than that, she’s a stunning, magnetic dancer who had the audience both gasping and in the palm of her hand. This program didn’t provide the opportunity for her to show more than that (e.g., acting ability; strength; stamina), but she’s definitely a dancer to watch. Of the remaining 12 members of the cast, I was particularly impressed by Trisha Carter, Chloe Freytag, Claudia Lezcano, and Kevin Hernandez.

Tara Lee has impressive credentials: affiliated with the Atlanta Ballet for 21 years, a respected choreographer since 2003, and a co-founder of her own company (Terminus Modern Ballet) in 2017. Perhaps it suffered by following Light Rain, but Stepping into Blue, a Joyce commissioned piece, was not the best of introductions to her work. The first problem was the choice of score: Erik Satie’s Gnossiennes No. 1. Although Sir Frederick Ashton’s Monotones I premiered with the Royal Ballet in 1966 (a year following the premiere of what became Monotones II), the Joffrey made Monotones I and II a staple of its repertory in 1974, which is roughly when I first saw it. Ashton used Trois Gnossiennes for Monotones I, and that series of pieces, like Satie’s Trois Gymnopedies for Monotones II, came to be indelibly associated with those ballets. That’s not a reason not to use Gnossiennes No. 1, but new choreography to it faces stiff competition.

More importantly, the pas de deux doesn’t make sense to me. It’s almost as if, in an effort to craft a romantic pas de deux a little differently, the choreographer made it look silly. This is a romantic pas de deux, but it’s also a pas de quatre, for a male and female dancer and two paint rollers. The dancers, Kronenberg and Guerra, each appear with their own paint roller when the dance begins – Kronenberg’s with a short handle; Guerra’s with a long broom-like handle. They’re together, but preoccupied (particularly Guerra) with the painting (there’s no “paint” on stage; just the rollers). Eventually, Guerra abandons his roller and focuses on Kronenberg. The choreography for the two of them isn’t bad, but to me it didn’t fit the music, and the rollers didn’t fit anything. I assume that the piece – including its title – is “about” the couple “painting” their abode as a metaphor for painting their future lives together (a metaphor for a metaphor for a metaphor), but it was too strained and artificial. 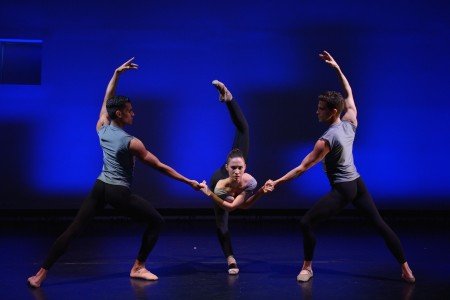 Esferas, on the other hand, is a dynamite pas de trois. The piece, which premiered last year, depicts three dancers as distinct but connecting spheres (“esferas” means “spheres” in English).

But Rose doesn’t limit the choreography to depicting specific spheres. Like Monotones (but a contemporary update, more geometric than celestial, and with an assortment of gorgeous music: Lento by Aleksey Igudesman; Alexander Balanescu’s Aria; and Musica Universalis by Alex Baranowski), the three dancers/spheres come together at times, separate at times, but always maintain their spatial individuality. And, frankly, as much as I admire Monotones, that piece can seem ponderous at times for contemporary audiences; Esferas is to me much more dynamic a dance. It was given a sensational performance by Josue Justiz, Mesa, and Morales.

Heritage, memories, and nostalgia are not unusual topics for contemporary dance, and Juanita y Alicia, which Webre created for the Washington Ballet in 2000, is in that mold. But it’s a very fine example of the genre. 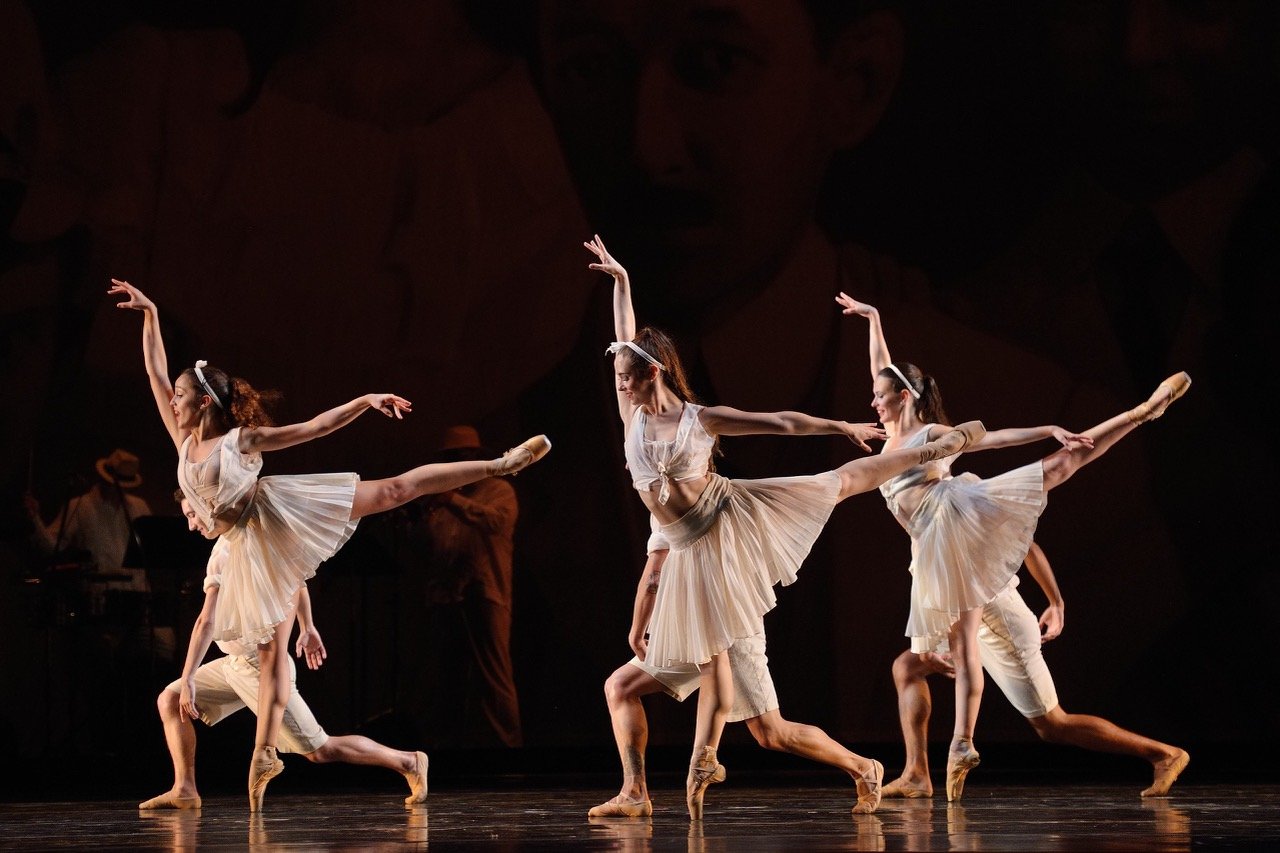 Here, the heritage is Cuban – although I saw in it more of a celebration of the Cuban immigrant community in Miami than a reminiscence. The rear wall (I couldn’t tell if it was a painted scrim or static projection) presents a “typical” assembled photograph of recent ancestors – mostly young girls, presumably from roughly 1920s Cuba — possibly a school photo, or one taken at a family gathering. In front of these images the DDTM dancers celebrate the Cuban cultural heritage. [I don’t know where the title comes from; it doesn’t appear to correspond to any of the “characters” in the dance.]

As fine as the dancers were, and as good as the choreography was (there was a lot of repetition, and the movement wasn’t particularly complex, but the piece had so much variety and was performed with so much enthusiasm that any choreographic deficiencies were hardly noticeable), what made the dance as much fun as it was was the live accompaniment by Alan Garcia and The Latin Power. The music – an assemblage of five traditional Cuban “boleros” of varying tempo and intensity, plus an improvised drum solo by Garcia – frame and impel the action onstage, and complement Webre’s choreography.

It’s a wonderful piece – more celebration of a continuing ethnic heritage than a paean to a culture that no longer exists – and apparently it’s a DDTM signature dance, one that premiered in Miami on DDTM’s inaugural program in 2016. In addition to Justiz, Freytag, Lezcano, Carter, and Hernandez, the superb cast included Stephan Fons, Mayrel Martinez, Eduardo Pi Iglesias, Selah Oliver, Diana Figueroa, Natanael Leal, and Yanis Eric Pikieris.

In a lot of ways beyond related ethnic influence – energy and spirit as well as an outstanding group of dancers – DDTM reminds me of New York’s Ballet Hispanico. That’s a compliment. There’s room for both, of course, and I look forward to DDTM’s return. And after this program, I expect that the wait will not be too long.