I’ve lived in Washington, DC, since 2007. Dissonance Dance Theatre was founded in 2007. How did our paths not cross before now? I’m not sure. It may be because after a few years in the nation’s capital my attendance at performances of local dance companies dwindled. I have a few local favorites whose performances I try to catch each year, but others I admit I’ve completely overlooked. Dissonance Dance Theatre is one that simply didn’t show up on my radar.

I ended up at a recent performance by Dissonance Dance Theatre more or less because of my refusal yet again this year to see any of multiples versions of The Nutcracker. My curiosity was mild, but it grew immediately as I sat in the audience. Dissonance Dance Theatre’s Habibi began with a couple at the front of the stage, Philip Fobbs and Christine Motta, and a quartet in a back corner. Motta, in particular, was a picture of fierceness. Her expressions were bright and ever changing, her movement precise and compelling. The opening music, heavy metal, interestingly contrasted with the dancers, all of whom appeared to be extensively trained in ballet. The closing music was Indian-inspired. In between were mesmerizing music selections from Yo-Yo Ma and the Silk Road Ensemble. This eclectic musical mix flattered the contemporary ballet flavors offered by choreographer Shawn Short, who stated in a program note that he intended to fuse the sounds of the east with dance of the west.

The dancers wore warm shades, the women mainly in wine, the men in orange tops and grayish bottoms, and all had on ballet slippers. Chris Holland’s lightning design played with warm shades, too. I felt the heat. At times, the lighting brought to mind cobblestones on the stage, and at others, shapes on the ground looked like the internal layers of a rose, and those shapes even twirled around. I liked the overall simplicity of the costumes and lighting, especially in light of the complexity of the choreography. Short exhibited quite a range, as did his dancers. From intimate and intricate duets to hard-hitting group sections, Habibi stayed varied and entertaining. 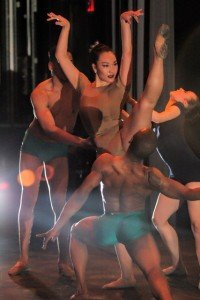 Classical lines abounded, but with some creative flourishes that enhanced the experience of the lively music. Much of the movement involved hands and arms, delicate gestures reminiscent of cultures along the Silk Road. It was in the pas de deux that I sensed the most originality. At one point Motta stood on Fobbs’ thighs, each dancer in second position. Subsequently, she reclined along one of his arms and shoulders as he carried her parallel to the floor. In a quartet composed of two couples, two females mirrored the same movement as the male/female couple closer to the audience, including the lifts. In yet another duet, Momo Sakai and Jaylon Givan danced with remarkable energy and playfulness. Sakai excitedly leapt up and touched Givan’s elevated hand like a basketball player reaching for and slapping a basket’s rim and later waved her hands as he pulled her along on the floor.

In many performances I get a sense that the choreography exceeds the abilities of the dancers, or that the dancers are more skilled than the choreographer. In Habibi, Short’s choreography was undeniably challenging, and the dancers weren’t always quite up to it. There was a sea of extreme extensions, convoluted lifts, nonstop “tricks,” and very little stillness. Despite some wobbles and timing issues, though, Dissonance Dance Theatre’s dancers gave it great effort. Short’s vision may not have been realized as elegantly as he likely had in mind, but it’s probably best that he chose to challenge the dancers rather than creating a work that catered to the least able of the bunch. His choreography struck me as mature, while many of the dancers are still quite young. He’s given them a piece that they can continue to aspire to conquer. 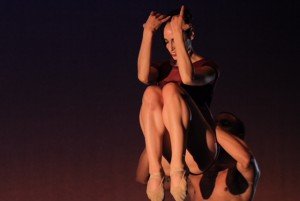 One thing I couldn’t help but notice was that all of Dissonance Dance Theatre’s male dancers are African-American, and the female dancers all have lighter colored skin. I was excited to see so many gorgeous African-American male ballet dancers, but I also wondered where the African-American ballerinas were. It’s a mystery. Dissonance Dance Theatre’s Founder and Producing Artistic Director, Short, is an African-American male who has an M.F.A. in Dance from the University of Wisconsin-Milwaukee,  a B.F.A. in Musical Theatre with a minor in Theatre Management from Howard University, and is a former Professor of Ballet at the Catholic University of America. In addition, he’s the Founder and Director of Ngoma Center for Dance. I hope his dance school will turn out a ton of fine ballet dancers. I have more young African-American ballerinas on my Christmas wish list, and I’ll bet Short does as well.