There may have been someone in Friday night’s City Center audience who didn’t love the Dorrance Dance program, but with the possible exception of some who didn’t want it to end, I doubt it. Simply put, the program I saw (the other two were substantially similar) was one of the finest and most joyous evenings of dance in recent memory. The standing ovation that greeted the company after the final dance’s conclusion extended beyond the orchestra into the theater’s upper levels, and could have continued far longer than it did after the curtain came down, but that’s not a City Center thing. On exiting, there was not a frown to be found.

If there is anyone who has not yet heard of Artistic Director and choreographer Michelle Dorrance and her company of dancers and musicians, suffice it to say that in less than a decade Michelle Dorrance Dance has revitalized tap as a dance art, broadened its scope with choreography that places it on par with that of other forms of theatrical dance, and expanded its boundaries by marrying tap with other forms of dance, and with music not usually associated with it. As I initially observed when I first saw the company, if you think you know tap, think again.

That’s not to say that everything that Dorrance has touched since I became acquainted with the company has turned to gold. At times in recent programs I thought Dorrance, in her zeal to demonstrate tap’s roots and to integrate tap’s cousins into the mix, became too didactic, and in her efforts to take tap into the 21st century and beyond, was pushing an agenda that sounded good on paper, and maybe in rehearsals, and that no doubt appealed to many, but which to me seemed less of a partnership than a shotgun marriage. And I found her recent foray into choreographing for American Ballet Theatre last fall inscrutable and somewhat disappointing.

I say all this to put my reaction to Friday’s program in context. Abetted by two guest choreographers and a guest musician, the program was stunningly well-conceived and executed. Everything worked: the introduction to Dorrance’s choreography represented by a couple of early pieces, Jungle Blues (2012) and Three to One (2011); a smashing world premiere piece, Basses Loaded (a City Center commission); two dances buoyed by the choreography, and the presence of super-clown Bill Irwin, Lessons in Tradition and Harlequin and Pantalone (another City Center commission); and a marvelous dance, Jump Monk, choreographed by legendary tap master Brenda Bufalino. Some may consider the program retro, and perhaps that’s why I found it so appealing. But even if it is, it’s retro with a forward-looking edge. 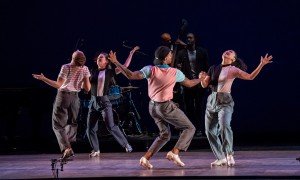 Tap has a long and distinguished heritage, which Dorrance throughout her career has not just acknowledged, but emphasized. But unless one is a scholar of tap, if you think about it, tap is usually associated by an average dancegoer with individual or pair performances as one act among many (e.g., Vaudeville), or as a divertissement in the context of a film or musical theater, or a tv sketch or variety show. The inventiveness and virtuosity was always clear, from Bill “Bojangles” Robinson to the Nicholas Brothers to Astaire and Kelly and Sammy Davis Jr. and Gregory Hines, and especially in those rare situations in which a tap dancer would present a solo evening-length show (a la Savion Glover), but regardless of the particular tap style, to me it seemed more something to appreciate than get enwrapped in. Not surprisingly, the exception, to me, was Agnes de Mille’s use of tap to further the narrative in Rodeo.

Imagine the shock, then, upon seeing those early Dorrance Dance pieces that were choreographed to entertain, and that looked, structurally, a lot like ballet and the best of contemporary dance. There was a broader context of which virtuosity was one component among others, and there was a narrative of sorts. The first audiences to see Jungle Blues and Three to One must have been blown away by the freshness of the experience, and including those dances in this program provides particular insights.

In Three to One, Dorrance is flanked by Byron Tittle and Matthew “Megawatt” West, obviously drawing knowledge and inspiration from the tap experience that they transmit to her. It’s not copycat; it’s more cerebral than that. At the end, the two men depart, leaving Dorrance’s character to make the most of what she’s been given. Even more than the tap dancing itself, the look on Dorrance’s face – a look of both abandonment and opportunity – is universal, and elevates the entire dance to something greater than its tap components.

Jungle Blues is a more complete introduction to the qualities that make a Dorrance Dance performance memorable. Choreographed to the composition of the same name by Jelly Roll Morton, the dance isn’t only an example of tap virtuosity (although there’s plenty of that), it’s a “real dance,” with a defined structure within which are enmeshed the virtuosic solos and dueling duos that seem to an inevitable component of the art form. There’s a “corps” that provides a continually shifting background, featured groups that shuffle in and out of the main area of focus, sub-groups of varying size and composition, and a sense of musicality that makes the choreography an adjunct to and expression of Morton’s multi-faceted composition. In other words, it’s “seeing the music,” except its vehicle is tap rather than ballet or contemporary dance. 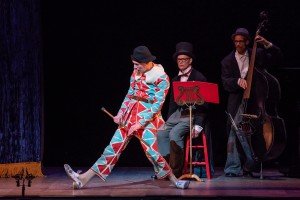 It seems that improvisation goes with tap territory, but it’s clear that even with improvisation, Dorrance’s choreography allows for it rather than either smothering or being dominated by it. And I suppose it’s a credit to both Dorrance and the dancers who improvise that you can’t tell from performance to performance what’s improv and what’s not. But in Jungle Blues, Christopher Broughton is specifically recognized for his solo improvisation, and his solo was audacious and impeccable. Tittle, West, Dorrance, Ephrat “Bounce” Asherie, Warren Craft, and Nicholas Van Young similarly excelled with less extensive solos, whether what they danced was improv or not. Carson Murphy, Claudia Rahardjanoto, and Leonardo Sandoval completed the effervescent and highly capable cast.

These two dances were the evening’s aperitifs. With the world premiere of Basses Loaded, the inventiveness took a step in another dimension.

One of the hallmarks of Dorrance Dance – at least of those pieces I’ve seen – has been the company’s adventurous use of music to inspire and power the dances. It doesn’t always work to my satisfaction (although I must emphasize that audiences have gushed), but with Basses Loaded, it did. The “Basses” of the title are instruments: Double Basses and Electric Basses. Here, to a composition by company musicians Donovan Dorrance and Gregory Richardson, the four dancers (Elizabeth Burke, Luke Hickey, Craft, and Tittle) tap to the varying rhythms and tempi of the score, with the instruments being an increasingly significant part of the stage action. With the musicians initially arrayed upstage left (the Dorrance siblings on Electric Bass, guest musician Kate Davis and Richardson on Double Bass, and Richardson occasionally also on Electric Bass), the dancers at first are driven by the music (with Burke and Hickey particularly memorable), and then, gradually, the musicians change their positions such that they frame some of the action, and then become moving component parts of it, with Davis and Richardson hauling their Double Basses back and forth across the stage (from opposite directions). Instrumentalists have been incorporated into dances before, but I can’t recall seeing anything previously that’s quite like this. If any part of Basses Loaded had been less than stellar, the entire piece might have fallen flat. But the score, the choreography, and the execution (by both the musicians and the dancers) were as flawless as the concept was ingenious. Basses Loaded hit a home run. 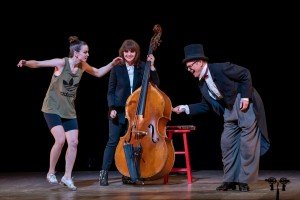 The presence of Bill Irwin on the program was a stroke of genius. Without him the program would have been sufficiently rich. With Irwin’s particular gifts – his connection to tap, his history of rich comedic theater, his performance quality, and the choreography he contributed – it overflowed with talent and good cheer. I did not see Irwin in his legendary Broadway appearances, but somehow, I feel as if I had – by osmosis if nothing else. Irwin’s rare quality of intelligent zaniness penetrates the senses and reveals clowning to be the extraordinary performance art form that it is.

Lessons in Tradition, which Irwin co-choreographed with Dorrance (Michelle), was a 2016 Vail Dance Festival commission. This engagement was its New York premiere. The thin “story” of sorts is the contrast between old-school tap (Irwin) with new tap (Dorrance), but that statement provides no clue as to the piece’s scope and ingenious humor. Any attempt to describe it couldn’t possibly do it justice, so I won’t try. Suffice it to say that Irwin and Dorrance, abetted by Kate Davis and Naomi Funaki, delivered a smashingly entertaining piece of theatrical genius. And although the audience was already well aware of Dorrance and Irwin’s multi-faceted talents, Davis’s multi-dimensional talent (musician, singer, actress, and even hoofer) was a huge, and pleasant surprise. 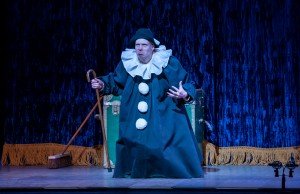 If Lessons in Tradition is “about” the tap tradition. Harlequin and Pantalone, the program’s second world premiere, is “about” the comedic theater tradition. Featuring Irwin’s choreography and libretto, and immeasurably enlivened by his narration, the piece is a non-stop smile — not one of belly laughs, but of recognition that what was being presented was comic genius. Harlequin and Pantalone is a take-off on the standard commedia dell’arte Harlequin story, but it’s limited to the two title characters, and elevated to high art by Irwin’s choreography and libretto, and by the astonishing antics of Warren Craft. Craft has performed in every Dorrance Dance program that I’ve seen, and his tall, thin, bald, ghost-like visage belied the superb quality of his tap execution. But nothing I’ve previously seen from Craft prepared me for his comedic tour de force dual character performance here, providing yet another example of the multi-dimensional talents of the members of this company. While it may be a little short on the dance component, Harlequin and Pantalone is a gem.

And it was succeeded by yet another gem: the evening’s closing piece, the company premiere of Bufalino’s Jump Monk. Like the earlier Dorrance choreography on this program, Bufalino’s choreography here proves what Dorrance herself has been saying so emphatically: that boundary breaking as her choreography is, it is built on a foundation established by others. Jump Monk was choreographed in 1997 for the North Carolina Youth Tap Ensemble, and my understanding is that this is its first performance by a different company.

Trying to describe Bufalino’s choreography, like attempting to describe Dorrance’s, is an impossible task. It could easily have become a jumble of movement to Charles Mingus’s jazzy, percussive, exuberant music, but it’s not. On the contrary, it’s a coherent dance that, as Dorrance did with Jungle Blues, uses tap as a vehicle for seeing the music, but presents it in a form that provides a definite structure of lines and patterns within which the tap creativity explodes with energy. Like everything else on the program, Jump Monk is a celebration, and a joy to watch.

Just as tap is far more than slamming one’s metal-augmented feet to the floor, this Dorrance Program was far more than an evening of tap. At the risk of abusing an already abused metaphor, it was the grandest of grand slams.