I guess you have to be thankful for one night only dance performances because at least you get one night. In this case, it’s a shame, though, that the George Mason University School of Dance students who performed with Doug Varone and Dancers had only one night to shine. A shine they did. Their vibrancy filled the theater, and a happy hum buzzed through the audience after they danced. Of course these young dancers were warmly welcomed at home, but I think anyone, in any location, who saw them dance would have shared the enthusiasm with which their performance was received. 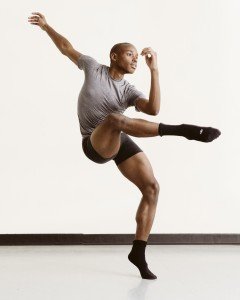 The students were extremely professional and well rehearsed, which speaks well for George Mason University’s dance program. The twelve student dancers stood out, but ironically for the fact that they blended so seamlessly into Varone’s work. Their earnestness and gusto in the “mass” section of Varone’s 2016 work in the shelter of the fold, also speaks well of the trust instilled in them by Varone and his company’s dancers. No doubt the students spent many hours learning and perfecting the choreography, and they delivered a beautiful and touching performance with significant stage time for which they should be very proud.

Varone’s in the shelter of the fold is a work that he says is centered on his ideas about faith. In the beginning, in a section called “horizon,” I could sense something meditative. There were faint chants, perhaps, and six of his dancers were enveloped in an eerie green haze. Dancers touched — a hand on a shoulder, a pair of hands grasped, a hand that lingered on another’s back. In the male duet that followed, titled “folded,” Hollis Bartlett and Bradley Beakes ran backward, kicked, rolled, hopped, and crawled. A somewhat violent and remote relationship emerged. They stumbled and staggered, grabbed at each other and pulled. It was difficult for me to discern whether they were helping or hurting each other. 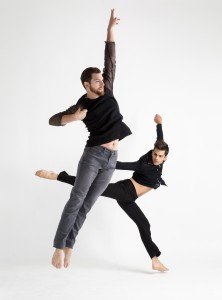 in the shelter of the fold by Doug Varone and Dancers, photo by Erin Baiano

The trio that came next (Jake Bone, Whitney Dufrene, and Aya Wilson) appeared to be composed of people uncertain how to handle their emotions. The three might have depicted parents and child, or a couple and their therapist. In any event, dysfunction seemed to rule, and I did not find any warmth and comfort in the dancing, despite this section being titled “shelter.”

In the final section, called “hope,” the eminently watchable Hsiao-Jou Tang, in a series of resurrections, sat on her rear, got up, and then was on the ground again. It was halting and sad. Mounds of dancers crawled onto the side of the stage like dying soldiers. I’ll just have to believe there was hope.

The evening opened with Lux, a piece from 2006, which radiated an underlying joy (and hope?) that was absent from in the shelter of the fold. The movement swelled to the music of Philip Glass. The dancers wore simple black costumes by Liz Prince, and the lighting design by Robert Wierzel featured a glowing circle on a black backdrop that ever so slowly rose like a sun. My eyes kept going to arms, arms, arms that swept up and over like swimming strokes, a tai chi routine, an orchestra conductor, a calligraphy brush, or a baseball windup. The dancers seemed to orbit around each other, and they moved casually, but with purpose. Their upper bodies were loose and free. They jogged. They almost even bounced, always in keeping with the pleasantly relentless music. Both the music and movement were rich and complex — a familiar and attractive celestial chaos. 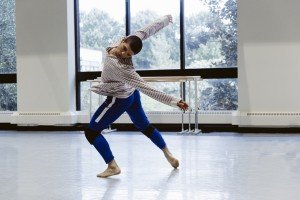 Before intermission came Nocturnes, a pair of solos by Varone for Varone. First was Nocturne in D-flat major, Opus 27, #2, by Frederic Chopin, choreographed in 1987. Varone was then 31 years old. And now he is 61, and this year he created a companion work to Nocturne in E minor, Opus 72, #1. The pair of solos reflects Varone’s continued exploration of pedestrian movement alongside “pure dance.” Varone made his fingers flicker above his head, he grabbed his face, at one point his arms were outstretched like Jesus on the cross. I couldn’t quite tell if weariness was built into Nocturnes, or whether Varone was simply a bit worn down. When someone asked at a post-performance talk whether there was any difference between Varone’s performance 30 years ago versus now, Varone actually bent over with laughter. I can guess that he used to be thinner and have more hair. And obviously, one does not move the same after three decades. There was a tender awareness of the passage of time that came through in Nocturnes and that was enhanced by the appearance of the student dancers later in the program.

It was great to see a young generation of dancers and Varone himself taking to the same stage on the same evening, and to witness the continuation of an important modern dance lineage. I felt hope for the future of dance.