I know there are economic issues, but for its first appearance at the Joyce, the Dresden Semperoper Ballett elected to bring only a fraction of its highly respected company. There’s no way to judge the company’s dancers, or its repertoire, based on this limited engagement. With that caveat, the four dances on the program provided a peek at both, and it whets the appetite.

The opening dance was an actual classical ballet – a rarity for a Joyce program – albeit an excerpt from a larger piece. In 2008, David Dawson choreographed a new version of Giselle for Dresden Semperoper Ballett (“Dresden”). Included was a new pas de cinq to music by Adolphe Adam, Giselle‘s composer. This was its U.S. premiere. 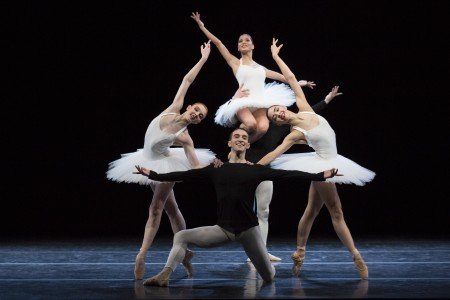 If this music is part of Adam’s original Giselle score, I haven’t previously heard it, and the decision to excise it throughout the 175+ years since Giselle‘s premiere was a wise one: it doesn’t fit with any Giselle musical themes that I’m aware of. If it’s an adaptation of the original (the program does not indicate that), it may fit with Dawson’s conception of the ballet, but it looks like it belongs more as a wedding divertissement in a more elaborate costume epic. It’s not that the music sounds suddenly contemporary: it doesn’t. It’s just too big for Giselle as I know it, but maybe it works in context.

That being said, this pas de cinq, here given the title 5 (perhaps that’s the title when performed as a standalone, but why bother?) feels like a classically choreographed breath of fresh air. It’s expansive, its component dancers (3 women, 2 men) mix and mingle and separate out in various combinations and interesting stage utilization, and the choreography is sufficiently varied so that there is little repetition. 5 is consistently interesting to watch, even out of context – and without any apparent connection to Giselle, it looks liberated. I’ve seen Dawson’s work before – Pacific Northwest Ballet brought his first choreographed ballet following a distinguished performing career, A Million Kisses to My Skin, to New York in February, 2016 – but the choreography here shows considerable growth since that ballet was created. 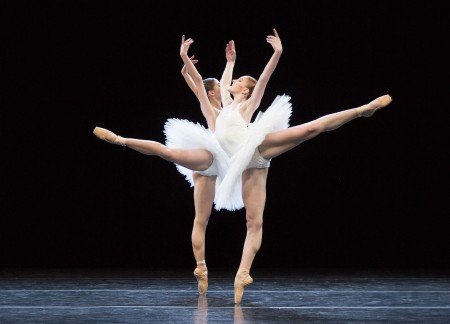 The men (Julian Amir Lacey and Michael Tucker) were a zestful duo when together, and partnered with considerable skill. Of the three ballerinas, Alice Mariani (a First Soloist, and the highest ranked ballerina that Dresden brought) carried the laboring oar, and excelled. Gina Scott and Zarina Stahnke are engaging dancers who showed promise – which Stahnke further demonstrated in the evening’s closing dance.

Dawson was also represented on the program by a 2007 pas de deux exquisitely danced by Mariani and Lacey. To Max Richter’s composition of the same name, On the Nature of Daylight is a beautifully crafted if somewhat enigmatic paean to the idea of love, and features gorgeously simple costumes by Yumiko Takeshima. 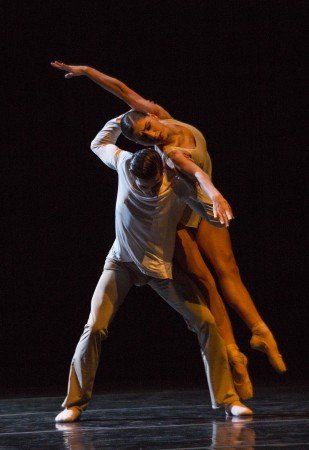 The same music, mashed with Dinah Washington’s song, formed the score for Christopher Wheeldon’s 2012 pas de deux This Bitter Earth (an excerpt from a larger piece). Both dances are extraordinarily moving, and demonstrate the different ways choreographers can approach the same piece of music, and in the process illustrate different sides of the same emotion. With the addition of Washington’s song, Wheeldon’s piece became a celebration of love that overcomes and endures; Dawson’s take is a celebration of love’s essence and discovery.

Joseph Hernandez’s Ganz Leise Kommt Die Nacht / The Night Falls Quietly, is a different dance entirely. It’s well choreographed, but is too self-indulgent (typical of early choreographic efforts) to spend a lot of time trying to decipher. Translated, that means I couldn’t understand what Hernandez, who was trained at the School of American Ballet, was trying to say, or what whatever it is has to do with the myopically millennial program notes included – which, among other things, declare that the ’90s were the last time in living memory that things appeared normal. Really? I suppose it depends on who’s looking – and your definition of “normal.” And if there’s a cinematic side to it, as Hernandez claims but directs to the ’90s, what I sensed was ’40s – ’50s film noir (the antecedents of which included German expressionist film). But even if the dance’s point, if there is one, isn’t particularly clear beyond being generalized angst without a cause, its ambiance, created as much by the accompanying music by Bohren und Der Club of Gore (sort of slow jazz meets death metal) as by the choreography, is.

But the dance is most valuable for the introduction it provided to an extraordinary contemporary dancer. The other three (Aidan Gibson, Francesco Pio Ricci, and Jon Vallejo) did fine work pumping a sense of detached anomie into their execution, but Ayaha Tsunaki, a member of Dresden’s corps, is a force. Whatever she did on stage demanded attention: there wasn’t a single movement that didn’t look impassioned and dynamic, rather than just “there.” Her body appears to have a physically low center of gravity, which is an observation not a criticism, but this made her powerful upper body movement all the more impressive. 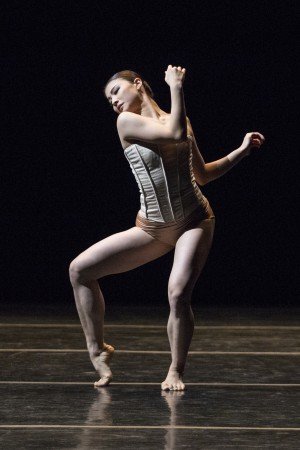 The program closed with the U.S. premiere of Stijn Celis’s Vertigo Maze. To the final (Chaconne) movement of J.S. Bach’s Partita in D-minor for solo violin (BWV 1004), which itself consists of a series of variations, Celis’s abstract, barefoot piece is difficult to pin down. If it was just a matter of bodies moving in space to music, it’s interesting, but on its face (and based on Celis’s program notes) it’s intended to say something. I clearly sense the tension that Celis’s notes indicate, but that (abetted by Kathy Brunner’s costumes – which look like 25th century flexible corsets for the women and matching colored and textured underpants for the men – and Erik Berglund’s shadowy lighting), and crystalline execution by the Dresden dancers, is all there is. If there’s any indication of some lofty illustration of freedom and restrictions thereon (besides the above-referenced corset-like costumes) or some “mysterious labyrinth of the human soul,” as Celis’s notes indicate, it was presented only as cold and emotionless movement that makes the music appear much darker and more portentous than it is. Tsunaki and Vallejo again excelled as the lead pair, abetted by six supporting dancers.

Based on this program, there’s a lot to admire about Dresden Semperoper Ballett’s dancers, and I look forward to seeing a set of dances that may display their talent more fully when they next return.

Melissa Hamilton and Jiří Bubeníček leave everyone breathless in Manon

Albrecht’s farewell: a much loved artist bows out

Retiring ballerina Yumiko Takeshima on her career and designing dancewear