When choreographer George Birkadze was approached by Ballet Philippines to create a substantial new work after having completed two shorter pieces for the company, he jumped at the chance.  Since The Firebird had not been produced in the Philippines for nearly 30 years, and since, as the choreographer has noted, he loves “to tell stories,” the ballet about a magic bird seemed ripe for revisiting. 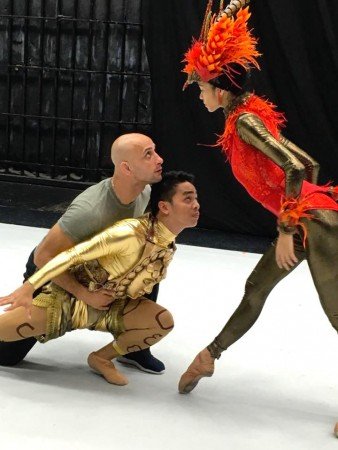 Having premiered in August 2016, Birkadze’s Firebird transports the tale to Asia, where similar mythological creatures abound.  China has the phoenix, for example, and India the peacock.  The Philippine equivalent is a chicken called the Sarimanok, which Birkadze often evokes in his firebird’s movements.

Featuring costumes by Mark Lewis Higgins, sets by Ohm David, and lighting by Jonjon Villareal, the production renames the hero “the pearl merchant from the Silk Road” and his love interest “the princess from the Land of Spices.” The henchmen of Kaschei the Immortal become “golden monster princes,” and the princess’s entourage a group of Chinese porcelain dolls.  According to Birkadze, this Firebird has “an Asian perspective, with Asian leads.”

In the DVD on which the following discussion is based, those leads are Rita Angela Winder, firebird; Garry Corpuz, merchant; Denise Parungao, princess; and Cyril Aran Fallar, Kaschei.

The Far Eastern influence is reflected more in the characters’ titles and costumes than the choreography, which is firmly rooted in the Fokine version.  One significant difference lies in the music.  Birkadze uses the suite that Stravinsky arranged in 1919; it’s shorter than the original score, so his production is more compact and fast moving. 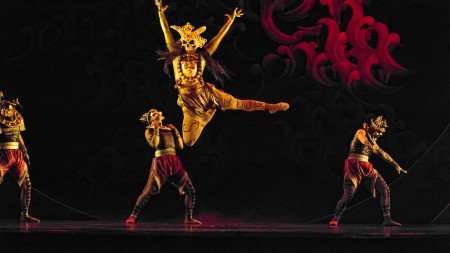 In another deviation from Fokine, this Firebird opens with Kaschei and his retinue (as in the Boris Eifman version) instead of the prince/ merchant.  The change of focus makes sense because Birkadze’s Kaschei sets the plot in motion not only by enchanting the golden monster princes and porcelain dolls, but also by capturing the firebird.  The merchant liberates her, and the firebird’s gratitude, which becomes a deeper attachment, leads to a plot innovation in which the princess and firebird compete for the merchant’s affection.

This rivalry is unexpected since there’s not much in the merchant and firebird’s pas de deux to indicate any romantic feeling.  Near the end of it she gives him a little smile, and the merchant touches his heart and then takes her hand, which would seem to indicate that he is in love with her, but the camera angle is such that one cannot be sure.  Further, although these two dancers have beautiful lines and elevations, they don’t display much facial expression, so the state of their characters’ hearts is unclear. 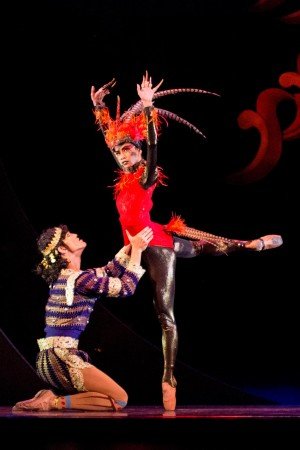 During the berceuse (lullaby), when Fokine’s firebird puts everyone onstage to sleep, calming the danse infernale (which is omitted from the suite), Birkadze has the firebird and princess present themselves to the merchant as alternative partners. Placed on either side of him, the women perform matching choreography, which makes them seem like mirror images and so, on some level, equals.

The merchant has to make a choice, and in short order he faces the firebird, touches his heart and mimes the word “no.”  Then he turns to the princess, and walks offstage with her.  What follows is the most shocking development in the production because the firebird, alone onstage, begins to mourn her lost love.

It’s as if she wandered into the wrong ballet and ended up in a performance of “The Dying Swan” (also by Fokine, to music by Saint-Saëns).  Her hands start to tremble; she raises them to her face, and then, turning away from the audience, bends forward and weeps.  Her grief is affecting, especially since this is a firebird who, until that moment, did not seem to be the vulnerable type. 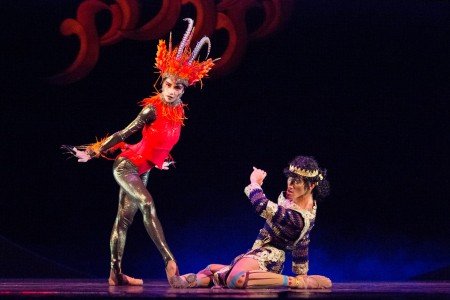 When we first meet her, she isn’t darting around the stage as in Fokine.  She appears à terre, and her presence is formidable.  Soon after, she is caught in a trap set by Kaschei (a ring of translucent fabric that descends over her from the fly space).  The merchant appears and makes a lifting motion, which raises the fabric and frees the prisoner.  Upon beholding the firebird for the first time, he falls to his knees and shades his eyes as if overcome by the sight.

In the ensuing pas de deux, the firebird does not flail against the restraining arms of her captor as in Fokine, but the choreography is similar in that it contains a number of interesting lifts and turns. One of the former is an overhead ascent in which the firebird looks more like an eagle, with wings outstretched, than a songbird.  A second is a lift that ends with the firebird, legs in a split, upside down against the merchant’s back. 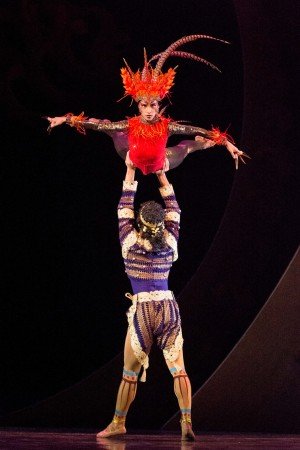 Such athleticism recalls the Eifman version; more Fokine-like are promenades in which the firebird, revolving on one pointe, arches her back as he holds her either by the waist or with crossed hands.  At the end of the pas de deux, the firebird presents the merchant with a feather that will protect him from harm.  In Fokine that gesture is a desperate bid for freedom.  Birkadze makes it an expression of thanks (and possibly love), underscoring the more equitable distribution of power between them.

In contrast to the strenuousness of the firebird is the princess from the Land of Spices.  Her choreography is dainty, with lots of hopping arabesques, single-footed relevés accompanied by delicate little kicks, and a circle of pirouettes.  When the merchant appears, Parungao, who is an accomplished actress, makes the development of the princess’s love for him visible in her increasingly intimate smiles and gestures, and in the way her body starts to melt into his during supported turns. 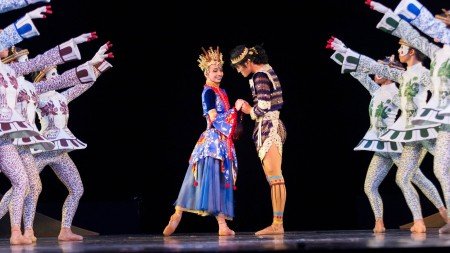 In a charming sequence Birkadze’s princess twice asks the porcelain dolls to turn their backs so she can have a private moment with the merchant, but they’re too curious about what’s going on to accommodate her.  Unfazed, the princess kisses the merchant, and her reaction, a mix of shock and delight, reminds one of Juliet in the balcony scene, except that in this case the woman has taken the initiative.  It’s no wonder the merchant falls in love with her; she’s all softness, coupled with a winning spontaneity.  The firebird is made of sterner stuff.

Higgins’s designs are consistently ingenious and eye-catching, but perhaps his most memorable achievement is the firebird’s headdress.  With its quivering plumes, the thing is almost alive — like an independent character that comments on its wearer’s state of mind.

The costumes of the princess’s entourage: tutu-length white dresses decorated with designs inspired by Ming Dynasty vases, identify them as porcelain dolls. Similarly, the metallic attire of the golden monster princes signifies their greed which, like that of Kaschei, stands in opposition to the generosity of the firebird. 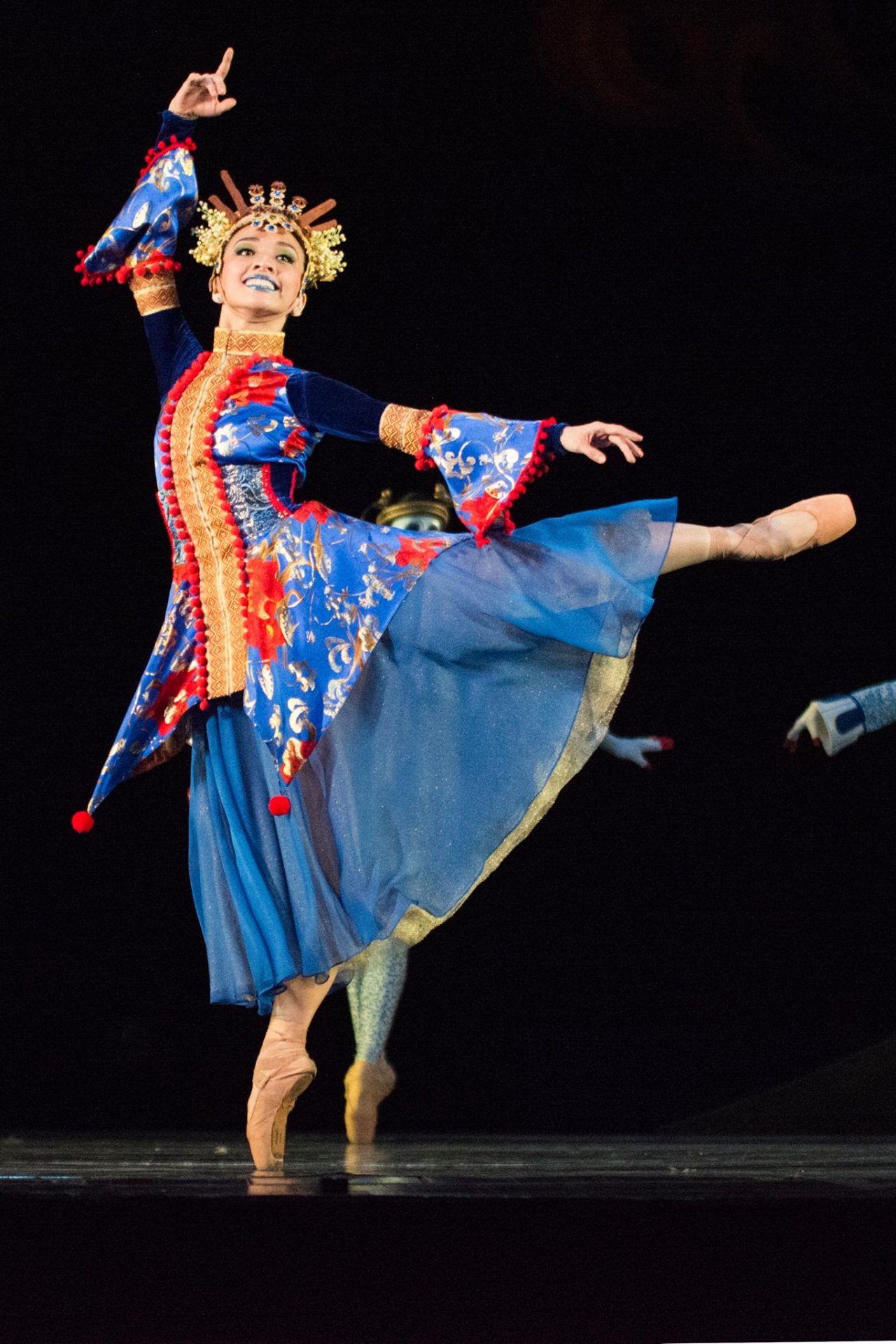 There’s also gold in the headdresses of the merchant and the princess as well as in the trim of his purple outfit and her blue-and-red dress. Their costumes, which refer to India and China, respectively, provide saturated colors that glow against the backdrop.

The last scene completely breaks with Fokine, whose ending is solemnly ceremonial and includes no dancing at all.  Birkadze’s joyous finale evokes, on a much smaller scale, those Petipa created for The Nutcracker and The Sleeping Beauty or even the one Balanchine made for Theme and Variations (Birkadze and Balanchine both being natives of the Republic of Georgia).  Skipping leaps with one arm raised above their heads make the dancers look like fireworks going off as they celebrate the union of the merchant and princess while reinforcing the rhythms of Stravinsky at his most triumphant.

Although their destiny is still determined by a man, the more resilient firebird and assertive princess of the Ballet Philippines production change the way the three central characters relate to one another.  Even more than setting the story in Asia, adjusting the balance of power in that triad is Birkadze’s most radical departure from Fokine, resulting in a Firebird with a slightly feminist slant.

Fighter-Choreographer Ignites New Firebird in the Philippines: An Interview with George Birkadze

“Being a Ballerina”: A Dance Journey Through Memoir