To celebrate the 30th Anniversary of his company, Matthew Bourne has brought back his 2012 programme, Early Adventures, revivals of works from the period 1989-1991 when the company was still touring the country in an old minibus. The works have upgraded sets and more dancers, but preserve the essence of these early pieces. And generally they hold up remarkably well. 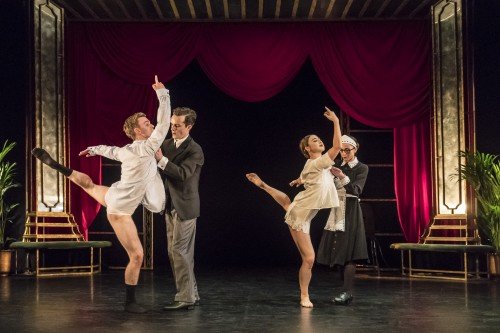 Town and Country from 1991 opens with wealthy friends returning home, piling their coats onto the arms of an almost overpowered maid, while a butler plays the ukulele. A bath scene is protective of the bathers’ dignity with naked legs and arms appearing above the curved surfaces of the two tubs, while dramatic scrubs are provided by the servants. A wistful man looks around and when he sees the coast is clear, reaches for his embroidery, only to be observed by another man who is intrigued and hovers. Eventually their gentle interactions give way to a loving affair. Paris Fitzpatrick catches the restrained yearning of the embroiderer perfectly. A brief, poignant encapsulation of Brief Encounter moves from station to cinema and back with much amusing play . It’s initially a puzzle why the couple is doubled throughout, until the witty end when we see two simultaneous endings one happy, one heart-breaking. 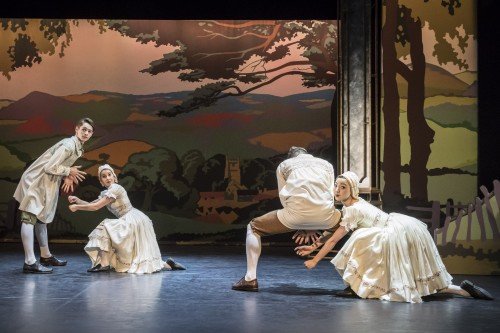 When we move to Country, yokels and hunters take the stage to the music of Percy Grainger, a fine arranger of folk songs. A pas de quatre to his Country Gardens includes folk dance, fingers splayed down for milking and many jumps, hops and kicks. Clog Dance has echoes of Ashton’s La Fille Mal Guardée with two initially reluctant cloggies gathering pace and expertise as the dance progresses. Three little felt animals look on and applaud until the hedgehog is stamped on and after a lingering struggle, expires. The beautiful song, Shallow Brown, provides a setting for an evocative dream sequence of lost love. The final scene The Hedgehog’s Funeral is genuinely melancholy and shows that even at an early stage of his career, Bourne could pluck the heart strings. Town and Country is a comic masterpiece with rich choreography involving the whole body and making more use of arms than is usual in contemporary dance: a “teapot spout” tilting of hands is a regular motif. 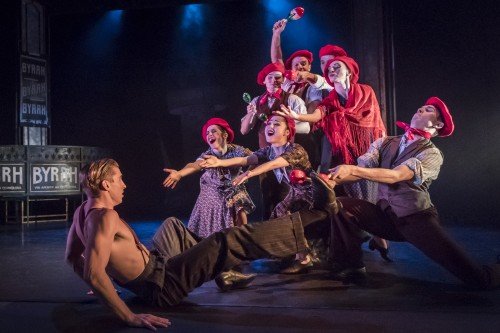 The Infernal Galop – a French Dance with English subtitles was created in 1989 and features much humour at English perceptions of gay Paree in both senses of the word. Galop has a flatter perspective than Town and Country, with less developed ensemble choreography, but jokes abound in the seven scenes set to popular, delightful songs from the 30’s and 40’s. A trio of men eye each other in a pissoir and look suspiciously at their surroundings. When two separate and grapple, their graphic thrustings are interrupted by a street band…repeatedly. It’s all fun, but also a reminder of the bad old days when gays had to be so secretive to avoid harassment. To Charles Trenet’s La Mer, we see a suave man in a blue dressing gown, then with flexed feet he reveals himself as a merman. With joie de vivre, berets and amour, Galop is great fun and captures something of the French spirit.

The show opens with Watch With Mother, located in a school setting, as a group of friends play and pair off except for an isolated loner, but even he is included at the last minute. While Bourne’s choreography makes for interesting shapes and combinations, jokes are thinner on the ground and I much preferred the side-splitting fun of Bourne’s Spitfire which we saw in the previous tour of Early Adventures.

Throughout the evening, Sophia Hurdley’s timing and gestures fitted perfectly with the humour, while Mari Kamata highlighted the beauty of much of Bourne’s choreography. Daniel Collins was outstanding throughout with expressive movement in a wide range of scenes from hilarious to passionate. Bourne has just won two awards at London’s Olivier stage awards and will receive the Critics’ Circle  Distinguished Service to Art award later this month. He has been coming up with the theatrical goods for 30 years and long may he continue.